The East Bay Center for the Performing Arts (EBCPA) was established in Richmond following the murder of Martin Luther King, Jr. in 1968. In the years since it has evolved from a modest music school to a fortress of creativity and hope in the city’s Iron Triangle neighborhood — which has a population of 20,000 and is formed by the various railways tracks that run through downtown, as well as by a history of poverty and violence.

The center, whose outreach programs are well known in Western Contra Costa County, has three objectives: develop school partnership programs; offer free or almost free repertoire and training; and relentlessly engage the community. In the interest of documenting how music changes communities we called Charlene Smith, the center’s director of development. 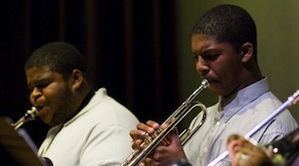 The news, she said, is mixed. On the one hand, fund-raising is ever harder and some programs have been cut back. On the other hand, available programs have never had so many students. In addition, two years ago the Berkelee College of Music in Boston invited one of the center’s students to a five-week, intensive music program, which led to a full-ride four-year scholarship. Last year the college took three young men for the five-week intensive.

She had one other story to make the point that if you can get just one person on their way it may have profound results. The story is about a girl named Simmie.

In 1990, Simmie, then 10, was all but homeless in North Richmond. She and her parents slid from motel to motel, but at one point Simmie’s mother found out about the East Bay Center. The child started showing up, and early on met the incomparable Rae Imamura, one of the original assistant directors of the center, and a well-known player in local symphonies and new music ensembles and, in her last years, known for her collaborations with pianist Aki Takahashi.

“From my first lesson,” Simmie would say years later. “I was in awe of her cultured accent, her long and beautiful dark hair, her royal bearing, and especially, the music she called out of the piano. I wanted very badly to play like she did. So I practiced diligently. Rae taught me so many things about life, that approaching a piece and playing it was how one should approach life. When I’m in trouble, I still hear Rae in my head, giving me advice. What is important, she said, is that you keep going, even if you think you have made a mistake. Make it part of the music.”

Meanwhile, Simmie branched out and took classes in West African music and dance, as well as steel drums and Capoeira, the Brazilian martial art. She took acting classes and became entranced by the arts.

“I wanted to try everything, and the more I explored, the more fascinated I became. It was incredible. I gained a sense of myself, that I wasn’t just a freak with poofy hair and a white mom who didn’t even know who MC Hammer was. I was a member of the community at the center, and also connected to the larger Richmond community. I no longer felt like an outsider, marginalized and alone.”

All the while, Simmie and her family were on the move from Richmond to Oakland and then El Cerrito and then Berkeley; the only anchor in her life was the center.

Eventually, fate pulled a miracle out of its hat. With help from people at the Center, Simmie applied for UC Berkeley, got in, and flourished. She followed an interest to influence community health and was accepted at Yale Medical School. Over the next nine years she got her MD and a PhD.

In 2008, she returned home for a visit and heard that Rae Imamura was ill and so visited her in the hospital.

“We talked about many things over the next few days. I confessed I hadn’t practiced (the piano) in a long time. She said that I hadn’t lost my music, and that I had just had to put it aside for a time to learn a new and specialized language, the language of medicine and healing. She said, We are all connected, in space and in time. And I could see that this was true. Twenty years ago, I met Rae as her student; now our relationship had changed, and I had some knowledge that might help in her medical care. And it felt right that I should have this new role, and I was no longer afraid.”

As for the center, if you live anywhere between El Cerrito and San Leandro you may interested in a new 12-week program for children ages 3 to 5, and their families, which is to say their entire families. March 20 through June 5. Every Wednesday: 9:30 a.m. to 12 p.m. Music, dancing, marching, percussion, painting, clay making… Admission: free.