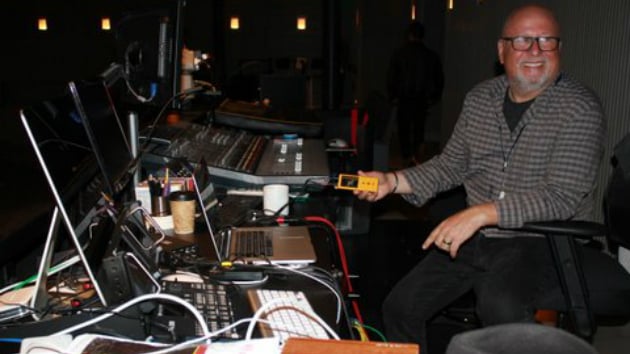 More important than the good money Sam Berkow makes as an award-winning acoustician is his passionate devotion to getting good music heard properly. On that mission, he was thrilled to be involved in designing the SFJAZZ Center, which opened in San Francisco’s Civic Center in January of 2013, and happy to return this month for what he compares to an automotive tuneup.

The vehicle in this case is the center’s 700-seat Robert N. Miner Auditorium, which has comfortably transported fans to a fascinating variety of musical places, most of them in jazz territory but with detours into world music and such classical delights as the Calder Quartet, the Kronos Quartet, and the Philharmonia Baroque Orchestra. (Coming in the New Year: Cameron Carpenter with his self-designed International Touring Organ.) “We’ve learned a lot in two-and-a-half-years about how the space is used, in terms of stage extensions, layouts, and types of music." — Sam Berkow

The tuneup was scheduled for early July, the center’s only “dark” weeks, between the end of the spring season and the beginning of summer sessions. The extended period without performance allowed Berkow free rein to test and tweak, as well as to chat with a curious reporter. “We’ve learned a lot in two-and-a-half-years about how the space is used, in terms of stage extensions, layouts, and types of music,” says Berkow. “We’ve gotten feedback from audiences, from listeners, and from performers.” Some of this feedback is gleaned from reports filed by the center’s house manager and stage manager after every performance.

In addition, “I try to be here for shows as often as I possibly can,” says Berkow, who lives in Los Angeles. “I regularly talk with Jeff Cressman and Masanori Yura, the two senior engineers for the building, and with Cecilia Engelhart, the director of production.” From performers’ feedback “I’m always looking for a balance between what they hear onstage and what they hear from the room.”

Berkow, 53, longed as a young man to hang out with performers, but not to be one himself. "Not only can I not sing, I'm a horrible musician," he laughs. In his freshman year of college, Berkow hooked up with Don Pearson, co-founder of San Rafael-based UltraSound and the audio engineer for the Grateful Dead. “What I learned from Don was, sound doesn’t have to be loud to be impactful,” Berkow relates.

After college, Berkow worked with designer Russell Johnson on a number of classical venues, including the Meyerson Symphony Center in Dallas and the Symphony Hall in Birmingham, England. This job introduced him to Alexander Yuill-Thornton, systems engineer for Luciano Pavarotti and The Three Tenors. “Thorny and I started addressing certain problems of sound reinforcement for classical ensemble, particularly in non-traditional venues,” recalls Berkow. “Later, we started a software company together, SIA, and we wrote a computer program called Smaart, which is the industry’s leading acoustic measurement and sound system optimization tool. And that’s what I’m using here at SFJAZZ.”

In the sound booth at the rear of the Miner Auditorium, Berkow shows how Smaart traces the path of a pulse of “pink noise” (energy equal across several octaves, evoking the sound of surf) as it travels from the speakers arrayed on either side of the stage to a microphone at the rear of the auditorium. The images and numerical data generated by the Smaart program helped Berkow and his team locate surfaces around the room that reflect sound, and to accordingly position the speakers, coordinate their levels of output, and install materials to scatter or absorb sound, as necessary. These materials include permanent fixtures such as slats on walls, and movable elements such as curtains. “As you walk down these stairs, from row M up here to the front row, the difference in level should be less than a decibel-and-a-half [in units of sound pressure].” — Sam Berkow

“The idea is to preserve sound energy, not to throw it away,” Berkow points out. Another goal is to deliver equally true sound to the audience, regardless of where they’re seated. “As you walk down these stairs, from row M up here to the front row, the difference in level should be less than a decibel-and-a-half [in units of sound pressure].”

On stage, the goal is to provide performers with a “null” where they’re effectively hearing each other, rather than the sound being projected into or reflected back from the auditorium.

The particulars of the arrangement can and should be altered to fit the type and configuration of the music being performed. “One of the big differences is that jazz ensembles tend to be smaller, with much more concentrated energy,” says Berkow, “while with orchestral music, you have this energy spread out. And since classical music is not amplified, or lightly amplified, the banners [curtains] would be retracted, so they’re not absorbing any sound. With classical ensembles, I focus on how well sections can hear other sections.” With those differences in mind, one of the things Berkow has been doing during the tuneup is deciding whether some of the sound absorption should be taken out and more diffusion should be put in, to give the room a little bit more life. 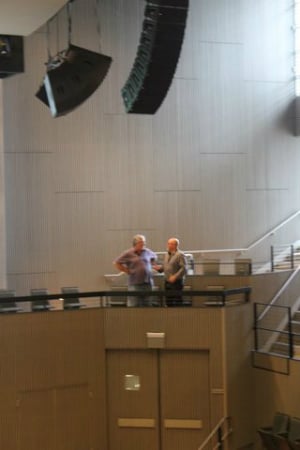 What else has been involved in the Center’s first-ever tuneup? Berkow points up at the two elongated curved arrays of speakers, supplied by Berkeley’s Meyer Sound Labs and hanging far above both sides of the stage. Aside from the vital computer measurements and visualizations, “I want to leave you the distinct impression that critical listening is one of the most important steps — if not the most important — in our process,” Berkow emphasizes. “Your ear is less sensitive at low frequencies, so we’ve added a little bit of energy at the lower frequencies. And we’ve rehung some of the speakers, so there is now more uniform sound for the row of seats behind the stage, and [to] create a null, so they make the stage itself a much more comfortable place to hear.

Such well-tuned sound systems, Berkow notes, “put more pressure on engineers to not make mistakes and pay attention.” He lauds the SFJAZZ crew, as well as the suppliers of the sound equipment (Meyer Sound Labs, Pro Tools developer Avid, and others) as being up to the task. But “the amount of time that most classical ensembles give to their technical people, to learn where the sound is going, is very limited. Do they know that a soprano is going to start singing eight feet away from a microphone, and then walk up to it? If they don’t, and their hand is not on the fader, it’ll be a problem.”

At the beginning of this year, the Smaart program was inducted into the Hall of Fame of the National Association of Music Merchants. “I got a little freaked out when they told me that the first honoree of that award was Thomas Edison,” admits Berkow with a grin. “But the nicest thing is if I tell you that every week for the past 20 years, I’ve gotten an e-mail from a sound guy or an acoustician who says, ‘I used Smaart, and it helped me solve a problem.’”

Will audiences at the Miner Auditorium be equally grateful about the venue’s sound system and its tuneup? “Ideally, you’re not supposed to notice the acoustics,” Berkow advises. “You’re just supposed to listen to some great music and have a great time.”