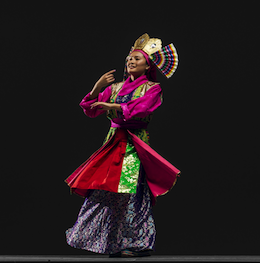 At the Ethnic Dance Festival this weekend, at the Yerba Buena Center for the Arts, one of the groups performing is the illustrious Tibetan opera company, Chaksam-Pa. That means “bridge builder,” and refers to the 15th-century yogi, musician, and engineer, Thang Tong Gyalpo, who built some 58 (or 108) iron suspension bridges in various parts of Tibet. Some still function. According to legend he lived to 125 and "passed away bodily, in the way of a sky-farer."

Which is a nice way to think of a bridge builder — and the father of Tibetan folk opera — at the beginning of the bardo. And now his name has been adopted by a dance group from El Cerrito trying to build bridges of interest in Tibetan Culture and Tibetan Buddhism, as well as an interest in the urgent belief that Tibet is slowly being relegated to a quaint museum of a country, and may one day become merely a Chinese tourist trap.

“We bless the stage,” Tsering Wangmo told us the other day. She’s the artistic director of Chaksam-pa. “And we invite spirits with juniper to purify the air and incense. The goal is to protect deities around wherever we are performing. Then we offer songs and dance and then the story starts.” 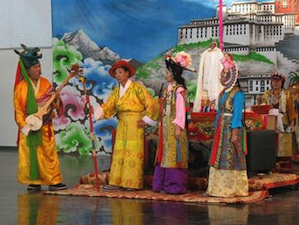 In this presentation there will be no opera, only the prelude.

“But the beginning must be very proper,” Wangmo went on, “and to insure a proper performance we want to keep in touch with the spirits, to make sure they know they are remembered and loved.”

Wangmo remembers going to the opera as a child with her parents, and believing that whatever happened on stage was real. “And I remember that afterwards everyone always seemed so happy. Later, I realized that’s because it is through opera that we carry the Buddha’s teachings, and when we play drums and symbols, and sing high-pitched songs we really feel we are connecting with the spirit.”

Here’s an excerpt from one of the chants in the purification ceremony:

Lying behind the mountain of Shel Drong, A-Ho — what a wonder — the Divine Juniper tree! Incense purifies the air and invites the gods, beautify the gods, spirits come from air, burn butter and bali flour. Chaksam Pa! I sing to you, May these songs and dances entice all minds towards the pure Dharma, path of righteousness.

Wangmo was a student of the great Tibetan opera master, Norbu Tsering. He died in March at the age of 86. 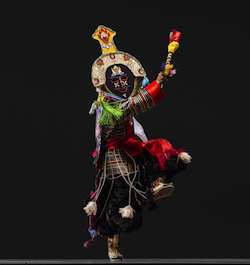 Over the last 40 years Norbu Tsering has been the guiding light of the Tibetan Institute of the Performing Arts (TIPA) and took the opera company on a series of international tours. TIPA is based in Dharamshala, India, which is also home of the Tibetan government in exile.

“We all studied under him,” says Tsering Wangmo, director of the company. “He was a very wonderful person. I really never felt he was my teacher; more like a family member; always funny and loving. He was a huge part of our lives and what we do today is all because of him.”

Wangmo adds that Norbu Tsering, who was known for taking female roles as a teenager, was a master of nuance and comedy, as well as dance, and very adept at including jokes tuned to the times.

“These would be like telling Sara Palin jokes. And some Chinese jokes. One of our operas strongly relates to the Chinese. But these are not negative. We don’t believe in saying negative things in these operas. The Dali Llama always teaches us tolerance. But sometimes the Chinese won’t take it as a joke even if it is meant to be. So there is always the worry they will misunderstand and feel these jokes are born in anger. They are not, but at the same time we are sincere in our effort because our identity, our language and culture, are in danger of disappearing forever. That’s why we do this — to carry on our tradition for the next generation. And now with the loss of our master, we are more determined than ever not to let this go.”

Last year the Chinese Consul General attended the opening night of the festival. Not this year. “Essentially,” says Julie Mushet, executive director of World Arts West, “ they thanked us for the invitation and said that the consulate could not participate with Chaksam-Pa involved because of Chaksam-Pa's support for Tibetan independence.”

Attempts to reach the Chinese consulate to get some elaboration  received no response.

When told that the Chinese consulate would not attend the festival, Wangmo replied, “Yes, of course, they are afraid because we have the truth.”

She added, “Ache Lhamo Opera is an endangered dance-drama form. It’s a unique representation of Tibetan culture but it is changing even in our own country because of the pressures from Beijing. Those who perform in Tibet are trained in Beijing, and so the sound is very different, much more nasal singing and the costumes are different. Now you see more and more the mark of Chinese design.

“They are always making sure that everything is mixed up and confused so that we don’t have any authentic culture left for the next generation. And now all the old masters like Norbu Tsering, are passing away.”

Wangpo has never been to Tibet, herself, but she pays close attention to the news and whenever there is a protest she tries not to miss it.

“They are afraid because we have the truth and they know now in the 21st Century, with the Internet, they can’t lie anymore. Change is coming, I feel very strongly about that. I’m no expert in politics, I’m only interested in culture, but still I feel America should focus on human rights before dealing with China Tell them, ‘if you don’t improve we will cut down on trade’ People need to realize that much of what is made in China is made from prison labor. as a human being, I want to know what I pay for and who made it. Money is not everything.

“Twenty years ago the ‘Tibet problem’ was just our problem, but now that the ‘Roof of the World’ is a source of water for several countries, this has become everybody’s problem. And if something goes wrong, many will suffer. Watch out.”