January 31, Thursday (tonight!) The Oshman Family Jewish Community Center in Palo Alto presents “The Music and the Mirror … Broadway’s Reflection of Our American Life" – Sing-along. Featuring music from the songbooks of great Jewish composers, including Rodgers and Hammerstein, Sondheim, Lerner and Loewe, Kander and Ebb, and, the great Gershwins, George and Ira. For the whole family. If your only singing experience is in the shower, no matter. No auditions or experience required. Tickets: $18 to $25. More information 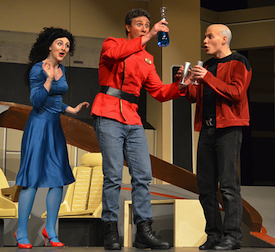 Through February 2, (Saturday) At the Dinkelspiel Auditorium at Stanford University. The Stanford Savoyards present H.M.S. Pinafore, The Next Generation. Gene Roddenberry meets Messrs. Gilbert and Sullivan. Pinafore — which, you may remember is the name of a jumper dress or apron — premiered in 1878 at the Savoy Theatre and ran for 571 performances, a record at the time. The Next Generation has been equivalently popular in its time and some critics consider it the best TV show of all time. Now imagine the quarter deck of the HMS Pinafore as the flight deck of a federation starship, circa 2360. Complete with all the Gilbert silliness and satire, and closeups of class warfare, and a still-terrific score by Sullivan. Tickets: $10 to $20. More Information.

Feb. 2, Saturday, 11 a.m., at the Bay Area Discovery Museum in Sausalito: De Rompe y Raja, the Peruvian Cultural Association that has performed many times at the large San Francisco Ethnic Dance Festival, brings a short program of music, song, and dance to the BADM stage. The Discovery Museum does many concerts like this one, year round, emphasizing “world” music. More information

Feb. 3, Sunday 7 p.m., Zellerbach Hall, UC Berkeley; Feb. 7, Thursday, 8 p.m., Mondavi Center for the Performing Arts, UC Davis. Kodo: One Earth Tour. Taiko drumming is a vividly theatrical art form, great for young kids — not for those scared by loud sounds. This group has been in existence for 30 years and is one of the most admired taiko ensembles in the world. More information/Cal Perfs and Mondavi Center/UC Davis

February 9, Saturday, at First Congregational Church of Berkeley. Young People’s Symphony Orchestra Winter Concert. On the program: Brahms’ Double; Tchaikovsky’s Symphony No. 4. Amos Yang, from the S.F. Symphony, does the solo honors on cello. Along with 95 young musicians, ages 12 to 21, conducted by David Ramadanoff. YPSO is the oldest youth orchestra in the state and the second oldest in the United States. Tickets: $12 to $15. There is also a free outreach concert the next day, Sunday, February 10 at the San Leandro Performing Arts Center. More information

Through February 10 at the Firehouse Arts Center, Pacific Coast Repertory Theatre, and Pleasanton Civic Arts present Rent, Jonathan Larson’s Broadway musical based on Puccini’s La bohème. Instead of Paris in the 1840s, it’s Greenwich Village in the 1990s, instead of tuberculosis, AIDS. Otherwise, besides a gay drag queen and Mimi as an S&M dancer, characters and arcs are close to the original. The show, which opened in 1996, won both a Pulitzer and a Tony. Not for the whole family, one could argue, but for most of the family. It’s about falling in love, finding your voice and living for today. Or think of it this way: If you were going to see the premiere of La Boheme on February 1, 1896, at the Teatro Regio in Turin, who would have taken to see that? This is a musical for its time. Tickets: $17 to $33. More Information.