European culture and government were for centuries imposed by white settlers on the indigenous peoples of South Africa. Along with these imports came both the doctrine and the music of the Protestant church. Blacks not only made skilled and soulful use of hymn books, but they later sought out the popular music of the Americas, ultimately integrating their own traditional approaches to phrasing and vocalization. 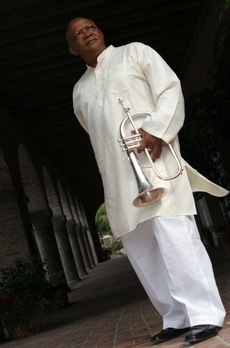 Hugh Masekela: King of the Flugelhorn

The video captures footage of his recent concert for SFJazz at the Palace of Fine Arts, whose assistance was invaluable in creating the video. Also included is footage from several earlier concerts, and an audio interview with 84-year-old Harry Belafonte, a father-figure in Masekela's life, and also one of Masekela's current band members, drummer Lee-Roy Sauls.

For most of his 72 years, Hugh Masekela, born in a segregated township east of Johannesburg and educated at parochial schools, has managed to turn the missionary thing around, blessing the rest of the world with the uplifting and powerful sounds of black South Africa.

He’s fronted symphony orchestras in England, and has been featured at jazz festivals, as he was last Friday, inaugurating SFJAZZ’s Spring Season.

“It might change your whole life tonight,” he advised the crowd of some 750 at the Palace of Fine Arts. He then lifted his gleaming flugelhorn and led his sextet in Stimela, his tribute song, sung in the Zulu language, to underpaid mine workers brought in by train from all over southern and central Africa.

Later in the set, after showcasing his wiseacre wit and agile dance moves, he had everyone in the audience standing and swaying to a happier, syncopated number, Kahuleza. They shared a cheer of delighted recognition when he took up the cowbell to usher in Grazing in the Grass, his brassy and optimistic number-one hit of 1968, which was most folks’ introduction to Masekela and township jazz.

Speaking by phone from his homeland, a few weeks before his San Francisco gig, Masekela recalled his first musical assignment, as a child in the 1940s, cranking his parents’ gramophone to propel 78s bearing the sounds of jazz-influenced American pop and the black South African groups that had adopted jazz, as well as modernized folk songs in the Xhosa language. By age 8, he’d begun classes with a missionary-trained pianist and was learning Bach, Beethoven, Handel, Haydn, Liszt, and Mozart. Four years later he was sent to St. Peter’s Secondary, a boarding school, where he came under the fateful watch of Trevor Huddleston, a white, self-described “Christian Socialist” with a good ear for music.

Huddleston’s opposition to the advent of apartheid, South Africa’s government-sanctioned system of racial segregation, eventually got the chaplain sent back to his native England, but not before he’d formed a popular performing ensemble of St. Peter’s students, including the teenaged Masekela, who admits to having been “in trouble all the time with the authorities.” After witnessing the 1950 Michael Curtiz–directed biopic Young Man With a Horn, with Kirk Douglas portraying the legendary Bix Beiderbecke, Masekela pleaded to his chaplain, “If I can get a trumpet, Father, I won’t bother anybody anymore.” The result of this plea is depicted on the front cover of Masekela’s 2004 autobiography, Still Grazing: He’s shown in a photograph leaping high in the air, grasping a trumpet that had been donated to the Huddleston Jazz Band by none other than Louis Armstrong. 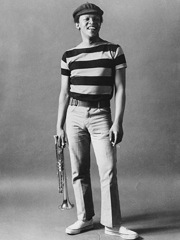 Musical advancement was among the many opportunities forbidden blacks by apartheid — even Armstrong was denied a tour — so Huddleston helped Masekela gain admission to the Guildhall School of Music in London, where he “studied trumpet and theory and took a few lessons.” But his girlfriend, singer Miriam Makeba, urged him to join her in New York, where she’d begun to establish an expatriate career with help from successful folksinger and actor Harry Belafonte. Further urging came through correspondence with bebop trumpeter Dizzy Gillespie, who received his fellow horn player into “the Golden Age of Jazz” on the night of Masekela’s arrival in Manhattan, introducing him to the giants of that genre.

“Dizzy was playing opposite [pianist Thelonious] Monk at the Jazz Gallery,” Masekela recounted. “And down the street at the Friars Club were [drummer] Max Roach and [bassist] Charlie Mingus. I was tired, I was wanting to go to sleep, but Dizzy said, ‘No, no, no, man; I just spoke to [saxophonist] John Coltrane, and he’s expecting you at the Half Note. You can’t go to sleep now!’ And that was my first day in New York.”

With pull from Makeba, Belafonte, and others, Masekela had been admitted to the Manhattan School of Music, where he discovered that “I knew more than most of the teachers. But I learned classical music and how to play the trumpet properly, and composition and orchestration.” Launching his career in his adopted country’s clubs and on its record labels, Masekela found himself among a generation of jazz trumpeters, including Freddie Hubbard and Donald Byrd, eager to emulate Clifford Brown, who’d died in a car crash in 1956 but had left a legacy of “a musicality that hadn’t been heard, ever.”

Masekela yearned to follow Brown’s path into drummer Art Blakey’s Jazz Messengers, considered a springboard to success. “But people like Belafonte and Dizzy and Miriam and Miles [Davis] said to me, ‘You’re just gonna be a statistic if you play jazz. But if you put in some of the stuff you remember from Africa, you’ll be different from everybody.’”

Belafonte, one of the strongest early advocates of what would later be called world music, helped the young trumpeter make money out of his and Makeba’s grounding in the sounds of their homeland. “Hughie was just a great source of talent,” said Belafonte, now 84, speaking from his New York headquarters. “When I called on him to help me find some of the African songs that I wanted to sing and record, and to do arranging, or play, he just filled the space brilliantly. And no other music on the continent of Africa quite resonated with the black American culture as did the South African.” The music and politics of that country made an activist out of Belafonte, which he remains to this day.

Finding a Voice, Defining a Genre

Masekela spanned the North American continent over the course of the 1960s, performing live in San Francisco at the Both/And, a progressive jazz bar on Divisadero Street; at the Monterey Pop Festival; and in Los Angeles at the Whiskey A Go Go, where a recorded, instrumental cover of the Fifth Dimension’s Up, Up and Away got him on the pop charts. After the spectacular success of Grazing in the Grass, Masekela decided to exchange his trumpet for a flugelhorn. “I’d heard Miles play it on this one track, though I don’t remember which record,” he said, probably referring to Miles Ahead (1957) or Sketches of Spain (1960). “I thought it sounded so magical and big. And my trumpet sounded so screechy.” 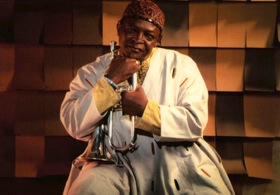 After a brief marriage to Makeba in the ’60s — “We hardly saw each other, which is basically why we broke up” — Masekela pursued other relationships over the next several decades, some of them plagued by one or both parties’ overindulgence in drugs and alcohol. He continued to record on his own and in collaboration with a number of artists throughout the African continent, including Nigeria’s Fela Kuti and Ghana’s Hedzoleh Soundz, and alternated between homes there and in the U.S., meanwhile incorporating songs and stylings from all these places in his repertoire. Masekela remained unable to return to his own beleaguered country, though he expressed his support in song for imprisoned black South African leader Nelson Mandela, and some of his songs became musical rallying cries back home.

He even founded a music school in Botswana, close to South Africa, with European, American, and African faculty imparting a broad curriculum, including Western classical music, to a principally African student body. The school was invaded in 1984 by a renegade death squad, the so-called South African Defense Force, which killed 16 people.

In 1987, Masekela joined Paul Simon in a tour behind the Grammy-winning, South African–flavored album Graceland. The same year, he also contributed to the musical Sarafina!, based on the Soweto uprising of 1976 in which protesting black schoolchildren were gunned down. The show enjoyed a long run on Broadway, and reached San Francisco during a national tour.

After Nelson Mandela’s release from prison in 1990, Masekela was inspired to end his exile. He found that black performers, including Mahlathini & the Mahotella Queens (stars of the bubbly mbaqanga genre) and the soulful a cappella group Ladysmith Black Mambazo, were beginning to play to integrated audiences at home, as well as to burgeoning fans of world music abroad, though conflicts between rival black factions and increases in urban migration and crime were fomenting new troubles in South Africa. After decades of waiting, Masekela staged a home tour.

At the tail end of 1997, Masekela set out to resolve his recurring substance abuse by enrolling in a rehabilitation program in England, much to the relief of his family and colleagues and such long-time friends as Harry Belafonte. “Hughie has put a lot of resources into developing young music students in South Africa, but there’s also something else,” Belafonte pointed out. “He took his addiction and not only cured it, but went on a campaign, very publicly, to say, ‘I was an addict and I tell you these are the dangers and the downfall and the cruelty and the tragedy of that experience, and I beseech you all not to do it.’” 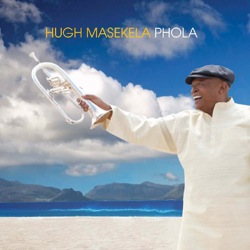 In 1999, Masekela married Elinam Cofie, a native of Ghana whom he’d encountered on a voyage there two decades earlier. (Their love story is celebrated in the song “Ghana,” on his latest release, Phola, whose Zulu title means “to get well, to heal.”) In 2007, the flugelhornist made the first of several appearances with the London Symphony Orchestra and the City of Birmingham Symphony Orchestra, which, he admitted, ruffled his trademark composure.

“It was the formality, and the fact that if I miss something, it’s gone,” he said about his classical excursion. “There was a trumpet concerto [by Jason Yarde, performed with the LSO to celebrate Masekela’s 70th birthday], which was very hard on the chops, with very difficult time signatures and all that. I had to be on the ball, and I was very glad when it was over. But, by popular demand, we had to perform it a second and third time. It was sold out, and the audiences went wild.”

Both South Africa and Masekela garnered renewed international attention in 2010 as hosts of soccer’s FIFA World Cup, with the flugelhornist appearing on stage in Soweto in the opening concert. Over the course of the Cup, he reappeared in a series of vignettes that had him showing off his homeland to his visiting eldest son, Sal, an American-based sports commentator, actor, and singer.

Clean and sober, Masekela now states, “Heritage restoration is my biggest obsession.” His upcoming album, Jabulani, will feature South African folk wedding songs. “Our heritage has been condemned over the years by religion and colonization, and by Western media and culture,” Masekela noted, “and unless African music is owned, produced, distributed, packaged, and sold by Africans to Africans in Africa, you can’t say African music is growing. It’s very important to revive heritage and make it visible, so that when our grandchildren grow up, they won’t have to say, ‘We used to be Africans ... long ago.’”