Here’s a new-new thing: The California Jazz Conservatory — formerly known as The Jazzschool or the Jazz School Institute, or more colloquially, ‘that jazz school over in Berkeley.’ It was, until just recently, a small, unaccredited school, with no formal program of study, and known largely only to aficionados. In fact, the school was perhaps better known for its community outreach program. 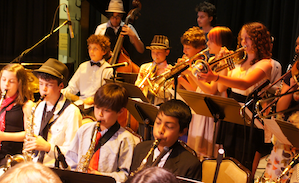 Now, ‘that jazz school’ down in the Arts District in Berkeley has become a fully accredited, four-year conservatory, offering a top-rated faculty — including artist-in-residence, Benny Green, once a member of Art Blakey’s famed Jazz Messengers. The conservatory will offer both financial aid and the ability to provide visas to students coming from abroad. The tuition for four years is about $72,000; the degree is a B.A. in Music with a focus on jazz studies.

“I would like to see this become the Juilliard of Jazz on the West Coast,” Susan Muscarella said earlier this week. She founded the school in 1997, which was originally upstairs from La Note restaurant on Shattuck Avenue. And used her life savings to do it.

Muscarella, who grew up in Walnut Creek, studied classical piano as a child and was performing jazz professionally before graduating from Las Lomas High School, in 1968. Her first jazz piano teacher was Wilbert Baranco, a student of Art Tatum’s. She went on to study music composition at UC Berkeley and, in 1984, became director of the Cal Jazz Ensembles. Her preforming career includes time with Sonny Rollins, Sheila E., and Marian McPartland.

Entry requirements to the conservatory include a high school diploma, or an equivalent, as well as an audition and two placement exams. One exam involves ear training and sight-reading; the other, jazz theory. The audition requires musicians to play a 12-bar blues piece, a Latin tune, a ballad, and some up-tempo swing. Audition times are flexible and can be arranged through the conservatory. Those interested in beginning next fall should try to begin the enrollment process before May 1, although it’s possible to audition after that date.

“I would like to see this become the Juilliard of Jazz on the West Coast.” - Susan Muscarella, founder and director, California Jazz Conservatory

The college now has 63 students. Next fall the number is expected to reach 75 and by the fall of 2015, 120. That will be close to the enrollment limit. Audits will not be permitted.

“I’d like to keep it a small school,” said Muscarella, who describes herself as a strong student advocate, “a school designed for aspiring professionals who want to commit to a rigorous program and who have the will and the dream to become great.”

There have been just five graduates so far; all have gone on to professional careers. Among the 63 students now enrolled, 24 percent are women.

The California Jazz Conservatory is unique in this country and offers an unusual curriculum. Although focused on performance, courses range from the Physics of Music to Entrepreneurial Skills for Musicians.

‘I think it’s very important musicians know how to pay the bills,” said Muscarella, “and how to become entrepreneurs. Young people need to know the ‘business of music.”

And she added, “It’s personally very inspiring to watch these young people grow and develop into the next generation’s masters.”

Classes meet once a week, led by a coach. Rehearsals last for 90 minutes.

At the Jazzschool, while technique and musicianship are taught, there is a very strong emphasis on being musical and interacting with the players around you, which is really what music is about, isn’t it?” — Nora Stanley, student

“We work on playing together as a group,” says program director Erik Jekabson. “We may talk about theory and the role of instruments, but it’s really about developing a group sound and learning to take responsibility for your individual role. Of course, we also do a lot of improvising.”

Jekabson is a well-known trumpet player who appears with many Bay Area ensembles and has taught at the Jazzschool for the last six years. He took his B.A. from Oberlin, his M.A. from the San Francisco Conservatory, and teaches at various music camps, including the Stanford Jazz Workshop.

“I find that a lot of the kids that meet here end up playing together later on,” says Jekabson. “There’s a real sense of camaraderie among the students here. They keep in touch. In fact, we’re thinking of organizing a reunion next December.”

Graduates of the Young Musicians Program have gone on to such schools as The Berklee College of Music, The Manhattan School of Music, Oberlin, and the San Francisco Conservatory. Now, the Jazz Conservatory may become a popular local alternative.

“All too often,” says Nora Stanley, a student in the program for the last seven years — she started in 6th grade — “I’ve seen the soul and expression in music get lost or forgotten in high school jazz education, but at the Jazzschool, while technique and musicianship are taught, there is a very strong emphasis on being musical and interacting with the players around you, which is really what music is about, isn’t it?”