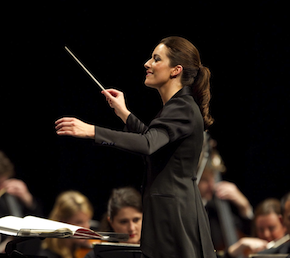 Alondra de la Parra could tell you that this is all no surprise. No great surprise that she would have become a highly praised conductor, much less that she would find her home in the arts. After all, everyone in her family, mother and father, stepmother and stepfather, is a writer, or a ballet dancer, or a singer. No — music was assumed. That was the sound always filling her house. That was the life foretold. But something else is also not surprising.

From the earliest age — she was born in America but grew up in Mexico — she suffered from an acute desire to excel at anything she touched: a ballet bar, a gymnastic ring, a horse, a tennis racquet. Each was pursued with the spirit of a professional, no matter her aptitude. And part of that ambition, which she got from her father, was the command, and the desire, to lead. And to push herself to any extreme to succeed. The truth is, she lives for difficulty, has no fear of failure, and took to music initially just because it was so hard and demanded so much.

And here she is now, at 33, having accomplished a lifetime of feats in the last 12 years, more patient and grateful than before, and more than ever beguiled by the power and sensuality of the music. And perhaps by the familial qualities of the orchestra itself.

But this is also not surprising — that even with all of her success and the praise of critics, even with the moment each night when she disappears behind the music, even then she finds she is alone. She accepted that price a long time ago. It is the artist’s great lament, but this aloneness, on the podium, between orchestra and audience, between notes and interpretation, is unique. And you wonder, how could it coexist with such joy?

This weekend De la Parra appears in Napa Valley at the Festival Del Sole. At 5 p.m. on Saturday night, June 12, at the Lincoln Theater in Yountville, conducting the Sphinx Orchestra. The program features Pinchas Zukerman and James Valenti.

De la Parra is artistic director of the Jalisco Philharmonic Orchestra and has appeared in recent months with, among others, the New World Symphony, the Russian National Orchestra, and Venezuela's Simón Bolivar Youth Orchestra, which awarded her the highest honor it gives to a musician.

We spoke to her the other day by phone. She was in Napa, preparing for the concert. I began by asking about the demise of the New York-based Philharmonic Orchestra of the Americas, which she founded in 2004 at age 23. The orchestra, despite considerable success, suspended all activities on June 3, 2011.

I can tell you that things that should be happening stop happening. You suddenly find yourself being treated differently. And of course you wonder, well, is this happening because I’m a woman? And many times that’s not the reason. It’s just the nature of a career, a very hard career. — Alondra de la Parra

It was not a topic she wanted to discuss. Suffice to say, she said, “We were doing really well, but then at a certain point we were faced with too many challenges at once. And in fact some of these challenges were premature. But that’s enough. That’s all I can say. But I would love to see it revived and there’s no question POA was doing something unique — above all, featuring a repertoire of the Americas, but also our education program in the Bronx and Washington Heights, our composers’ competition, which extended throughout the Americas, and then the two CDs we released, which both attained platinum status. We had a terrific season at Lincoln Center and we had attracted a crowd that I’m sure would like to see the orchestra return. Closing it was so sad, I can’t even tell you.”

And what would it take to come back?

“It would take a group or a large donor. But it would mean a lot of money. We would need a true angel.”

Turning in another direction, I asked about the journey she has made as a conductor into what is still a male enclave.

“What does the glass ceiling look like to you?”

Conducting is always difficult, no matter your gender or age. It’s profession where you have to develop at so many levels, and in a way you are never good enough for yourself or others. Even Riccardo Muti, now in his early 70s, would tell you that, and he is still having a fantastic career and is at the top of his game. I’m 33, and I’ve been conducting professionally for more than 10 years — I conducted my first orchestra at 21, the Buenos Aires Philharmonic — and I can tell you that things that should be happening stop happening. Things get cancelled that shouldn’t get cancelled. You suddenly find yourself being treated differently. And of course you wonder, well, is this happening because I’m a woman? And many times that’s not the reason. It’s just the nature of a career, a very hard career, where there are many obstacles and occasionally you find people are working against you. I would be lying if I didn’t tell you that I have had many frustrating moments where you can only think that there is some prejudice involved.

Is there one particular example that comes to mind?

First, let me say that I am one of the lucky ones. I’ve had many more opportunities than others and certainly my generation has the benefits from those that came before us and opened the doors. I am not a victim. But having said that, I had a whole series of concerts cancelled because I didn’t go to dinner with a particular executive director. I’ve had a concertmaster refuse to play with me, and make it very clear he was uncomfortable with the fact that I was a woman. But at the same time I’ve had just the opposite experiences. So many have helped me, and I’ve never been a complainer. And of course your work should speak for itself ... It’s just that now, I think, it’s time to talk about things as they are.

She paused, ever mindful of the need to balance her critique, ever concerned about how much to say, and not.

I’ve found that the better the orchestra, the better the musicians, the more sophisticated the group is, the less you encounter this attitude, which is good news. Last year, I had a chance to step in at the last minute for the conductor of the Orchestre de Paris. It was a dream come true and I was so amazed at how generous, humble, respectful, and fun every musician was. I had a similar experience with the Swedish Radio Orchestra and the Radio Orchestra of Berlin. These three have among the best people I’ve worked with and that’s what keeps my energy and hopes up.

De la Parra would only add that her comments about a glass ceiling are not part of a feminist agenda. Moreover, her conviction is that women shouldn’t expect special dispensation, and they will only succeed if they adhere to relentless dedication, and if they accept the sacrifice to be a world-class conductor.

“Not everybody can do it,” said de la Parra. “It is only for those with the talent obviously, and those who choose to work extremely hard, and who have had good teachers and good luck.”

As for advice she would offer young women conductors, she referred to her teachers including Kenneth Kiesler, director of orchestras and professor of conducting at the University of Michigan, who told her, “don’t try to be anybody but yourself and that way you will be as authentic as you can be.” Another teacher, and mentor, and the former music director of the New York Philharmonic, Kurt Masur told her, “Be strong. Period. Be strong in your musical ideas, be strong in your preparation, be strong when you face difficulties, be strong when you encounter those who are against you. Be strong facing your weaknesses. Be strong when you realize that conducting is a lonely place….”

“He also told me if you want people to love you and praise you then do something else.”

De la Parra finds that in the last decade she has become more patient and respectful, and more grateful for each time she is on the podium. It is fair to say those are among her happiest moments. But at the time, she told us, “it’s important to say that being on the podium and communicating with an orchestra means nothing — nothing — if you don’t have a life, if you don’t have your family and your friends, and if you are not able to affirm other kinds of artistic expression and other kinds of people and know how to listen not just talk. You must be able to absorb from life the resources to create music and you can’t do that without living. It’s always the danger that you get caught up in just being the maestro. And that whole process takes a long time, months and years. This is not a fast profession. The more you put in, and the older you are, the better you can get. There is no rush.”

And at some point you will have a family?

“Oh yes,” she said emphatically. “Being a mother is something I will definitely be. It’s one of my plans. Absolutely.”

And if Alondra de la Parra says she will see something through, most likely she will.