“The past is a foreign country,” British writer L.P. Hartley famously observed. “They do things differently there.” As an art form that can conjure a mythic realm ruled by a golden ring of power or a president’s counterintuitive trip to a cloistered communist nation, opera seems ideally suited for exploring the strange and wondrous worlds left behind by time’s inexorable flow.

Unfolding in the mid-1980s, a new opera by Berkeley bassist and composer Lisa Mezzacappa and Brooklyn writer Beth Lisick crackles with the odd and disquieting realization that the genie unleashed by the digital revolution has transformed our world beyond recognition. Set in chatrooms at the dawn of the Internet age, The Electronic Lover is an opera podcast unfolding in 10 chapters, starting Aug. 14 with a 37-minute pilot episode that offers a tantalizing introduction to the ongoing work. The Center for New Music in San Francisco hosts a live-streamed Zoom launch event Friday, Aug. 14 at 7 p.m. with the cast and creators.

Featuring some of the Bay Area’s most creative and adventurous vocalists, including Karina Deniké, Michelle Amador, Melody Jeune Ferris and Aurora Josephson, the production sounds unlike anything previously created by Mezzacappa, a long-time creative force on the Bay Area scene known for her expansive track record of multimedia collaborations. With a subtle and often gently pulsing electronic score featuring Jordan Glenn’s fine-grained percussion and understated keyboard and synth work by Steve Blum, The Electronic Lover is by far the most narrative-driven project Mezzacappa has ever undertaken.

She found an ideal creative partner in Lisick, a central figure in the San Francisco literary scene for more than two decades as a novelist, storytelling producer, actor, memoirist, and gonzo spelunker into the world of self-improvement with her 2008 national bestseller Helping Me Help Myself (William Morrow, Harper Collins). Based on the 1985 Ms. Magazine article “The Strange Case of the Electronic Lover” by journalist Lindsy Van Gelder (and used with the writer’s permission), the opera summons an Edenic electronic frontier that feels eons away for the present era, when even the most sequestered American can’t escape hearing about the taunting schoolyard invective flowing from the White House tweet by tweet.

“I’ve always admired Beth as a storyteller and I knew I wanted to do something more dramatic,” Mezzacappa said on recent Zoom session with Lisick. “I actually started with the idea of an opera about Wonder Woman and her creators. I read Jill Lepore’s book The Secret History of Wonder Woman and pulled Beth into that. But we started to feel the world was changing. I started to do a little hunting and found this article from Ms. about women in early chat rooms.”

Aside from her experience shaping stories of all shapes and sizes, Lisick had some direct contact with early internet pioneers covering music for SFGate, Chronicle Publishing’s innovative website that drew content from the San Francisco Chronicle and the Hearst-owned San Francisco Examiner, KRON-TV (Channel 4), and the site’s own staff. Working for John Coate, who helped launch Larry Brilliant and Stewart Brand’s pioneering internet site The Well, she heard tales about how those early adopters first connected online, and in doing research for The Electronic Lover she revisited those stories with him.

“We talked to John a lot about what the relationships were like,” Lisick said. “There was this idea that you cared about people on the other end you were talking to. The community would try to make things right. I’m not a sentimental person at all and I’m feeling pretty jaded these days, but meeting with him again and listening to him talk about the idealism of those early days, it felt very soulful.”

With Lisick serving as the narrator, the first episodes introduce a protean digital world where a women-only dial-up chat room takes shape.  In the conversational piece, “In Another Life,” the central character Margot, a former midwife for a commune (sung by Michelle Amador), lays out her ground rules.

We must be careful with feelings
If we want our world to flourish
We don’t want lords and lurkers
No raging egos, unchecked sarcasm, misplaced anger
Rampant misogyny
Let’s talk about the rules
Let’s share a protocol
Everyone takes responsibility for their own words
Welcome to the intellectual massage that never ends

If Margot’s assumptions seem fated for upheaval and reversal, the opera itself faced even steeper odds. Mezzacappa and Lisick were just about to start bringing all the musicians together when the pandemic made gatherings verboten. The fact that both women live with their sound engineer partners enabled the production to pivot on a dime. Each vocalist and musician recorded their part in isolation, and recording spaces were thoroughly disinfected in between each session.

“We had a whole bunch of rehearsals and workshops planned when shelter in place was announced,” Mezzacappa said. “I was still finishing the music and we immediately wondered, is this over? Fortunately, both of our partners are engineers. We both could go into the studio and breathe the same air. Everyone had to record separately on different days over two-and-a-half weeks of recording. We didn’t want anyone to get sick over this. In the end there was this interesting parallel with the material, in that we had to record this in the same disembodied way that the relationships in the opera unfold.”

Mezzacappa and Lisick are hoping that the first episode attracts sponsors and support for the project, which they’ll record and release as eight more episodes next year. Since the pandemic has pushed people to live more of their lives online than ever before, the world conjured by the opera recedes ever more quickly. In many ways, it’s a realm that feels more distant and remote than the world Mezzacappa explored in her ambitious production about 19th-century women explorers, Glorious Ravage.

A co-production with Brava! For Women in the Arts that premiered at the 2015 Angel City Jazz Festival in Los Angeles, that immersive evening-length song cycle was her most creatively and logistically ambitious project before The Electronic Lover. A rare Bay Area-based jazz artist with a regular presence in Southern California, Mezzacappa assembled a band bristling with renowned improvisers. Her 15-piece Grapevine Ensemble featured visionary musicians from across the state, including Irvine-based flutist Nicole Mitchell, San Diego bassist Mark Dresser, San Francisco trumpeter Darren Johnston, and Berkeley pianist Myra Melford (all prolific and acclaimed bandleaders and composers).

Her latest album, Cosmicomics, features her sextet playing her compositions inspired by the short stories of the Italian writer Italo Calvino, which I described in a SFCV concert review as “a particularly felicitous meeting of music and literature.” She’s been building her multimedia muscles for more than a decade, drawing on her experience producing Mission Eye & Ear, a concert series she founded at the Red Poppy Art House in 2010 featuring musicians performing live scores for experimental films.

A move into contemporary opera is what one might expect from an artist drawn to the unexpected. Looking to compose music for an extended narrative, she’s clearly honed her storytelling chops, knowing that she’ll need to leave her audiences eager for the next installment. The first episode concludes with a rising chorus redolent of a religious chant recorded in a cathedral. “The chanting, with that sense of religiosity, is such a great way to end it,” Lisick said. “It feels both hopeful and really ominous.” 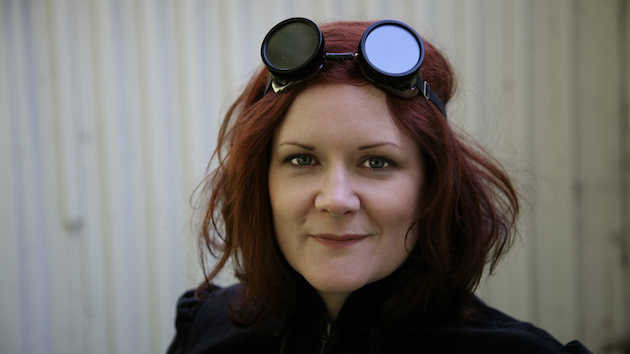