Vocalist, composer, scholar, director, and producer Majel Connery operates at the intersections of classical, electronic, and contemporary music, but rarely, if ever, stands stationary in the crosshairs of genres. Slippery and skewed, her work — especially since departing academia and cushy positions as a musicologist at institutions including University of Chicago, UC Berkeley, and Stanford University — establishes fluid locations that defy normative description.

Evaluating her voice, former critic for The New York Times Steve Smith holds up as comparable the inventive tonality of singer Joanna Newsom. Opera News noted her “Regina Spektor-like delivery.” Her compositional style The Wall Street Journal called “unstuck in time” and once said is simultaneously like Elvis Costello and Schubert. In the world of opera, which, she says, constitutes her primary training but is like a disembodied, inorganic ghost she fights, Connery nonetheless has established a unique, complex foothold. Founding the umbrella organization, Opera Cabal in 2006. "Connery produced and acted in a sensational, world-premiere staging of  Georg Friedrich Haas’s ATTHIS with the  American Contemporary Music Ensemble that included text by Sappho, duct tape, and nudity.” With Oracle Hysterical, the composer collective she created, Connery cowrote and sang on the group’s well-received albums (Passionate Pilgrim and Hecuba). Joining forces with violinist Kristina Dutton, the two musicians formed the duo Hae Voces, whose projects thus far push parameters of the human voice and electronic manipulation into unexpected, eerie-to-ethereal territory.

“Plaudits in the press were validating,” Majel says, about response to ATTHIS. “I created a company that put on this opera and got written up positively in The New York Times not once, but twice. I should have been happy, but I was doing an opera I would never sing myself. I’m good at producing things, but I was getting unhappier and couldn’t imagine a way back into the performance world. I thought that was all I was qualified to do.”

Pigeonholed as a soprano, she twisted herself into knots to conform to the shape of a prescribed, avant-garde operatic bottle. “You have to hold your diaphragm just so — do that weird thing with your abs because the upper range is tightening your throat. I felt like I was being put in a suit of armor. The result was sometimes good, but it never felt organic. I always felt like I was in this weird prison.” The “difficult” music she says takes “10,000 hours of vocal warmups” to maintain and so lacks in beauty that it often caused people to ask, “Can you help me understand this music?"

Which is why Connery, at the age of 39, is veering in yet another direction. Taking a risk by disrupting a career as a highly regarded musicologist, rejecting soprano or other vocal designations, flinging financial stability and health care coverage out the window, Connery is completing her debut, indie-pop solo album. The six-song EP based on poetry by Brad Balliett and Maureen McLane features music written and performed by Connery. Collaborating on arranging, performing and mixing the tracks with drummer Dylan Greene and producer Chris Botta, Connery says the experience is equal parts exhilarating and terrifying. While it’s not straight rock ’n’ roll — like “World I Was in,” a song Connery recently recorded written by First Nature’s Keith Malone and produced by Matt Walsh — it is definitely a significant step off the operatic path.

In one of several emails exchanged in preparation for an interview in late October, she writes, “It’s like wearing clothes for years that don’t quite fit because they were made by someone else, and then suddenly realizing I could make my own damn clothes and feel exactly the way I want to feel! but I only know one kind of stitch, and my sewing machine keeps breaking down, and I only have red and black thread. This album is the first six songs I ever wrote for myself. I don’t know if I’m more terrified that they’re bad, or terrified that they might be good.”

Walsh, a frequent collaborator and one of only a handful of people granted access to a demo recording, says it’s the first time he’s felt challenged as a listener by one of her albums. “It doesn’t feel like classical or pop music to me, whereas previous work seemed comfortable in a niche of the classical world. The closest comparison I can think of is St. Vincent’s “Marrow.” It’s starting to feel less like she’s trying on a new shoe and starting to own the transition more.”

Walsh notes the “undulating seasick rhythms” of a track titled “Lizard.” The drum and bass shift tempo throughout; Connery’s voice, woozy and weird, somehow steadies the ship. “I don’t know where something similar has been done before,” says Walsh. Later, he summarizes, in words likely to meet with Connery’s approval: “I think what Majel is doing is fucking punk rock. She’s doing what she wants to be doing. I think we need more people to question who they are, even when it seems horrific to do it.”

Asked about challenges Connery will face as a woman artist and self-producer, Walsh answers forthrightly. To make a living “making weird records” is difficult for anyone, he says. But Connery has advantages, including stature as an academic and a history of directing and performing successful, “weird” music productions. “I think Majel’s metadata is going to help, not hurt. Majel and Hae Voces are doing great work and the stories around it — her classical transition, that Hae Voces is two accomplished, attractive women playing strange music together — is only going to help. The world likes a good story. Those are pretty good.”

Even so, Connery is plagued by self-doubt. When asked what she does for a living, she’s more likely to say she’s guest teaching at Princeton than that she’s in a band. “That sounds pathetic, like, ‘Oh you do that in your garage? That’s nice.’” Contributing to her wariness about society’s acceptance of professional women artists are the odd, illicit, and recurring replies to a Kickstarter campaign she launched for the new album. “Currently, the biggest struggle is [raising] money. Donations came from men I didn’t know well who wanted then to have a friendly meal with me.” One experience she remembers as “grotesque,” after she realized an eye-popping contribution offer came with strings attached. “It would be nice to have someone who’s insanely wealthy — to pocket $50,000 and not do any work. Integrity keeps me from doing that.”

Unfortunately, regrettable-but-undeniable turmoil arises from worrying about appearance and image as she shifts from a primarily contemporary classical profile to an indie-pop, electronic-leaning music genre. “I worry that I’m no longer young and hot,” she admits.

More sophisticated, complex concerns come from positioning herself as a pop or rock songwriter and composer. Although she often spends 30 hours to perfect 10 seconds of lyrics and Walsh says she has “a great ear for the nuances of how melodies are put together,” Connery doesn’t trust herself outside of a libretto. “Composition is a fraught topic for me. I have training, but in the classical world, being a composer means you can write a score for a string quartet. I don’t know what clef a viola is [written] in: I’d have to Google it.”

Of the tracks on the new album, “August” has the greatest classical connections. There are  viola de gamba, harmonium, and bassoon, along with Connery’s vocals. The piece was recorded in a high-ceilinged church for maximum reverb. Even so, the improvisational structure isn’t conventional, the development section is extended, and the overall sound is more akin to jazz than classical. “I think that my music is going to be weird, no matter what I do,” she says, “but I like the idea of it being accessible.” 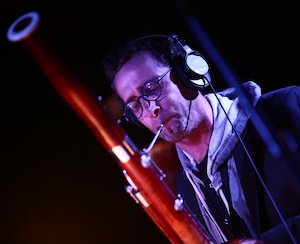 “This Kind of Love” developed from sonnets written by Oracle Hysterical bassoonist Brad Balliet. “It’s about the toxicity of love as it’s about to unwind; as two people are falling out of love.” Helicon software enabled Connery to transform her single voice into as many as four voices on a keyboard. While working on the song, she adjusted the volume ratios, intentionally inviting chaos. “I lost track of where G was, where I was in acoustic space, what key I was singing in versus what I was playing in. The Helicon is robotic, beautiful, and alien. I felt I was writing a lullaby to these very troubling thoughts of goodbye.”

Technology, Connery says, throws up the greatest learning hurdles as she makes the transition. “I spend a lot of time wandering around Guitar Center, crying. I’ve bought a lot of things that are exactly the wrong things. I spend hours on message forums, trying to figure out how to hook up systems.” 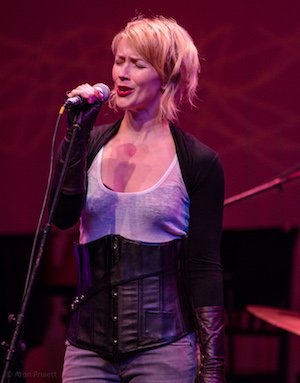 When she’s not questioning herself, researching the latest electronic gear, making final updates to the new album or keeping afloat ongoing projects with Hae Voces and Oracle Hysterical, Connery bounces between bi-coastal homes in Brooklyn and Berkeley. Often on planes or in airports, she listens for inspiration to Radiohead, Grizzly Bear, opera-singer-turned-indie rocker Shara Nova, composer Julia Holter’s bold, sometimes shocking classical-bass-electronic-produced music, or recalls Kaitlin Aurelia-Smith’s “on-her-own-planet” live performances that Connery says are “in the same family as the kind of music I want to make.”

But Connery will not turn copycat or seek security by retreating to past success. How will she know she’s on the right? One way is the cry test. “I get my songs, these six songs, stuck in my head, just like I do the music of people whose songs I admire. When I fall in love with my own songs, it excites me. I start to cry, listening to my own music. It feels embarrassing, but it makes me think maybe other people will feel the same way. That thrills me. I might be making music people [will] want to listen to over and over again. That’s like a tombstone thing: that’s what I want.”