Songs about the nativity of Jesus were first heard in Rome in the Fourth Century. A thousand years later — with encouragement from St. Francis of Assisi — a tradition of Christmas music reached Northern Europe. And then, another five hundred years after that, on Christmas Eve afternoon, 1818, an Austrian Catholic priest named Father Mohr brought a poem he’d written to his friend, Franz Gruber, a choir master, who put words to music, using his guitar, and wrote Stille Nacht. It was first performed that night and suggested a less somber, more melodic tone than some of the original, liturgical Christmas music. 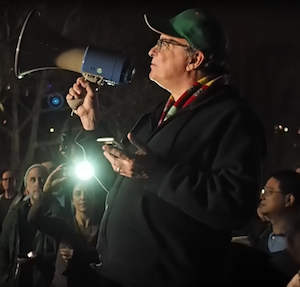 In December 1992, New York composer Phil Kline — best known for his experimental electronic sound sculptures, as well as such "political music" as Rumsfeld Songs — introduced a kind of flash mob, caroling promenade with his Unsilent Night. It was a 40-minute piece written specifically to coincide with a walk through Greenwich Village, from Washington Square Park to Tompkins Square Park. The actual music, written in four parts, was played through cassette recorders and boomboxes, which carolers carried down the street in their arms or dragged along in little red wagons.

“I even had the music rise and fall,” Kline told us the other day in a phone interview, “and it would be louder and more aggressive when we crossed large avenues and quieter in alleyways.” Kline never imagined how the idea might spread to other places; San Francisco was one of the first.

This year, on Saturday, December 10, Unsilent Night will unfold in San Francisco once more, starting in the Mission District of San Francisco, in Dolores Park. It will start at 5 p.m. and last about one hour. Rain or shine.

“Actually, I was surprised to find that the music I’d written for New York worked just as well in other cities,” Kline told us. “That was particularly true with San Francisco, where we would start in Dolores Park and wind our way through the Mission, Castro, Noe Valley. It was this beautiful, rolling walk and people would wave from their windows as we went up these hills the walkers would spread out and you looked back you’d see this ribbon undulating with the topography and at one point, before coming back to Dolores Park, you could see downtown all lit up. It was just so beautiful.”

Unsilent Night will occur in more than 30 cities this year, including Hong Kong, Vancouver, and Hamburg.

A Work No Longer in Progress

When he first wrote Unsilent Night, in 1992, Kline imagined a work always in progress.  There are four sections, which he would periodically refine, but in 1998 he decided the piece was finally finished. Since then has focused on how to incorporate technical innovations in the delivery. 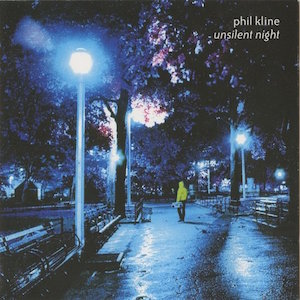 “The Smart Phone saved us,” said Kline, “along with the development of really good little bluetooth speakers, which cost about the same as a cheap boombox used to and really rocks.”

In recent years, the event has waxed and waned. It has caught on in some new places around the country, but not in others: New England, for example. As for San Francisco, it has become “a little precarious” as Kline put it. Curators and organizers come and go, but now the San Francisco Contemporary Music Players has taken it over and that bodes well.

“The thing about San Francisco is that they’ve always treated this as almost a spiritual happening. The first year I went out there I remember people came up to me and said, ‘we love your march for peace. ‘A march for peace?’ I thought to myself. ‘Oh well, thank you very much,’ I said. ‘I’m with it, I’m on board with that.’

“I’ve always seen it as a way to spend an hour with friends and just ‘peace out.’”

Beyond Unsilent Night, Kline is known for compositions inspired by current events, most notably Rumsfeld Songs and Zippo Songs — taken from thoughts etched in the zippo lighters carried by soldiers in Vietnam. “One of the most brutally frank song cycles ever penned,” said The New Yorker.

“It was actually going rather nicely. I liked the music; it was similar to the Rumsfeld Songs, but then at one point I found myself kind of stuck. I wanted to reach a certain place in the music but then something made me stop. I realized later that the whole way I was watching this phenomenon unfold had changed. It was no longer anything that could be finessed or made fun of the way we did with Rumsfeld. I actually started to feel dread so I backed off.

“But then recently, actually just in the last few hours, I spoke to someone about going back to the subject, but with a different attitude.”

Not the attitude seen in Rumsfeld. “I hated what the man stood for but he was very funny.  The press conferences that I set to music reminded me of the way very clever managers of sports teams talk in an interview. Basically, they’ll say something entertaining and then later you realize, ‘wait a minute, he didn’t answer the question.’ Which is kind of what Rumsfeld used to do.

“But with Trump the laughing days are behind us, and that’s why I’m trying to think of a new approach. For example, I’ve been thinking of the Weimar cabaret, Brecht and Weill, Hanns Eisler and those guys. Because they were dealing with something more like this.  Also, the Rumsfeld Songs are pretty; they’re kind of delicate. I don’t think what I come up with for Trump will be like that.” 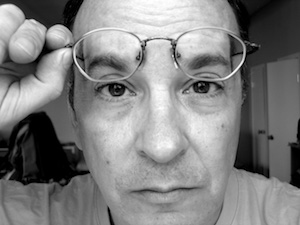 As for the broader question of how politics affects music these days, Kline said that from his vantage point young composers seem apolitical. “They’re modern but they’re conservative; their music is very refined, very polished, and neat as a pin. I can think of a few composers who get into this kind of thing but right now I don’t see a strong current of political music. Does it matter? I often think of Peter Cook’s reply to this question: ‘there’s never been better political comedy than the Weimar cabaret and look how they stopped that Hitler fellow right in his tracks.’”

Kline went on to talk about the conservative nature of the music establishment. “Have you ever been involved with those online projects? It’s the old-fashioned, newsgroup format and there are some that deal with classical music. It’s the kind of thing where you can go and ask, ‘does anybody know about the quality of this Melodiya reissue?’ But these guys, who know their classical music inside out, are so waspishly, nastily conservative. Their politics are despicable.

“Now most of the classical music lovers I know, they’re my friends and quite on the other side of things. Many of us grew up thinking that the spirit of Beethoven was the same as the spirit of the French Revolution: liberté, fraternité, that kind of stuff. And yet, classical music is clearly a vessel that can be used by anybody, including monsters. Or, put another way, great food can be eaten by lousy people. But it’s still oxygen to me, I still need it.”

Unsilent Night Carolers are invited to meet on Dec. 10, at 5 p.m. at the tennis courts in Dolores Park. It’s the corner of 18th Street. Rain or shine. To make the most of the moment bring a boombox with which you can play a cassette, CD, smartphone, or mp3. Some people bring laptops with speakers on a wagon. Cassette tapes are provided for old-school boomboxes. You can download the Unsilent Night Phone App and hook up to Bluetooth speakers or else stream via soundcloud.com/unsilent night. For more information about downloads, parking, and transportation, go to the SFCMP Unsilent Night page.