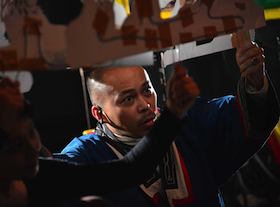 The Aynu (or Ainu) are the ancient, indigenous people of Northern Japan (especially Hokkaido) and Russia, with a culture dating back to 1,200 BCE. (The Äynu in China are not related to Japanese Ainu.)

The Hupa-Yurok-Karuk are indigenous people of California, located in the northwestern corner of the state, in Humboldt and Siskiyou Counties.

Reed is presenting a fascinating show about the intersection of ancient cultures.

The shows, in Fort Mason, are scheduled Jan. 15-19. "Poro Oyna: The Myth of the Aynu" tells an episode from the creation legend of Aynu Rakkur rescuing the Sun Goddess from an evil monster, and restoring order in the land of humans. 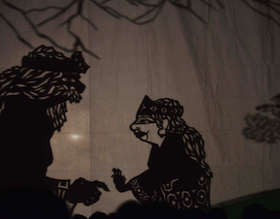 The story is adapted by Tetsuro Koyano, a multidisciplinary performer and shadow artist in Tokyo, and OKI, an Aynu culture bearer and musician specializing in the traditional string instrument tonkori.

Under Reed's direction, the show is expected to be his usual combination of live action, film, puppets, silhouettes, masked-actors, and cutout sets.

The play will also feature shadow design by Kawamura Koheisai and live performances by OKI and Marewrew, a four-woman chorus group specializing traditional Aynu songs, and Urotsutenoyako Bayangans, a shadow theatre company based in Tokyo.

"Poro Oyna" will be performed in Japanese and Aynu with English narration, and some shows will feature a sing-off between Aynu musicians and a group of Hupa-Yurok-Karuk singers, called called "la hau nun sa."