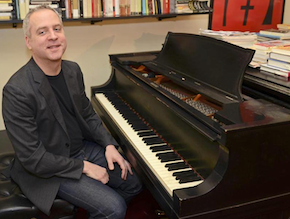 The promo for Jeremy Denk’s upcoming recital at the Mondavi Center for the Performing Arts at UC Davis lists his bona fides as: MacArthur “Genius,” blogger, Musical America’s 2014 Instrumentalist of the Year.

You'd assume that the whole genius thing just takes care of itself. But how does Denk manage a more or less nonstop concertizing schedule, writing essays and reviews for The New Yorker and The New York Times, and a Random House book deal (his forthcoming memoir Every Good Boy Does Fine is slated for publication in 2015 or 2016)? I asked this self-avowed expert at procrastination, how he balances, prioritizes, and gets it all done

[Jeremy Denk:] I generally find that I have to either be, on any given day, either a pianist or a writer. It’s very hard to do a good day’s work on either, and then plow into a different brain space. But sometimes I’m practicing and something occurs to me and I’m able to write down a little snippet. That’s how the blog got started in the early days — just snippets, and then when I would have free time in the airport, or whatever, I would sort of develop whatever it was, polish it up.

[Lara Downes:] Do you find some synergy in the creative processes of writing and playing — tools you use in common for both?

When you’re practicing the piano you’re more in tune with your body, … while the most physical part of [writing] is more about when you’re going to brew the next cup of coffee.

Well, I do try to let the playing and the writing feed off of each other. They both require imagination and discipline, in sort of equal parts. But when you’re practicing the piano you’re more in tune with your body, thinking about fingers and wrists and arms. While writing is more in the head, and the most physical part of it is more about when you’re going to brew the next cup of coffee. Which is a different concentration, I guess.

I find that writing and practicing have a kind of tempo in common. When you’re starting a new piece of writing, or learning a new piece of music, you sort of muck about for a while, and then suddenly a shape reveals itself and the thing makes sense to you.

That does happen a lot — I find I have the same experience. And sometimes it takes a long time mucking about, to have the shape appear to you. That’s what I’m doing now with my book — mucking about. Waiting for shape.

Writing and playing piano are both such isolated disciplines. I think, for most of us, external motivations and deadlines are important factors in doing the work. But there are people who work for years on an 800 page novel, without a book deal. Would you write, and would you play the piano, if no one was specifically waiting for you to produce something?

Piano playing is really a deep kind of physical and emotional need for me, on top of being my profession. And I think talking about music has become equally important. Words, and playing with words, and reading, have always been a huge part of me, so the writing is kind of deeply built in. I guess I like to write only when I feel I have something to say. But I play every day no matter what.

I like programs of opposition, sort of unlikely combos that often conflict with one another. And I’m getting more and more obsessed with the miracle of the Classical style. The way that comedy fits into the fabric of this music, the way it embraces human folly and emotion in one go, and shows that laughter and sublimity are not opposed.

Everything I’ve ever read of yours is so absolutely candid and revealing. When I read “Flight of the Concord,” your essay in The New Yorker about the realities of the recording process, it was almost shocking to me to find such a degree of openness about issues that musicians generally guard with fierce privacy, and about which we feel so vulnerable.

I don’t know, I always think I put a high price on vulnerability in piano playing — I don’t think I need the writing to encourage me to do that. The thing is that playing the piano is not a personal confession. It can intercept with personal confessions around whatever you are dealing with in the moment, but it’s also a universal confession. Whereas a personal essay is about saying “this is my story” and hopefully it also has a universal connection or at least connections with people who do a lot of creative work. The writing is about digging into the gesture of the piece and telling the story as vividly as you know how.

You’re bringing to Mondavi Center a new sonata by jazz pianist/composer Brad Mehldau. Tell me about the piece, and its origins.

I’ve always known Brad’s work, and I was always intrigued by his sense of harmony, and I was curious to see what he would come up with. We were having a conversation about Brahms one night after a gig of his. I remember that he played this wonderful improvisation and we talked about late Brahms intermezzos, and that sort of led to his writing this piece for me. It has a little bit to do with the Brahms D Minor violin sonata, sort of a long meditation on a pedal, like the Brahms. It has a little bit of an element of chaconne to it, and a little bit of pure jazz, and some Mahlerian sadness and farewell.

It’s an interesting program: the Mehldau Sonata, and Schumann's Carnaval, and the Mozart A Minor Rondo. You’ve called Carnaval a piece that is “bursting with young confidence — no regrets, no second thoughts.” And the Mozart Rondo — there you have all the regrets in the world; it’s one of his most exquisitely melancholy works. What goes into putting together one of your programs?

I like programs of opposition, sort of unlikely combos that often conflict with one another. Like when I did the Beethoven “Hammerklavier” and the Ives Concord Sonata — two pieces that are incredibly divided within themselves, sort of grappling with each other. Like Godzilla or King Kong or something. So here the contrasts around the Schumann seemed to me really interesting. And the Mozart: I’m getting more and more obsessed with Haydn, Mozart, and Beethoven — the miracle of the Classical style. How everything possible can be said in it — the way that comedy fits into the fabric of this music, the way the style kind of embraces human folly and emotion in one go, and shows that laughter and sublimity are not opposed.

The On The Bench Questionnaire

What’s the first thing you do when you sit down to practice?

I tell myself to ignore my phone and stop thinking of anything else but the patience of musical work, which is so similar to breathing. I then try to conjure [Artur] Schnabel or some other similar cigar- or cigarette-smoking pianist of yore, wearing a nice vest and drinking a demitasse of coffee, playing over a few chords until the voicing is just right. I remind myself to sit up, and check my shoulders for tension, and off I go. But most mornings I don’t remember to do any of this.

What’s the last thing you do before you go onstage?

I try to remember some lovely musical moment, a phrase that was played just right, or a moment where someone expressed the joy of music-making to me — and then I try to make sure I know how to get on stage without tripping over anything or anyone.

If you could travel in time to hear one piano recital, which would it be?

If you didn’t play the piano, what would you do?

I have no idea. I think that’s sort of a prerequisite for being a pianist!