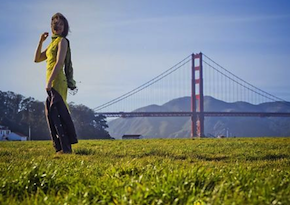 It may not have been an FAA-approved flight plan, but there were early indicators in composer Lisa Bielawa’s life that may have suggested she’d end up later this month at Crissy Field, an abandoned U.S. Army airfield, deploying 800 musicians.

“When I was a kid, I organized my stuffed animals and chess pieces in complex symmetrical, or complexly asymmetrical patterns, all over my room,” confides the 45-year-old San Francisco native, in a recent interview outside the Arlequin Café in Hayes Valley. She’d spent the morning at Presidio Middle School explaining to members of the school’s Panther Band the patterns she’s established for the three performances of her Crissy Broadcast on Saturday, Oct. 26 at 10 a.m. and 4 p.m., and Sunday, Oct. 27 at noon.

The Presidio kids form one of 15 groups involved in the project, the second in a series of what Bielawa terms Airfield Broadcasts. Tempelhof Broadcast, the first iteration, took place last May at a former airfield in Berlin which, like Crissy, had been converted to public parkland.

Guided by 13 professionals from the San Francisco Contemporary Music Players and two from the Tempelhof project (brought here by the German consulate), the groups will assemble in the center of Crissy Field to commence Bielawa’s score, which is a combination of musical notations, timed series of interactions, and marching orders. After the opening passages, the groups will disperse in different directions over the space of an hour, ultimately arranging themselves around the perimeter of the Field, before egressing.

Even while she was deploying her teddy bears in childhood, Bielawa learned piano, voice, and violin as the daughter of composer Herb Bielawa, a beloved professor and developer of the electronic and computer music studios at San Francisco State. She refined her vocal studies in the San Francisco Girls Chorus, with whom she traveled to Berlin, her first time overseas.

“When I was a kid, I organized my stuffed animals and chess pieces in complex symmetrical, or complexly asymmetrical patterns, all over my room.” - composer Lisa Bielawa

Bielawa now tours globally with John Zorn, and earlier this month sang in the L.A. Opera’s production of Einstein On the Beach, by her long- time collaborator, Philip Glass. And she’s initiated her first full season as artistic director of the Girls Chorus, who sang in the Tempelhof event and will appear at Crissy, along with the voices of the Chamber Chorus of the University of California. They’ll be intoning non-lexical vocables, since “you can’t hear text out there.”

Aside from the Presidio Panthers and the group leaders, the other participating instrumental ensembles are drawn primarily from public and private schools, including Aptos Middle School, Berkeley High, Lowell High, the Ruth Asawa School of the Arts (SOTA), Sacred Heart Cathedral Preparatory, and the Golden Gate Philharmonic, as well as the San Francisco Symphony Community of Music Makers. A significant difference between Crissy and Tempelhof, aside from the 550 more musicians, is the Great Wall Youth Orchestra, a Chinese ensemble from Laney College. “I’m supporting them,” assures Bielawa about the relatively low sound level of the Chinese ensemble. “There are sections [of the composition] where they’ll be right alongside the SOTA electric guitars.” The guitars will have battery packs and small portable speakers, but aside from that, “there’s no electricity, it’s completely green, it has no footprint.” 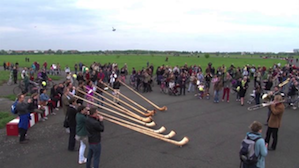 In another change from Tempelhof, on a last-minute recommendation from Philip Glass, Bielawa has replaced the elongated alpenhorns of Germany with a Tibetan longhorn (dungchen), wielded by San Francisco-based spiritualist and musician Karma Moffett. Attending Moffett’s accompaniment of a labyrinth walk at Grace Cathedral, the composer was impressed that the longhorn is based in the key of A, the same pitch as the dominant foghorn on the Golden Gate Bridge, which caught Bielawa’s ear when she was doing a home exchange in the Marina and jogging around Crissy Field. “It was a foggy day, with the maximum number of horns I’ve ever heard,” she recalls. Returning to her keyboard, “I tweaked them, and it was basically an open-voiced A-minor triad, with an F-sharp below and kind of a moving bass.”

This sonority stayed with Bielawa, once she’d settled on Crissy as a performance site and had begun composing for it. “At exactly six minutes into the piece, I put a ‘Trombone Chorus’, though it has more than trombones playing in it [and might include the Tibetan horn]. It uses the [foghorn] notes in a slow, stately sort of chordal thing.” She kind of hopes that the weather might invite the real foghorns to join in.

“It took a very, very long time to develop material that is plastic enough to be used in various ways over space." - Lisa Bielawa

In order to function as a site-specific composer, Bielawa also found it necessary to reflect on “the complexity of my musical language”, noting that “a lot of harmonic nuance and dissonance would be completely wasted out on a field,” while “thirds are great out there.”

Ultimately, “It took a very, very long time to develop material that is plastic enough to be used in various ways over space, and that can be mapped to different levels of players and different instrumentations. I had to come up with what one could call a ‘library’ of harmonic and combinable logics.” 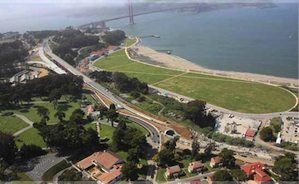 There are specific points in the score beyond the Trombone Chorus to be cued by the time-keeping leaders, but “I want it to be dynamic and changing,” insists Bielawa. Moving over the field, with the eight huge outdoor sculptures of Mark di Suvero acting as guideposts, the ensembles will continue to interact, even when they’re “at the absolute limit of audibility away from each other.”

And, “the responsibility between the groups will keep shifting: Who’s giving the cues, who’s taking them, who’s supporting whom, which groups have expansive melodies, and which have beds of harmony.”

In the weeks preceding Crissy Broadcast, Bielawa visited each of the participating schools, accompanied by a member of the Contemporary Music Players assigned as soloist and leader of each ensemble. “He [or she] is the one determining the pacing,” explains Bielawa. “And he gets to decide whether to play phrase one, two, or three,” which in turn will elicit a particular response from one or another of the other ensembles. But, “if you miss an entrance, it’s cool, because something else will happen soon that you’re supposed to respond to. It’s not very dangerous.”

Kellen Liao, a senior and a bassist at San Francisco’s Lowell High School, was recruited for the project by his orchestra director, Michelle Winter, who advised her students to watch YouTube videos of the Tempelhof Broadcast. “It sounded absolutely amazing,” reports Liao. “It’s not your typical piece, where everything falls into place, and there’s actually quite a bit of dissonance going on. But what interests me is how you can make those levels of dissonance work together, to produce something that might sound harmonic at the beginning, then get dissonant, and then resolve itself at the end. The individuals in my section can play at different tempos, as long as we follow the number of seconds for each phrase. It’s sort of a weird mix of ‘do what you want, but only for this amount of time.’”

“You’re in charge of what you want to hear. What kinds of sounds are attractive to you? I want this to be fun and joyful." - Lisa Bielawa

Although “modern music can sometimes involve a rubber ducky, my stand partner and I agree that this is definitely a new thing, and pretty cool,” opines SOTA violinist Lisa Ouyang, who’ll be participating with her school’s orchestra. “And this project helps us connect with people outside our campus.”

Collaborating with the kids and with adult professionals and amateurs is very much in keeping with Bielawa's abiding goal of "encouraging people to work together as a broader arts community." This extends also to the audience, both those who come to Crissy specifically for the performance and those who happen to be strolling, skateboarding, or cycling by. “You’re in charge of what you want to hear,” the composer advises. “What kinds of sounds are attractive to you? I want this to be fun and joyful."

"I know that probably what’s gonna happen is, people will gather around,” at the start of the Broadcast. “But the fun part is, when the groups split off and go in different directions, then what? Are you gonna follow the cute clarinetist? It’s good to move, because what you’re doing is creating your own personal mix.” Between the morning and afternoon performances on October 26, audience members and musicians are invited to join Bielawa and panelists in free discussions about the genesis of the Broadcasts and how orchestras can best engage the public, at the Chapel at nearby Fort Mason. More details can be had at airfieldbroadcasts.org.

“I’m interested in learning from people, whether they’re eleven or 65, what music means to them,” declares Bielawa. “I personally need this experience, and my gut tells me there are others who could really have a joyful and possibly transformative experience in this way. And that inspires me to provide it.”