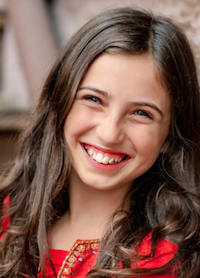 Her name really is Dakota Dry. Such a perfect name for a young actress and singer. And a name that demands an answer: Who are you? ... if not a heroine in a Louis L’Amour novel, the only girl gunslinger in High Lonesome, but with a heart of gold and red-river wit.

We reached Ms. Dry the other night. She was just out of rehearsal for a Berkeley Playhouse production of Mary Poppins, directed and choreographed by Kimberly Dooley. Taylor Jones will play the lead. Previews begin in Oct. 30 at the Julia Morgan Theater. Dakota plays Jane Banks, one of two unruly British children who go through nannies like popsicles and are finally tamed by the magical Mary.

We asked how the rehearsal went. “It went really well,” Dakota said, explaining that she and the other child actors had to sing their solos. The child roles are double-cast. “We were prepared, it went quickly and we did it well.”

Dakota Dry is 11. She’s in seventh grade at Oakland School for the Arts. She prefers math to other subjects. We asked about Jane’s character. “I like her because she’s a little bit bratty, because her father doesn’t give her a lot of attention. She’s opposed to nannies completely but she also has a likeable side and a reason for being that way.”

Is it difficult to play the part?

“In some ways she’s very, like, mean and cruel, but she needs to be a likeable character as well so … being cruel but with enough reasoning that she can be likeable. I think that’s difficult.”

Dakota added that the part calls for her to speak with an English accent. “When I was little, I would always watch the movie, Mary Poppins, and that’s where I learned my British accent, and now that I can do my British accent in this show it’s going to be really fun.”

She says the most difficult part of the play is remembering not only her lines but also the lines of all the other characters. “I don’t want to just space out, because I don’t have a lot of lines and so I have to wait through long sections before I actually say lines.”

The character she would most like to play when she gets older is Tracy Turnblad in Hairspray. “Right now I’m too young, except in a kid’s version.”

She saw the show when she was five or six and has seen it over and over ever since. “I really like her personality, like in the first song in the movie she opens up with “Good Morning, Baltimore” and she just has, like, this really cool like energy — in my perspective she’s on top of the world …. She’s riding on top of this garbage truck singing and putting her hands in the air — I like that aspect of her….”

Inevitably, you have to ask Dakota Dry if she wants to make this a career. She was not quick to answer.

“I’ve always wanted to be a teacher, but I really like acting, but I don’t think I would make it my career. I don’t know. Maybe an acting teacher; that would be fun. I’ve always loved to teach people.”

This last summer, Dakota and her parents went on a concert tour of sorts, though the land of open mics in venues like The Wilde Thistle in Los Angeles, The Sky Bar in Tucson, La Taza Coffee House in San Antonio, and Tiny’s in Santa Fe. Her father, Richard, is a singer, teacher, and novelist. This last April he and Dakota won the San Francisco West Coast Songwriters Competition award for best performance.

“I really loved it,” said Dakota, remembering the trip. “It was just fun to play at different places … We were driving in our van; we had our two dogs with us, too. It was really fun because we were all together as a family traveling to all these cool places.”

At the end of the interview we wanted to clarify the spelling of her name. “That’s right,” she said, ‘Dry, like not wet.”

You can hear Dakota (who is also a songwriter) and her father singing at richardanddakotadry.com.