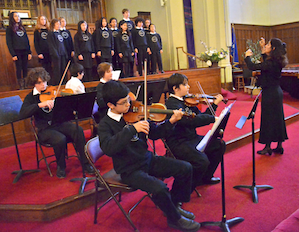 The Junior Bach Festival that everyone always remembers is when the lights went out a few years ago during a solo concert at the Unitarian Universalist Church in Kensington. It was, shall we say, a ‘dark and stormy night’, filled with thunder and lightning, and the virtuosity of violinist Yujin Ariza, who was then 14.

Just then he was in the middle of a hot streak, in which he won several prominent competitions that lead right to Julliard’s door. Which is where he is now, among other places. He was last seen in the Bay Area in June during a concert with the El Camino Youth Symphony.

But it was that Saturday night in Kensington that said it all — about Ariza, but also about the festival itself and the intensity that underlies it. Ariza was playing Bach’s Partita in D Minor for solo violin, known for its virtuosic Chaconne movement, about which Brahms noted, “If I imagined that I could have created, even conceived the piece, I am quite certain that the excess of excitement and earth-shattering experience would have driven me out of my mind.”

So here is Ariza playing a very difficult piece, and perhaps in the moment just a little out of his own mind, when suddenly a flash of lightening and a world-ending crash of thunder explodes. The lights flicker and then complete darkness but Ariza, just at the halfway mark in the piece, doesn’t miss a note and plows on for seven more minutes — unexpectedly exquisite minutes as anyone will tell you who was there.

“We always encourage students to try again, and certainly one feature of the audition process is that the judges offer feedback.” - Lisa Grodin, music director, Junior Bach Festival

Such is the nature of the Junior Bach Festival, which got its start in 1950 and opened officially in 1953. In addition to the festival, the Junior Bach Association sponsors annual workshops for students and teachers, focusing on topics such as baroque style, proper ornamentation, and the relation of dance to Bach’s music. Alumni include the likes of violinist Ben Simon, now director of the San Francisco Chamber Orchestra and Jon Nakamatsu, gold medalist in the 1997 Van Cliburn Competition.

It is one of the premier festival/competitions (for musicians between four and 21) and this year starts on Friday, March 21 at the Crowden Music Center in Berkeley. It is the first of nine concerts that continue, every few days, through Sunday, March 30. In sum, there will be 116 performances involving 200 musicians.

The youngest is five. That would be pianist Reina Kimura who will be playing a Prelude in C Minor. The piece lasts 85 seconds, but of course, in the realm of adorability, a lifetime. And if you’re wondering about pedal extensions, no need; Bach didn’t use them.

“She’s not a prodigy,” the festival’s music director, Lisa Grodin, told us earlier this week. “But she has this incredible musical aptitude and emotional power. Clearly, she has been taught very carefully and has done a lot of work on her own. I was very taken.”

Grodin, who teaches and conducts at the Crowden School, has played with such ensembles as Philharmonia Baroque Orchestra, El Mundo (nominated for a Grammy for “Best Small Ensemble” in 2011), Voices of Music, American Bach Soloists, Santa Fe Pro Musica, and Smithsonian Chamber Players

For the Junior Bach Festival this year, there were 293 auditions involving more than 400 musicians. That’s up from an average of 220 auditions in years past, and the result of a good deal of outreach. About 20 ensembles were in the running, including some groups facilitated by Junior Bach.

All the auditions were blind; judges sat behind screens for two eight-hour days in early February, at $50 an hour. The judges themselves were mostly Bay Area music teachers, specializing in all the usual categories: violin, piano, cello, guitar, woodwinds, percussion (even marimba!), organ, guitar, and of course, voice. Each audition lasted less than 15 minutes.

“After the audition,” says Ms. Grodin, “each person, or ensemble, is given a grade. An “A” lets you go on. Sometimes, but it happens, a B will suffice. We always encourage students to try again, and certainly one feature of the audition process is that the judges offer feedback.”

In the old days, local radio stations carried the Junior Bach concerts, but the festival still draws large audiences, including many who simply come to hear great music. “This is not ‘baby music’,” Grodin points out. “The musicians may be young, but it’s still Bach and played at a very high level. And this is one of the reasons so many people come to these concerts, not just parents and friends. I’ve always felt that the more you appreciate Bach the more you realize that listening to his music is like watching a master painter at work. It really is a form of word painting.”

Spence Larsen is president of the Junior Bach Festival Association. He’s also a doctor, and for 32 years worked as a pediatrician. “This is a sampling of some of the best young musicians in the area and for that reason alone these concerts are very inspiring. But it’s also inspiring to see real competency, even mastery. It gives you faith in the future.” For more information: www.juniorbach.org.