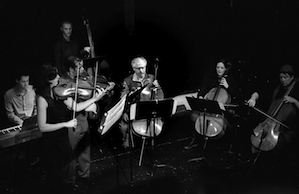 Classical Revolution, "chamber music for everyone," which started in San Francisco's Revolution Cafe in 2006, has spread far and wide. There are now more than 30 chapters worldwide, and locally, musicians have performed in more than 800 music events in nearly 100 Bay Area venues.

An active CR chapter is in Portland, OR, Classical Revolution PDX, using the city's airport code.

Classical Voice's Jeff Kaliss spent the holidays in Portland and he went to "work" on Dec. 26, known as Boxing Day in the UK and Commonwealth countries, but Bachxing Day in the Oregon city, celebrated with a concert in the Someday Lounge in the city’s Old Town district: 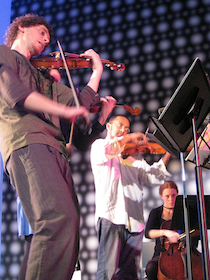 Portland violist Mattie Kaiser, who founded a Classical Revolution chapter here some five years ago, served as the evening’s MC. She prompted the good-humored audience’s reflection on CR PDX’s year of expansion to some 300 members, (including professional and semi-pro musicians), its schedule of performances in informal, affordable venues, alternatives to pricey concert settings, and its acquisition of nonprofit status.

The member musicians, variously and mostly informally garbed, delivered a potpourri of delights from Bach’s extensive oeuvre. Their performances on a variety of instruments were earnest and well-received, even when not entirely true to score and pitch. The feeling of fun was bolstered by a costumed skit, "And Here’s Groucho!," in which the legendary comedian and TV host engaged Johann Sebastian in dialogue about his compositional and procreational output, with credit due Anna Magdalena.

Recordings of Bach were awarded in a Best Bach Pun competition and a session of bingo, with numbers matching various of the composer’s 15 two-part inventions, performed on a Yamaha keyboard by Christopher Corbell. Kaiser, who has guested with the Manchester, England and San Francisco chapters of Classical Revolution, proudly announced that her city’s Bachxing Day tradition has, for the first time this year, been adopted by the Chicago chapter, and that Portland will be hosting the next International Directors of Classical Revolution Conference, in June of 2013.