Cecilia Bartoli's virtuosity in the service of a great and yet virtually unknown composer, Agostino Steffani, is featured on National Public Radio's free online program, "First Listen." It's yours for the clicking, even now, a week before its commercial release.

"First Listen" streams — of entire CDs, not just samples — available this week include:

Mission is a revelation. The music by Steffani (1654–1728) is passionate, abandoned, rhythmically exciting — reminiscent of Purcell, Vivaldi, and Rameau. Bartoli's fabulous performance will create new fans for Steffani, and it's high time. 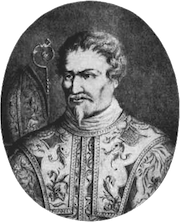 From the NPR note on his life, Steffani:

... wrote reams of well-built vocal music a generation before J.S. Bach and led an extraordinary life. When Steffani wasn't composing some 15 operas and 75 chamber duets, he accepted missions throughout Europe as a priest, diplomat, and political operative. He rubbed elbows with German royalty, the Austrian emperor and the Pope. His life, according to Bartoli, was shrouded in mystery and conspiracy.

All of which is great fodder for Bartoli's record company, Decca, which must be having a blast promoting the album. Photos feature a bald Bartoli as a Steffani stand-in whispering secrets to heads of church and state. The label had a secret of its own: Months before the album's Oct. 2 release, the company imposed a gag rule on naming the composer of Mission. In a nod to Steffani's James Bond-ish life (he was indeed tangentially connected to a murder he didn't commit), the company launched a kind of Internet scavenger hunt via video webisodes, each of which would reveal a secret word.

So, with all the intrigue and promotional bluster, what does Steffani's music actually sound like? It's wonderful and remarkably wide-ranging. Bartoli thinks of Steffani as an important missing link between Monteverdi and high Baroque composers like Vivaldi and Handel. She has a knack for ferreting out unsung composers and making their music shine, and this Steffani disc is right in line with her illuminating recordings of music by Porpora, Graun, Caldara, and Salieri. Out of the 25 selections on Mission, 20 are appearing on CD for the first time.