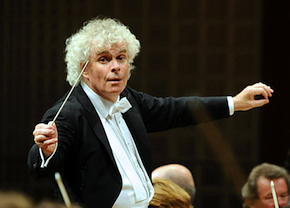 When the Berlin Philharmonic's season opens at 10 a.m. Pacific Time on Aug. 23, you can watch it in San Francisco live and free. All it requires is free registration. Once that's done, you can log in at the beginning of the concert and "be there," with the orchestra's superb Digital Concert Hall.

Simon Rattle will open the season with Mozart's last three symphonies — No. 39 in E-flat Major, No. 40 in G Minor, and No. 41 in C Major (Jupiter) — great masterpieces regarded by some as one coherent work. From the Philharmonic's program notes for the event:

"Representing no occasion, no immediate purpose, but an appeal to eternity" is how his biographer Alfred Einstein characterized the creation of Mozart’s last three symphonies, which will open the Berliner Philharmoniker’s new season under the baton of Sir Simon Rattle. The transfiguring image of the immortal Mozart, "darling of the gods," who wanted to erect a symphonic monument for himself and the history of music, has stubbornly persisted.

Probably he composed them for the three "academies in the casino" he mentioned in a letter to his friend and lodge brother Michael Puchberg. What is certain is that he created three of the crowning masterpieces of classical symphonic writing, works that differ from one another in every aspect, even instrumentation. It is as though Mozart wanted to display the entire spectrum of the artistic means at his disposal. The E-flat Symphony, K. 543, in the words of E. T. A. Hoffmann, leads "into the depths of the spirit realm" — its astonishing radiance and its high spirits notwithstanding, touching on the dark and demonic sphere as well.

The beloved G-Minor Symphony K. 550, by comparison, is a locus classicus of architectonic balance, its Andante acting as a lyrical island between the dramatically charged minor-key movements. And the mastery of form and compositional technique exhibited by the "Jupiter" Symphony K. 551 suggests the quintessence of every apparent possibility for instrumental music during Mozart’s lifetime.