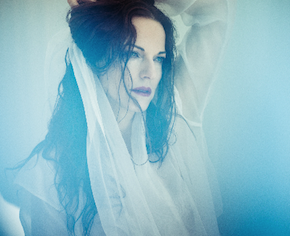 When I first saw (rather than heard) cellist Maya Beiser perform, a dozen years ago at the Oregon Bach Festival, I was struck by her flaming red hair and dramatic/melodramatic stage presence. But unlike some "externalist" artists, Beiser is also a fabulous instrumentalist; music gains priority over everything else, resulting in performances of dedication and passion.

She just appeared with the Santa Rosa Symphony, performing in Osvaldo Golijov’s Mariel and Bruch’s Kol Nidrei, and now Beiser is heading to Stanford's Bing Concert Hall, where on Dec. 7 and 8, she will participate in the world premiere of Linked Verse, an evening-length work by Stanford composer Jaroslaw Kapuscinski, produced by the New York-based digital media collective OpenEndedGroup.

The multimedia concerto, commissioned by Stanford Live, will bring together sho (Japanese bamboo mouth organ) master Ko Ishikawa and Beiser in what is described "a visually immersive performance environment featuring live 3D stereoscopic video. The soloists will exchange musical passages while sounds and images recorded in Japan and the U.S. undergo an evolving, interlinked transformation." The audience will be provided with 3-D glasses to wear. 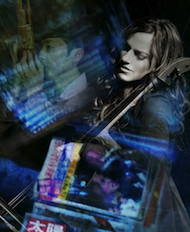 Multi-everything is a hallmark of Beiser, born in Galilee, Israel, surrounded with the music and rituals of Jews, Muslims, and Christians. She is a graduate of Yale University and a founding member of the Bang on a Can All-Stars. In addition to performance of classics with major symphony orchestras, she has collaborated with artists across a wide range of musical styles, including Brian Eno, Philip Glass, Steve Reich, Tan Dun, James Newton Howard, and Carter Burwell, among many others.

In 2011, Beiser gave a TEDtalk, watched by over half a million people and translated to 32 languages on the TED website. She was also invited to perform in NPR's Tiny Desk Concert Series this summer.

Last month, a new art film featuring Beiser performing music for solo cello by David Lang, created by artists Allora and Calzadilla, screened in Paris at the Muséum National d’Histoire Naturelle. The film deals with the Venus of Lespugue, an ancient nude female figure from the Upper Paleolithic period, and explores the speculative theory that the exaggerated proportions of the female form embodied by the Venus can be represented musically.

Among her other film work, Beiser was the cello soloist this summer on the soundtrack by James Newton Howard for M. Night Shyamalan’s science fiction film After Earth, starring Jaden and Will Smith. Her discography includes five solo albums and numerous studio recordings and film music collaborations.