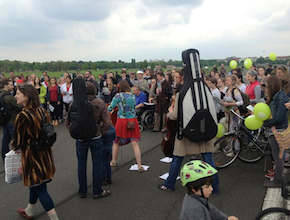 The scene this last weekend in downtown Berlin at the old Tempelhof airfield was as wild and chaotic, and as musically joyous as one could imagine — and as Lisa Bielawa had hoped.

Bielawa is a composer, singer, choral director, and, under still other fedoras, a Christo-like impresario, who alights here and there around the world to experiment with music in public spaces. Last weekend, she drew 230 musicians from all over Germany to play out an idea for a series of three 60-minute concerts on the grass and runways of this former US Air Force base, now a 900-acre park, a few minutes from “Checkpoint Charlie.”

The music used in the event was based on Bielawa’s Tempelhof Etude, a 20-minute piece she wrote and then, as she put it, “learned from, messed with, and expanded into a one hour concert piece.” The piece was designed to articulate sound over long distances and so includes “utterances and silences.”

The performance began with all the musicians gathered at a central point on the field and then slowly dispersing, in a big bang effect. By the end of the concert, the mass had divided into two groups about a kilometer apart. The choreography is complex and closely tied to wind. “It gets very geeky,” said Bielawa.

We caught up with her as she was on her way from Berlin to Moers, which is outside Düsseldorf and where she’s singing the music of John Zorn at the Moers Festival.

“I’m all blissed out,” she said. “Just stunned. I think everyone felt an enormous amount of just magical energy. And then on Sunday it rained but people stayed with it. A group of drummers put away their drums and picked up garbage cans. Another group put away their string instruments and just sang. It was miraculous. I can’t tell you the feeling.“ 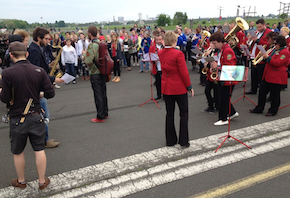 The project, “Tempelhof Broadcast,” took three years to develop and is one part of a larger undertaking called “Airfield Broadcasts.” The next performance will be on Crissy Field in San Francisco in October, where some 600 to 700 local musicians will perform.

“The funding was unbelievably difficult,” she said, “and in the end, I had to borrow money ‘from the future.’ I can only think of it an investment in what I believe in.”

She added that bringing so many people together without any real rehearsal and often no clear understanding of what the event entailed was a measure of the imagination and courage of the participants.

There were community bands, including one from the former East Germany, a young jazz orchestra from Saxony, and string ensembles. Instruments included 10 alpenhorns, those impossibly long, Seuss-like musical creatures.

From Abbey to Airport

Tempelhof airfield was developed into a commercial airport in 1923, on ground originally owned by the Knights Templar. In the 13th century, the knights, having returned from various crusades, built an abbey surrounded by a moat and then encouraged more than a dozen young, homeless farmers and their families to farm the surrounding land. In that sense, the place has always been a refuge. And then, in 1948, during the Berlin airlift, the airport became the key conduit for supplies to save a besieged city.

“You can create ways to connect with people in the context of their daily life in a city. That was really my inquiry.” – Composer Lisa Bielawa Nevertheless, the place also has its darker ghosts, most notably during the 1930s when the Nazis occasionally used the place for public gatherings that drew tens of thousands of people.

We reached Gerhardt Müller-Goldboom, a participant in the event. He’s a composer and conductor, and the director of Work-in-Progress - Berlin, a professional ensemble that plays contemporary music. We asked what the Tempelhof Broadcast meant to him. 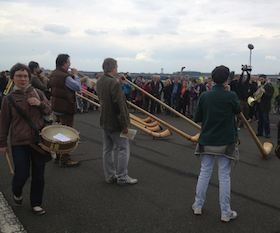 “Nowadays the airfield is a very special kind of a park, maybe singular, with its large open space immediately within the city giving biotops for larks and such birds. For a lot of people who cannot afford any trip to the countryside it is a kind of countryside in the city, where some realize gardening, barbecue, and a lot of sports, including kiting. So it is the happy place, which inspired Lisa for the project…

“A hundred years ago the airfield was used for troops exercising. Since Lisa, of course, used a lot of brass instruments and drums — these with the specific rolls — I was seduced to imagine the picture of drumming and blowing for a battle. We all know these movies with old battles starting [with] drum rolls and trumpets recorded directly in front of the player. Here one was able to imagine what it meant to listen to the sound of the enemy’s drum. On such a field, he is not so far away, when you may listen to him. So you are in an immediate dangerous situation … just to give an idea, what such distant sounds, in musical terms, may be associated with in your mind.”

And so Tempelhof airfield has become a place from which you take off, in one sense or another. Asked what she’d learned from the experience, Bielawa replied: “That it’s possible to create a kind of really joyful, inclusive experience that can exist in a public space. That you can create ways to connect with people in the context of their daily life in a city. That was really my inquiry.”