May 10 and 11: The Community Music Center Theater in S.F. presents the Little Opera Company’s productions of I’m in the Mirror and The Crystal Diamond Heart. The libretti for these two 30-minute original operas were written by 25 children, ages 6 to 10. 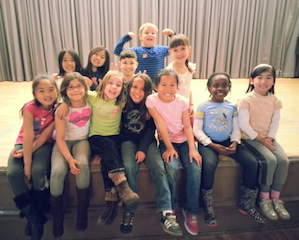 The little idea behind the Little Opera Company is that you gather up two dozen little kids and you put them with a handful of adult composers and musicians and see what happens. This is the company’s third year, and what happens is a remarkable attempt to let children be truly creative and take responsibility for their effort.

The big idea behind the Little Opera Company is to take this model, and the principles of creativity and collaboration, and address not just children, or seniors for that matter, but all kinds of groups, including corporations.

The Little Opera performance this weekend is the product of 25 children, in second through fifth grade (ages 6 to 10), who have been meeting twice a week, two hours each time, for almost nine months. Classes are led by accomplished young composers and musicians. The tuition is $950; however 85 percent of the students are on scholarship or receive tuition assistance.

The Little Opera, which puts on two performances a season, has been working with the San Francisco Unified School District at West Portal Elementary, which is where meetings are held, although that will change next year. The program is set to expand and will include children up to age 13. District teachers are encouraged to recommend those who have excelled in the arts or who have some particular artistic interest — regardless of income. Registration is open to all children regardless of where they go to school.

Out of the Imagination of Children

“Children always find the most melancholy [emotions], or the most heartwarming, but always the most dramatic,” says the company’s managing director, and music specialist, Claire Shaw. “And that’s why opera in the hands of children is so compelling.”

She adds that when children write an opera they feel they own it. “We're not training them to be choristers, we're helping them realize their compositions — an aria, a chorus, a duet. The singing is raw and from the heart. That said, over the past nine months we have incorporated vocal warm-ups, exercises, and master classes to help build their vocal tool box.”

She quotes one of the children, a third grader named Jaynee: “When I first sang the opening chorus I noticed that I was singing differently. I sounded strong, like a real opera singer. I just wanted to keep on singing and singing. When I was singing I felt confident and fearless.”

“And yes,” says Shaw, “some aren't quite hitting the notes, but the melodies are all theirs and they clearly love to sing them.”

The children are accompanied by piano, viola, and flute.

As for plot, the two performances this weekend suggest the magical realism that defines children’s theater in general, but also some of the personal themes and metaphors that occupy children’s minds these days.

The Crystal Diamond Heart, produced by the younger of two groups, is a fairy tale set in a crystal palace in Antarctica. A villain sets out to steal a crystal diamond but the ever-clever queen overhears the plot and spins her own plan to replace the real diamond with a fake. The villain steals the fake and discovers he’s been duped. Meanwhile, the princess assumes the stolen diamond is real, and while others believe the sky will collapse as a result, she offers an impassioned plea to rally around love and the nonmaterialistic values of the community. The villain hears the plea, and heart melting, he changes his ways. And once more all’s right with the world.

“I get really into it because sometimes ideas are coming to me so fast; they’re just flowing out of me.” — Gertrude Stookey, fifth grader

In I’m In the Mirror, the older group constructed a dark tale about a cursed family and a boy teased so much by his siblings that he loses all memory and decides on a bizarre bit of revenge. He traps the meanest sibling by luring her to a haunted mansion using the specter of ghostly smoke. The boy is assisted by an Igor-like character, a cook, with a split personality, at one moment the epitome of evil; the next of goodness.

We will not spoil the ending.

It was Gertrude Stookey who thought up the Igor character. “We call it ‘it’,” she told us, “because it has two personalities; it’s a really cool character.” Gertrude is 11, a fifth grader at the French American School in San Francisco. She also suggested the idea of a mansion, but someone else wanted a haunted house and so a compromise lead the group to decide on a haunted mansion.

“It’s fun to do all year,” she said about Little Opera. “It takes up time. You’re working on it a lot. I’m thinking about it a lot and coming up with ideas even when I’m not there. And also you meet new friends and you’re working with people who really know a lot about theater. I get really into it because sometimes ideas are coming to me so fast; they’re just flowing out of me. I also really love rehearsal and I love the acting, which is pretty much what it is.”

Gertrude got involved with Little Opera by accident. “This wasn’t our idea at all,” explains Gertrude’s father, Nathaniel Stookey, best known for his collaboration with children's book author Lemony Snicket on the work The Composer Is Dead. “It’s quite different from the violin and piano lessons she has. And also singing lessons. It’s a unique way to express herself and has become her favorite thing.”

Danny Clay, 24, is one of the composers working with the Little Opera. He helped put music to words. “The kids compose the mood and I respond,” as he puts it.

“The good side of the cook is dreaming of baking ginger pop tarts; then the evil side says, ‘I hate pop tarts.’ The music for the good side has a Mozart-like lightness followed by a big, nasty chord change. And so what the kids learn is how music can reflect duality and the result is something genuinely dramatic — and hilarious.”

Clay graduated last year from the San Francisco Conservatory of Music with an M.A. in composition. He writes chamber, electronic, and theatrical music, and teaches music at Zion Lutheran School in the Inner Richmond District of San Francisco. He also curates music written, or expressed, by children.

Asked about encouraging the creative process among children in elementary school he pointed out that kids these days often come to the table with a sense of a right or a wrong answer. “It’s been a learning experience for me to show them that creativity is not just a matter of freedom, it’s also about being able to check yourself, to edit yourself, because within that freedom to create is responsibility. And so, of course, anyone could create a silly opera but it’s better to make it the best it can be.”

But when do you know you’ve reach that point where you think something is the best it can be?

“I think older kids — third, fourth and fifth graders — have an internal sensibility that tells them when something is finished. But you have to remember that kids are looking for something that is immediately satisfying, and from that they derive a sense of accomplishment.

“That’s the difference from being an adult. For me, being an artist on a professional level, it’s unfortunately not just about making something personally satisfying, but also about making something appealing to an audience, because in the end you realize you’re going to be judged by those people. That hasn’t clicked for the children; they’re just doing what makes them feel good. They’re not worried about being judged.”

Erin Bregman founded The Little Opera in 2011 and is also artistic director. She had been a teaching artist with the San Francisco Opera and, while working in one of their school programs, became caught by the idea of creating a children’s theater company, “where everything would be made by kids.” That in turn led to the idea of opera, because “kid’s lives are so operatic themselves.”

“Collaboration is a dance. You’re listening to someone else’s idea, balancing it with your own, and always with a sense of what the goal is. It’s an art.” — Erin Bregman

The company gets funding through individual donors, but recently received a small grant from the Awesome Foundation. In addition, the company is about to launch a series of fund-raising events in private homes where people gather and in one day prepare a short opera, which is performed at the end of an evening in a roomful of friends.

“We tested the idea last year,” says Bregman, “and it went over really well.”

Bregman, 30, and a playwright herself, is also looking at other applications. One is to offer songwriting and opera creation as a team-building exercise in corporations. A pilot program begins this summer.

“So for example we could go to Apple and say, ‘ok, what are you about? Let’s write a song about it,’” she says.

Bregman strategy would be to address the whole notion of collaboration, “which can be a very messy process”: what it means and how it works — clearly from an artist’s perspective. The process would engage people in the basics of lyrics, composition, and working with a composer. “Collaboration is a dance. You’re listening to someone else’s idea, balancing it with your own, and always with a sense of what the goal is. It’s an art.”

In that sense, of course, collaboration implies an obligation, or better, a responsibility to the success of a project. And to a community. That’s a principle Bregman and her colleagues believe in strongly: “Giving these children responsibility for what they want to do is a huge focus of ours.”