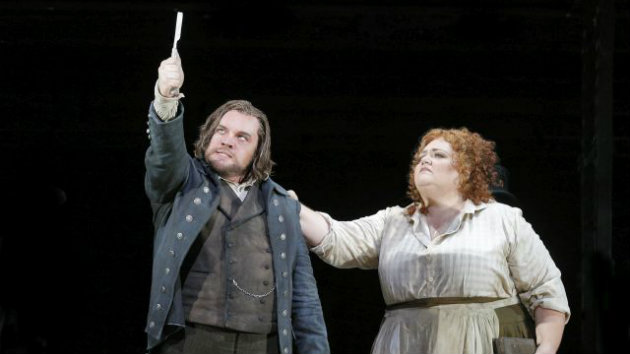 Six years ago, Stephanie Blythe made her first main-stage appearance with San Francisco Opera as Azucena, the Spanish name for "white lily," but in Verdi's Il trovatore, the tragic and heinous anti-heroine, whose bloody revenge culminates in the deaths of the tenor and soprano ("nothing personal," Blythe might say).

She is now back for the first time since 2009, singing another monstrous character. It's Mrs. Lovett, the butcher and chef of human remains, serving up "the best pies in London," in Stephen Sondheim's Sweeney Todd. Again her character is motivated by revenge, although it's the title character's revenge, not hers.

Asked for her favorite line in a hilariously loathsome duet about her dishes, Blythe thinks for a while, running the text through her mind, and finally settling on:

...we have some shepherd's pie peppered
With actual shepherd
On top

Allowing me to continue:

Here's a politician - so oily
It's served with a doily...

Azucena has terrible grievances motivating her, but what of Mrs. Lovett, so different from the revengeful Gypsy, tripping along gaily by the sea:

... all that fresh aquatic air's bound
to be good for the lad's poxy lungs...
By the sea, Mr. Todd,
That's the life I covet

Blythe knows Mrs. Lovett's reason: "She is in love with Sweeney Todd." And so the mezzo revels in the Sondheim work's complexity, musical riches, and multi-layered lyrics. 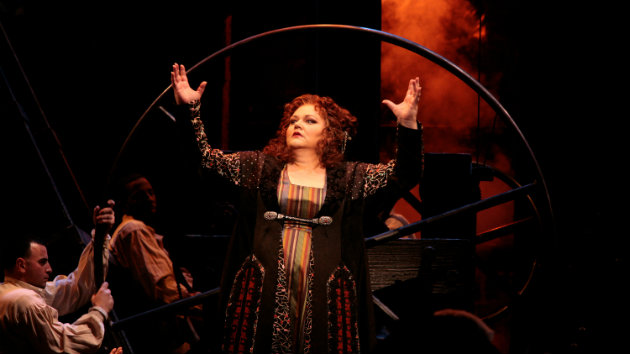 But when it comes to San Francisco Opera's assistance to the audience with the intricate lyrics by providing Supertitles, Blythe comes down decisively among opponents to the device first introduced by Lotfi Mansouri, former S.F. Opera General Director, when he was still heading the Canadian Opera Company in 1983. Although Supertitles (or surtitles) have spread all around the world, the passionate debate about them never stopped in three decades. Certainly not for Blythe:

It's a hot-button issue with me. I do not believe in them, full stop. I believe with all my heart that what Supertitles have done is to train audiences not to listen.

They don't listen the same way - they hear it but they don't listen. I am not here to ruffle feathers about Supertitles, but I am an artist first, I serve the music, the audience, and what I see is that Supertitles have not only changed the way audiences listen, but changed the way singers prepare. It has made it a completely different experience.

Last night, for example [at the dress rehearsal, attended by school audiences], there were several times in the dialog [which is included in the titles] when I had a word slip and I put in something else, I got the gist of the line, and my first thought was, Oh crap, that's not what they are getting in the titles! It shouldn't be that way.

I work overtime in everything I do to be sure, especially in my own language, so that everyone understands me, so they don't have to look. Imagine, put yourself in the body of a singer, who is looking into an audience, and all you see is this: chins up.

Born in New York, Blythe came through the Metropolitan Opera's training program, won the Met's National Council Auditions, sang major roles there and elsewhere, and in 2009, she won Musical America's Vocalist of the Year title. Reporting on the award, Martin Bernheimer wrote:

Stephanie Blythe is a singer of extraordinary versatility, an artist who makes the most difficult challenges seem easy, a singing-actress who magnetizes attention and defines character without resorting to cliché.

Her tone is big, warm, lush, well-balanced throughout an exceptional range. She savors a whispered pianissimo as much as a rousing fortissimo, and, even better, knows how to bridge the extremes. She is smart and sensitive, also earthy.

These are attributes which are needed - and provided in full - as Blythe sings the female lead of Sweeney Todd, exhibiting dramatic tour de force repeatedly, such as when she is convincingly warm and reassuring, leading her innocent young apprentice to his death:

Demons'll charm you
With a smile
For a while,
But in time
Nothing's gonna harm you,
Not while I'm around.