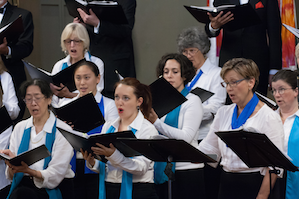 As I write this, Brahms' music streams through my head. There is nothing (in my humble opinion) as wonderful to sing or to listen to as Brahms' glorious German Requiem. We will be performing the version of the piece which Brahms set for 4-hands piano. This unusual version highlights the clarity, precision and power of Brahms' masterful composition and brings an immediacy and intimacy to the vocal exposition of the various texts that Brahms chose for the seven movements. And each of the individual sections of the Requiem is full of wonderful counterpoint, glorious melodies and grand fugal passages.

After a couple of months of rehearsal, we are finding that the experience of preparing this concert is very different for those of us who have sung it several times. Many local German Requiem performances are with orchestra, very large, usually pickup, choruses and only two or three rehearsals.

It makes a big difference to have time to work on each movement and to be able to try different dynamics and interpretations. Subtle changes makes the work just come alive. It also helps that we're singing everything at concert tempo.

Brahms wrote the piano score for two pianists both playing on the same piano, with each playing from their own score. Our pianists are Tim Getz and Tysen Dauer. Tim is Bay Choral Guild's regular accompanist and concert pianist. He is also an accomplished organist and is currently the Director of Music Ministry at Grace Lutheran Church in Palo Alto. Tysen performs regularly in the Bay Area as pianist and organist. He is also a musicologist, currently pursuing his Ph.D. in musicology at Stanford University.

One of our basses sent me a comment about rehearsing the Requiem: "With the beginning of each movement, I’ve said 'That’s my favorite.' Until we start the next movement, 'No, THIS is my favorite', and the third, 'This is REALLY my favorite', fourth, etc. The Brahms Requiem adds up to seven movements of my FAVORITE music!"