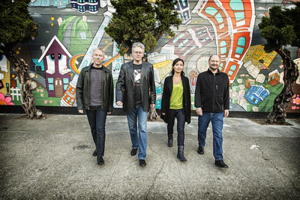 Last month’s performance by the Goat Rodeo Sessions, featuring Yo-Yo Ma and friends at the Greek Theatre, was just the first of many starry nights for the organization and its dynamic director. On Sept. 7, superstar tenor Plácido Domingo arrived at the Greek in a rare concert appearance, a collaboration between Cal Performances and Another Planet Entertainment.

The bulk of the season’s programs will be presented in Zellerbach Hall, Hertz Hall, and Wheeler Auditorium (all on the UC Berkeley campus) and in nearby First Congregational Church. But after the concert by Plácido Domingo, Tarnopolsky says he’s making additional plans for the Greek Theatre. Given the amphitheater’s historic connection with Cal Performances — actress Sarah Bernhardt performed there in 1906 in support of earthquake relief, marking the start of one of the West Coast’s most successful arts-presenting organizations — it seems a natural thing to do. MO< “Next summer, you’re going to see several more performances at the Greek from Cal Performances,” said Tarnopolsky. “We’re planning to do a lot more classical music there. It’s an absolutely magnificent experience to be there, and for a venue of its size, it has an incredible intimacy and beautiful sound. I think it’s a gem of a space for outdoor classical music.”