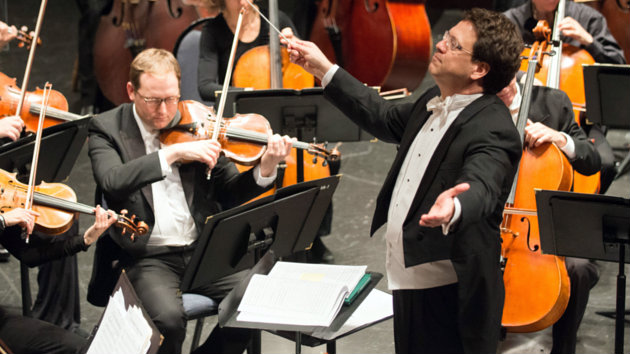 In July 2014, it looked like curtains for the California Symphony. “Is it worth keeping this going?” the board asked itself, and for a long moment there was silence.

The symphony opened in 1986 in Walnut Creek and has become the only all-professional orchestra in Contra Costa County. Despte the name, it plays only in the Bay Area. The symphony is led by Music Director, Donato Cabrera and has spun off the careers of violinist Sarah Chang, cellist Alisa Weilerstein, and composers such as Mason Bates, Christopher Theofanidis, and Kevin Puts.

The board took a deep breath and decided the symphony was worthwhile and the future just bright enough to see at least financial stability.

That led to the hire of a new executive director in October 2014: then 31-year-old Aubrey Bergauer, whose experience had been in marketing, media management, and audience development. She had worked at both the Seattle Opera and the Seattle Symphony, and notes, “I’ve always been young for the positions I’ve held in this industry.”

Since her arrival, Bergauer has erased the previous year's shortfall of $280,000 and brought the ledger almost to zero — even as the budget increased by 15 percent this year. She has doubled the number of donor households over the previous year; increased individual giving by a third; increased per concert paid attendance by an average of 16 percent over the last season; and inaugurated a collaboration with Postmodern Jukebox at the July fundraiser, which was a wild success and brought in more than 500 attendees. More than half were new to the organization.

We spoke to her the other day about her success. She often answers questions beginning with, “Sure.” That marketer’s verbal gesture, followed by one beat: ‘Sure… so I believe that such and such is true.’

We asked about her reaction to the buzzword of the day, ‘relevancy,’ in describing the role of symphonies.

“Sure,” she began, “but personally, I don’t use that word. I say ‘interesting’ and ‘entertained’. So, much of our challenge lies as far as programming is concerned in entertaining our core audience.”

To promote the symphony she rejects such terms and phrases as, “world class orchestra,” Or, “we’re the only, local, all-professional orchestra.”

“What does that even mean?” she told us. “Does that really resonate with the person in the street?”

Bergauer’s first order of business was to address a younger audience, which she defines as under 50. She made the website mobile-friendly and hired a new designer — “because my first thought was not to put the music director’s face on everything. There are people who love Donato, and we want them to love Donato, but a first-time concert buyer doesn’t see his face and say, ‘that’s Donato Cabrera.' They don’t know who it is.”

"You must take risks and try new things. It takes some guts to say, ‘no we’re not going to cut, instead we’re going to build a future. let’s go.’ ” - Aubrey Bergauer, California SymphonyAnother of Ms. Bergauer’s innovations is that she has made the ‘front office’ data-driven. We asked her what that meant.

“Sure,” she said. “What that means is that in all my marketing campaigns. I don’t guess. I never have to guess to see what works, because I can look at the data, whether historical or real time, and then run with it. I can look at the clicks, and see who’s buying, and what the conversion rates are in real time.”

As for programming she says she’s a traditionalist. “I love the old warhorses,” she said. “But I think whatever you offer it’s all in the presentation.”

She includes program notes as part of the presentation.

“Do you have to be an anthropologist to understand it? I have a music degree and sometimes I go to major symphony orchestras and, to be totally blunt, I’m bored by what I’m reading. If somebody doesn’t have that background, what do they really need to know? We live in the world of twitter; there’s something to be said to be said for brevity.”

If Ms. Bergauer sounds beguiled solely by the Xs and Os of symphony management, she also stands firm on one other point, “I really believe you can’t cut your way to health or success. Whether you’re talking about wages or programs. So many orchestras, large and small, make that mistake. You just can’t keep cutting; You must take risks and try new things. We’re growing; it’s working, but it’s risky. It takes some guts to say, ‘no we’re not going to cut, instead we’re going to build a future. let’s go.’ ”