Saturday, July 26. The Carmel Bach Festival presents two ‘family’ concerts: at 11 a.m. at the Sunset Center in Carmel, a 45-minute musical voyage around the world blending narration, music, and images led by Festival director, Paul Goodwin. Then at 4 p.m. in All Saints Church, a twilight chamber concert featuring the festival’s Youth Chorus, directed by John Koza. We highly recommend both. Ticket reservations and a complete festival calendar, bachfestival.org.

This 77-year-old festival, which runs through July 31, is set in downtown Carmel at the epicenter of quaint. Carmel is just south of Monterey, and half an hour north of Big Sur, along the incomparable Hwy 1. 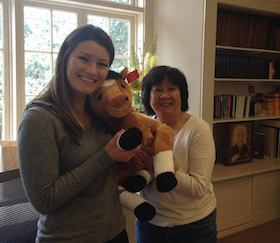 “We felt it was just crazy for the festival to be missing a proper kids’ concert,” festival director Paul Goodwin told us. “It was just so obvious.”

Goodwin 58, a renaissance musician and conductor born south of Coventry, came to his position in 2011, and shortly after arriving told us this about the art of conducting: “For the audience, you want to take them on a journey … But, of course, you have your back to them … you are the magician doing all these things; you’re looking at the audience through the eyes of the musicians. Not unlike driving by looking in the rear view mirror.”

So Goodwin wanted a proper kids concert but not a trope tied to the likes of, say, Paddington Bear. He wanted something fresh and asked festival trombonist, as well as composer and educator, Suzanne Mudge to take control. The result is a story about a 7-year-old boy named Leonard, who wants to conduct music. His parents insist he’s too young and give him a toy trumpet instead and then a stuffed horse which the boy names Rasmus. Leonard also wants to travel the world but, again, his parents tell him he’s too young and give him maps instead, which he puts on the walls of his bedroom. And so begins his imaginary adventure, with Rasmus at his side. The journey includes musical stops in Italy, Mexico, England, France, Hungary, Russia, Egypt, and China, and finally the starting point, America.

That’s the plot; meanwhile Goodwin is narrating and, with each border crossing, changes hats and costumes. The mood is participatory; kids are encouraged to come to the concert in costume. “If it’s a success we will do it next year,” the maestro told us. “And it would be nice because we can also do it in the community, in senior homes and churches for example. It could also be translated into Spanish and done in Hispanic communities. And these adventures could extend to the ocean and space.” 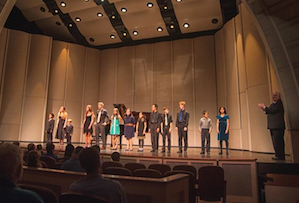 The festival’s 16-member, auditioned youth chorus is a mix of outstanding singers from high schools in Salinas, Monterey, Watsonville, and Santa Cruz, as well as the San Francisco Conservatory. They were brought together and began rehearsing in early July, and will perform at other festival events. This is the festival chorus’ 10th year.

“This is the most top-notch youth chorus I’ve been in,” Justin Gaudoin told us earlier this week. He’s a baritone transitioning to tenor and has been with the chorus for six years. He is studying at the San Francisco Conservatory. “Usually at this stage of preparation there are one or two pieces where not everyone has learned their part, but that’s not happening. We’re making music rather learning our parts.”

The program, titled “The Italian Job” includes works from several 16th and 17th-century composers including, among others, Lodovico Viadana, Luca Marenzio, Giovanni Gastoldi, and Josquin Desprez, as well as a few later composers.

Symphonie Constant, a 17-year-old soprano, noted that chorus members have formed instant bonds. “The training has been very intense, morning and afternoon, and it’s just brought us together. The result is we’re not nervous and we really help each other out.”

Indeed the rehearsals have been going so well that occasionally Koza will stop the rehearsal and say, “do that one more time; it was so good, I just want to hear that again.” Koza has told the group he thinks this is best youth chorus in years.

“For me, I’m a thinker,” says Gaudoin. “But when as a group we pass a certain threshold, there’s that click and everyone is on the same wave length and it’s all just one thought.”

Free: Festival-related concerts include a community concert on Thursday, July 24, 7 p.m. at the Oldemeyer Center in Seaside. A light music program features members of the Festival’s professional ensemble. Also, there’s a Youth Chorus Member Showcase on Friday, Aug. 1, at 5 p.m. in All Saints Church in Carmel. This informal recital showcases talented high school-aged singers who comprise the Youth Chorus.