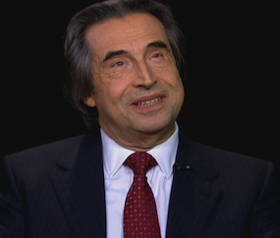 * The Charlie Rose Show had a superfluity of great interviews with prominent conductors in late December. The two best: Riccardo Muti (who called the Chicago the "best" orchestra in the world, in the league of and a bit ahead of Berlin, Vienna, etc.) and Gustavo Dudamel (with wonderful anecdotes about his childhood days, playing maestro) on the same day, Dec. 28. Click on their pictures to see video of the segment.

* Requiem at (not for) a construction site: Hamburg's amazing Herzog & de Meuron Elbphilharmonie (Philharmonic Hall on the Elbe River) is still incomplete, years and millions of euros beyond its planned opening. Still, hardy North Germans rallied on the site for a community performance of Ein Deutsches Requiem during the holidays.

Originally budgeted at 77 million euros, for completion in 2010, the hall is costing well over a half a billion euros and opening is hoped for in 2017 (by which time my bags will have been packed for a decade). A Deutsche Welle interview at the end of 2012 hinted at the possible final cost of 2 billion euros, probably in exasperation. The positive side: look at the Sydney Opera's similar agony in becoming a reality, but see its significance once done — Hamburg may well end up with something similar.