The San Francisco Girls Chorus plays tonight through Sunday with the San Francisco Symphony, under the baton of Michael Tilson Thomas, in Mahler’s 3rd Symphony; on March 6, they perform with the award-winning visual arts organization, Creativity Explored. Mid-March, the chorus performs with the Stephen Petronio Dance Company’s production of Like Lazarus Did at Yerba Buena Center for the Arts. At the end of March, following the biblical arc, they will stage Benjamin Britten’s Noye’s Fludde, again in collaboration with Creativity Explored. 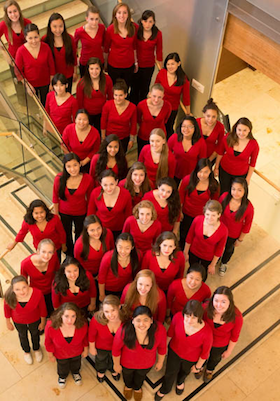 Earlier this week, we reached Lisa Bielawa, the chorus’ artistic director. (Valerie Sainte-Agathe, is the principal conductor.) Bielawa is an artist for all seasons — last October, you may remember, she conceived and orchestrated the ‘happening’ at Crissy Field, a "Broadcast" in which some 800 musicians played her 60-minute sonic-music composition. This was the second in a series of like events that will occur in airfields around the world in coming years. Details are secret.

But just now, she’s put aside plotting scenes and composing to be an artistic director and to that end has been doing a lot of traveling. She is an inveterate travelerer by nature, and has just returned from what you might think of as a diplomatic tour of Scandinavia, with stops in Estonia, Finland, and Sweden. Next week she leaves for Australia and from there to Hungary.

“I’m reaching out,” she told us. “Working to engage with people, and in some cases, just cold calling. It’s about forming new friendships and sometimes just ‘sharing notes’ with other directors, comparing how many hours we rehearse, for example, how we teach music theory, how we choose repertoire, sort of the nerdy aspects of chorus life. It’s been inspiring and it’s opened my eyes to a lot of new things.”

In Australia, Bielawa plans to meet with the director of the Cairns Gondwana Indigenous Children’s Choir, a program not unlike El Sistema. It’s all part of her effort to explore links between culture and repertoire.

“One of the things I’m excited about is the possibility to reach beyond choral music, to connect repertoire to other arts, text for example. And so, in addition to a conventional repertoire, we might reach out to a community of poets, to find a broader cultural context in which to celebrate young women’s voices.

“MTT said we should sing like street children, not so carefully, which I thought was really interesting. In other words, it shouldn’t be all perfect, we should give it more liveliness, more energy.”  — Sarah Ancheta, Chorissima

In preparation for their concerts with the San Francisco Symphony, Chorissima, the senior chorus with about 60 singers, had their first rehearsal on Monday night. For many, it was their first encounter with both the women’s chorus and Michael Tilson Thomas.

Sarah Ancheta, 14, is a singer in the Chorissima ensemble. “We warmed up with the woman’s chorus. We were standing right in front of them; their voices are so huge and rich.”

Asked about getting direction from the Maestro, and particularly facing such an extraordinary piece of music, Ancheta replied. “He said we should sing like street children, not so carefully, which I thought was really interesting. In other words, it shouldn’t be all perfect, we should give it more liveliness, more energy. Be more free so that the sound could really reverberate.” Bielawa added that MTT talked to the chorus “like a theater director. He really gave them a sense of dramatic context.”

Because this year’s program was largely developed by the interim artistic director, singer and conductor Brandon Brack, Bielawa notes, “I can’t take any credit here. I would only say I couldn’t have done it any better; this is exactly the kind of approach that will help these young women as they grow in understanding the ties between music and community.”