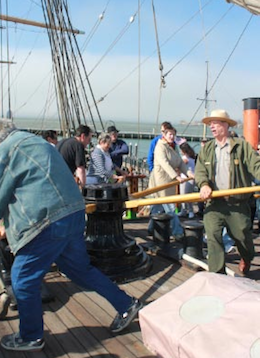 Sailors’ songs have served as a siren to classical composers from Ralph Vaughan Williams to Percy Grainger to Benjamin Britten and beyond. But Peter Kasin may be the first person — and perhaps the only one — lured by sea chanteys into Federal employment.

Kasin, a native of Oakland, has for 20 years served as a uniformed ranger in the United States National Park Service. It’s by choice, not accident, that he’s stationed at the San Francisco Maritime National Historical Park. His office is adjacent to the Maritime Museum, but his prime directive lies a few blocks away, aboard the big 19th-century vessels moored along the long wooden pier extending from the tip of Hyde Street. It’s there, in full voice, that Kasin leads the free Chantey Sing, on the first Saturday evening of each month. It’s an energizing participatory call-and-response experience, just as it was when those vessels, the schooner C.A. Thayer and the full-rigged ship Balclutha, carried their hard-working, hard-singing crews over the Pacific and Atlantic Oceans.

“It stands as some really great music,” says Kasin about the sailors’ repertoire of songs, called chanteys (spelled “shantys” in Ireland and the British Isles, from whence came many of the melodies and rhythms, as well as the original singers). “But it also has a way of drawing you into our history.

“These songs tell such wonderful, dramatic stories, about life at sea and on shore,” Kasin continues. “They also speak for a lot of universal concepts, such as fear, loneliness, courage, romance, lust. You find all those in these songs. It connects you with yourself, in so many ways. And that’s the beauty and magic of singing these songs together, on a sailing ship.” The covered “shelter deck” of the Balclutha serves as the current location of the monthly Chantey Sing, the first such in modern times and the only such supported by your taxes. 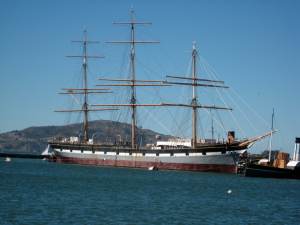 Growing up in Berkeley, Kasin first heard chanteys on a 1957 LP he repeatedly borrowed from the public library. It featured English folksingers Ewan MacColl and A.L. Lloyd, and it accorded with Kasin’s bourgeoning interest in Celtic music and fiddle. In 1989, friends from the Starry Plough, a Berkeley Irish pub, invited Kasin to accompany them to the Hyde Street Pier, where the Chantey Sing had been launched eight years earlier. “I saw a park ranger [Celeste Bernardo] running it, and thought, That’s unusual!”, Kasin recalls. “And I immediately fell in love with the place. So I introduced myself to the ranger, she suggested I volunteer at first (which I did), and then I got hired in ‘92, and in ‘93 I began booking music for an annual sea festival.”

During Kasin’s apprenticeship, he learned about how different chanteys were fitted to different tasks during the so-called “Golden Age of Sail,” from the mid-1800s to the early-1900s, when sailing ships were busy and big enough to require large groups of men working in concert. “Whisky Johnny was a long-haul chantey,” Kasin explains, “which means, a chanteyman [song leader] would sing, If you ever go to Frisco town, and the sailors would follow with, Whisky, Johnny, and they’d haul on both those words,” pulling on a halyard or rope to raise a large sail. “A good example of a short-haul chantey, when you just want to get a last few pulls on a sail, is Boney was a warrior/Away a-yah, and on the last word, you give a pull.

“Pumping chanteys were where you’d have to pump water out of the ship, turning the big flywheels around, with a very constant motion: A plate of Irish stew/Wouldn’t do us any harm. Some of these were interchangeable with capstan chanteys, where you’d be heaving rather than pulling. Like Paddy Lay Back, where you’d have a short chorus, and then a longer, grand chorus, marching around the capstan, and it’s constant.”

Kasin learned some of these chanteys from recordings and from Shanties From the Seven Seas, a book published in 1961 and written by Stan Hugill, who’d been one of the last working British chanteymen, four decades earlier.

“These songs tell such wonderful, dramatic stories, about life at sea and on shore. They also speak for a lot of universal concepts, such as fear, loneliness, courage, romance, lust.” - Park Ranger Peter Kasin

“I was listening to a lot of MacColl and Lloyd, and I tried to take on some of their inflections,” says Kasin, “but once I got into the chanteys, I found my own voice.” His is the sort of strident tenor which could have commanded attention on the high seas. “You had the sound of waves crashing against the ship, and wind running through the rigging, so the chanteymen had to be heard loudly, above those sounds. And they had to have higher voices; they wouldn’t have gone for a deep bass or baritone.”

Exploring the World in Song

The ethnicity of the crews resulted in some mixing of the music, Kasin notes. “White sailors would value singing everything on one line, without harmonies; that was considered by them the correct way. But black sailors from the West Indies, they had very intricate harmonies to their chantey singing. Stan Hugill writes a lot about chanteys from the southern states, which he called the great shanty mart, where there was a real connection between Irish and African-American chanting, which melded together in a number of chanteys,” some of which bear traces of West African dialect.

Kasin was exposed to a greater variety of chanteys and performers on a government-funded visit in 1999 to the annual Sea Music Festival at Mystic Seaport, in Connecticut. Since then, he’s been able to book some of those performers at the local summertime Festival, reinstated in 2006 along the Hyde Street Pier. He’s also recorded, with the Hyde Street Chantey Singers, and has hosted the annual autumn Concert Series aboard the Balclutha. (A bounty of young locals under the rubric Emerging Performers will perform on November 17.)

In the southern states, which he called 'the great shanty mart,' … there was a real connection between Irish and African-American chanting, which melded together in a number of chanteys.” – Kasin

Meanwhile, the monthly Chantey Sings have been “going through a real renaissance,” reports Kasin, “especially with last year’s publicity around the 30th anniversary. It’s also because of social media: It’s become a young, hip thing to do.” Although San Francisco is one of few regularly scheduled sings, there are occasional visitors from other cities and countries, some of them importing unfamiliar chanteys to share. Kasin, who took over leadership of the Sings from retiring ranger Revell Carr in 1996, conducted the Park’s first-ever chantey workshop on a Saturday afternoon last month, an indicator of the activity’s popularity. “You don’t know what’s gonna be sung until you get here,” Kasin pointed out to the several generations of would-be chanters. “If you go to a sing in New York, you might hear a song in a different way than we do it here.”

Kasin encouraged the workshop participants to try to free themselves from their printed lyrics. “It’s just so fun to have your face up, looking at folks, all singing together,” he said. “And it will get to your brain a lot easier.” He also urged liberation from what may have impressed some in Britten’s Billy Budd or Grainger’s “shanty” settings. “There are different ports into this kind of music,” Kasin allows. “But I think it’s incredibly important that each generation know the difference between classical music and folk music.”

To take part in the next Chantey Sing, email your intention to Kasin, at [email protected], and be onboard the Balclutha by 8 p.m. on Saturday, November 3. Be prepared to stay in good voice, in good company, till midnight. Kids will get their own chance to chant there on the following Saturday afternoon, from 3-3:45 p.m. Plan your visit.