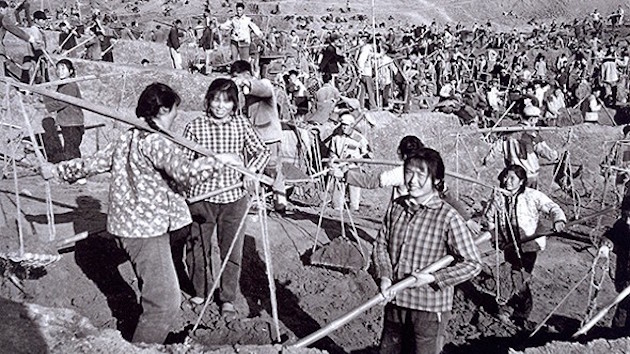 During the decade between 1966 and 1976, when many of us Americans now in middle age were exploring our youthful freedoms of thought and behavior, including our expression in speech and the arts, Chairman Mao Tse-Tung was imposing restrictions on some 17 million of his own younger people, in Communist China. 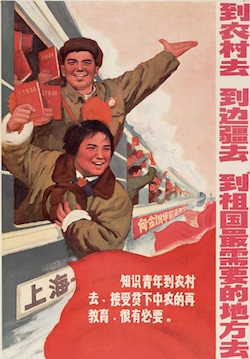 Mao had adopted Marxism-Leninism in the 1920s, led a military overthrow of the Western-friendly Nationalists, and in 1949 declared China to be a one-party Communist state. The best-known part of his later Cultural Revolution is his attempt to purge his highly populated nation of all traces of non-Chinese influence, including Western classical music. Less known outside of China is his forced relocation of the majority of the younger generation from cities to remote villages, where they were separated from formal education and forced to work in government-run agricultural operations.

Removed from their homes and from urban influence, these so-called Sent-Down Youth were expected to emerge as better communists. The consequences, personal rather than political, were drear, and the survivors have found little examination of the historic blunder within China, and practically none in the outside world, before the creation of Ask the Sky & the Earth: An Oratorio for the Sent-Down Youth, about to get its first major Western showcase with the Golden Gate Symphony Orchestra & Chorus.

The genesis of the piece is itself inspirational and a tribute to the power of music. The composer, Hong Kong-based Tony Fok, had not encountered the librettist, Wei Su, for four decades, since they’d collaborated on a politically correct song about heroic workers at the national farm to which they’d both been sent, on Hainan Island, at China’s southern tip. “[Fok] wondered, ‘where is this guy now,’ and he got my email,” says Su, now a professor of East Asian Studies at Yale. “Then he flew to America in 2007, and reminded me about the Sent-Down Youth Movement’s 40th anniversary the next year, and said, I want you to cooperate on a cantata, you are my first choice for lyrics. We talked all night, and I said, ‘I want to do something to commemorate our youth, too.’”

Su anticipated premiering the piece in his homeland, but, “my lyrics [in Mandarin] had to be very skillful, to get past [Chinese government] censorship, because they had to go through every sentence,” he reports. “I mixed two kinds. I wanted to keep the beautiful youth time, our loves, our romantics, idealism, that’s the positive way. But we also had many sadnesses at that time, and many question marks: what is our future, what are we doing here?” 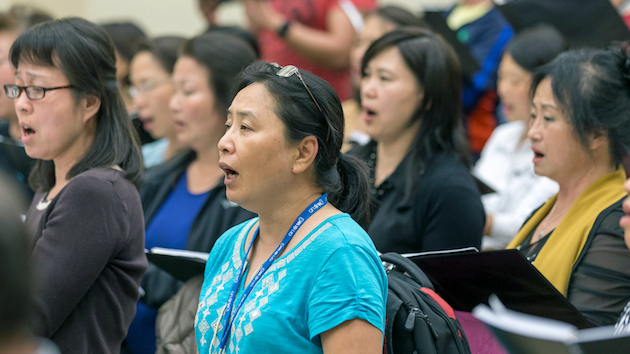 The music would also present a mix. Although the piece was composed for Western-trained musicians and singers and it cleaves to a cantata/oratorio form familiar in the West, Su and Fok traveled back to Hainan Island to observe and notate a folk dance, and also incorporated references to the influence of Soviet Russian music in China at that time, despite Mao’s having labeled the neighboring communist country as “revisionist”. A former sent-down youth in high political office helped secure a performance of Ask the Sky at the Guangdong Theater in southeast China, and another at Shanghai, where Su obtained a recording of the piece and a business card from a conservatory conductor, eager for an American alliance. Su brought both back to Yale, where his and Fok’s piece came to the attention of Korean-American Shin-ik Hahm, conductor of the Yale Philharmonic, and Tom Duffy, conductor of the university’s bands.

“Duffy said, ‘This is world-class level, I never thought of Chinese music doing like that, I want to perform this’,” Su recalls in idiosyncratic English. “Hahm said, ‘No, I want to perform it first!’ The music school dean [Robert Blocker] said, ‘What is the hell of that piece, why do two Yale conductors want to perform it?’” Duffy got the nod to perform a band adaptation of the score, and Ask the Sky went on to performances by small ensembles around the country. “That’s what you call a snowball,” chuckles Su.

Helping to evolve the piece was another former sent-down youth on the Yale Faculty, Charles Lu, an informatics specialist, director of the university’s Chinese chorus, and a longtime friend of Su. Lu calls Su “a brilliant writer, who walks the dog, looks at the snow, and comes back with a poem.” Of Mao’s misguided movement, Lu comments, “Many of the youth didn’t have the opportunity to be educated in college, so their competitiveness in the market was worse. The movement affected not only their lives, but their parents’ [some of who were branded ‘black,’ politically undesirable, by authorities] and, later on, their children. So I want to help communicate to Western society why the Sent-Down Youth Movement was so tragic.” Lu has acted as impresario for Ask the Sky, and joined Su and others in a discussion seminar about sent-down youth at the Pleasanton Library last month. 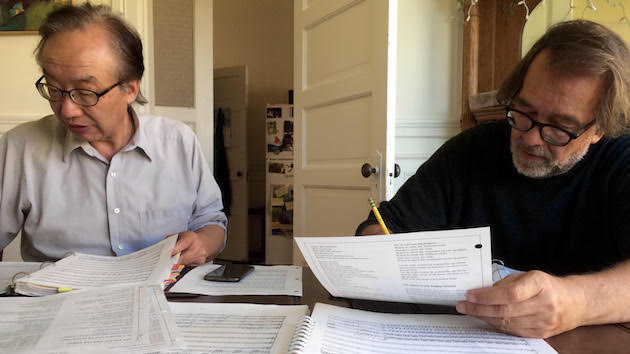 Urs Leonhardt Steiner, music director and conductor of the Golden Gate Symphony & Chorus, was made aware of Ask the Sky via the Ronron ensemble (the name means “harmony” in Mandarin), an East Bay Chinese chorus which asked to join his chorus in last year’s performance of Beethoven’s Ninth at the Mission Dolores. “I started going out to teach them the Ninth, not in Chinese but in German — I’m Swiss-German,” Steiner recounts. “I was intrigued by the concept, and it opened a door into their culture. Then I gave this soprano a ride home, and she began immediately to talk about Ask the Sky, and we put it on in the car.”

Steiner, though ignorant of Mandarin, heard potential in the piece, and when told the soprano would be participating in its performance in Frankfurt, the conductor arranged to attend, en route to his annual visit to his hometown of Chur, Switzerland. He ended up scheduling the piece for the launch of his own ensemble’s 2016/17 season, and brought Lu in to work some changes to the score and to begin preparing several Bay Area Chinese choruses to join the Golden Gate Symphony’s chorus.

“When I went to Frankfurt, the melodies were very easy to listen to, but not very exciting, but you could feel the change in the feelings of the orchestra members, following the excitement of the singers, as the piece went on,” says Steiner. “I might have called it Late Romantic, or a John Williams type of orchestration.”

“There’s influence from Beethoven and Tchaikovsky,” offers Su. “And at one point, it’s like Copland’s Fanfare for the Common Man,” adds Lu.

“What I thought I could bring to the music was much more of an interpretation, with some serious attention to dynamics,” Steiner states. In his three-day work session with Lu, “I took some brass out, and cut out the ending, which was kind of a downer and deserved a more glamorous stop.”

“I really admire Urs, his passion about music and intercultural exchange,” testifies Lu. “This will be the first time an American conductor has had his own inspirations [about Ask the Sky] and has been to all the rehearsals. And another big difference is that 50 percent of the singers will be Americans.” 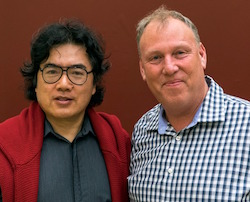 Working with Chinese choruses on the Beethoven and the present project, Steiner became aware of cultural and musical differences, including the Asians’ expectation of longer rehearsals. “It relates to a totalitarian concept of living,” he supposes. “Also, they are used to singing in two parts [male and female], not four, but we have four parts, and that’s going to stay.” To facilitate exchange, he’s alternated seating of non-Chinese and Chinese singers during rehearsals, and had the former trained in phonetic pronunciation of Mandarin. (English translations will be projected to audiences.) Out of devotion to Ask the Sky, 20 additional singers from across the U.S. will fly in at their own expense to join the locals, as they have for previous performances.

The piece will be accompanied by Golden Gate’s full symphonic orchestra — including marimba and xylophone — and Chinese tradition will be represented by additional percussion, xiao (bamboo flute), and morin khuur (Mongolian horsehead fiddle). The latter instrumentalist, Master Bo Li, will also perform his own adaptation of a Chinese folk song, “Legend of Matouqin.”

Steiner arranged the rest of the program in keeping with the featured Chinese work. “I told Michael Kimbell, the principal clarinet player and a very good composer, that I wanted to commission a reflection on the Chinese text, for chorus and orchestra, and he’s given us Remembering the Atonement, with poetry in English by a Russian woman, Viktoriya Neverov-Krstic. We’ll play that right before Ask the Sky. And we’ll open with the Beethoven Six, which is about the countryside and emotions.”

Emotional evocation of the Chinese countryside is also thematic in the eight movements of Ask the Sky, for which Lu provides a programmatic synopsis. “The stories talk about leaving home, working in the field, young people dating, and sadness at not being able to see family. There’s also the death of some of the youth [who were sent into dangerous situations], and, finally, going back to the villages after so many years to give thanks to the villagers.” 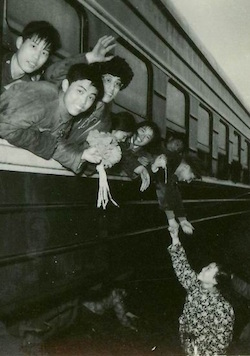 Preparing for the Bay Area performances, Lu became aware that, “there are so few English publications about the real life of the Sent-Down Youth Movement, though there’s much more about the violence of the Cultural Revolution.” He’ll be taking part in receptions following the performances here, as will Su, Fok, and Steiner, with a video presentation by the conductor’s wife, documentary filmmaker Kate Stilley Steiner, based in part on historic photographs submitted by Lu.

Despite dramatic changes in the goals and operation of the communist government, the Sent-Down Youth Movement is still a touchy topic in China. “The media there are not allowed to talk much about it,” Steiner observes. “And I’ve noticed within the [expatriate] community here that there are extreme differences of opinion about what should be and what shouldn’t be said. But the hunger for Western classics is huge.” Su, who makes regular trips back home, concurs. “In the West, always the [classical] audience is the senior people. But in China now, all the classical concerts, the audience is very young. It has become a new fashion for dating girls.”

On this side of the Pacific, Steiner found that integrating Chinese performers in his programs, as he did with last year’s Beethoven, also bolstered the size of his audiences. He plans to retain his Chinese choristers, and to get major choral works translated “into their own language. The connection to their excitement is very healthy to our Western world, particularly in California, where we can be blasé.” 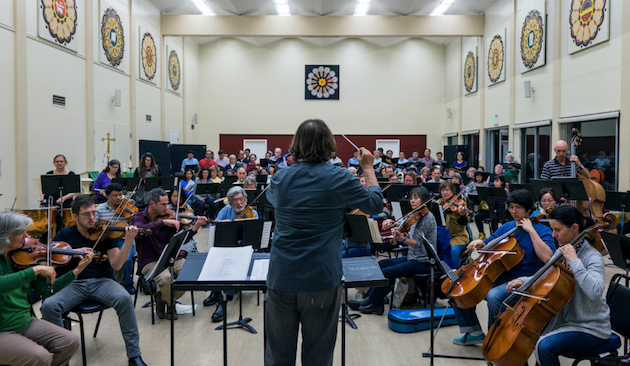