There are bigger spectator sports, but none with more participants than choral singing. Surprising but true: more Americans sing in choruses, chorales, choirs, glee clubs and other vocal groups — both professional and amateur — than engage in football, baseball, tennis, even Greco-Roman wrestling. (Fantasy Football has an impressive figure, with an estimated 27 million participants.) 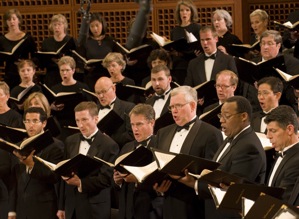 Chorus America, which is holding its 34th annual convention in San Francisco June 8-11, claims that 42.6 million people in the U.S. sing in more than 270,000 choruses today. That's an incredibly high number, based on questionable survey methods and it creates such unlikely scenarios as 157.7-member average vocal groups. But the point is clear and obvious: Choral singing is wildly popular.

"Data collected by Chorus America show that an overwhelming number of people regularly sing in more than one chorus at a time," says Ann Meier Baker, president and CEO of the service organization based in Washington, D.C. "It really becomes a way of life for this staggering number of people. And since most choral singers started singing as children and continue to sing throughout their lives, this way of life truly lasts a lifetime."

What is the role of Chorus America?

San Francisco Symphony Chorus Director Ragnar Bohlin compares the older and bigger American Choral Director Association with Chorus America, which, he says, is "aiming at directors of professional and independent choirs, as opposed to ACDA, which at the time was focused more on high school and church choirs. 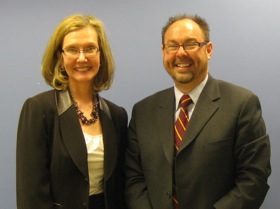 Over the years both organizations have started to overlap each other, so that they have activities directed to choirs of all categories. "Chorus America," says Bohlin, "is known for having a very exciting array of lectures, both on musical and organizational topics, high level performances and workshops of various kinds. It is also a great way to connect with colleagues from all over the U.S."

Baker says while some of the other organizations focus specifically on the choral director, Chorus America supports the whole organization:

This is especially important for independent choruses — those not supported by a church or a school. In addition to artistic information we share, these independent choruses need Chorus America’s help with governance, management, marketing, and other information that is critical for nonprofit organizations to thrive in these times. If a school choir, for example, doesn’t have a big audience for a concert, they still have the support of their institution. But if independent choirs have lots of empty seats in the hall and losses earned income, they can lose their shirts.

For Baker, choral singing is, "part of my own DNA. My Mom was a high school choral director for more than 35 years and served in various regional, state and national leadership positions with several different organizations so I learned a lot from her. I went on to major in choral music education in college, sang professionally for a time, and have held several positions with national music organizations. Chorus America’s work is really at the heart of who I am personally and I’ve been privileged to serve as its CEO for more than a decade." 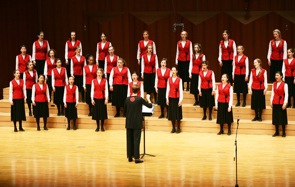 Founded in 1977, Chorus America includes more than 2,000 choruses, with individuals, businesses, and singers among its members. ACDA, started in 1959, serves some 19,000 members. These two and other choral organizations across the country are expected to come together at the National Symposium on American Choral Music, to be held in Washington, D.C., June 29-30, 2012.

The event will showcase the American Choral Music Web site hosted by the Library of Congress, built as a result of a five-year collaboration with ACDA. Initially the site will focus on the period between 1870 and 1923.

Chorus America is returning to the Bay Area, which, Baker says, has an unusually large and diverse choral community.

In fact, a whopping 500 choruses have been identified and catalogued in the Bay Area Choral Directory. The Bay Area’s vibrant choral community and the fact that the conference is being hosted by two stellar ensembles— the San Francisco Girls Chorus and Chanticleer— makes San Francisco the perfect place for our conference. Registrations have flown off the shelf and, for the first time in Chorus America’s history, the annual conference has completely sold out. 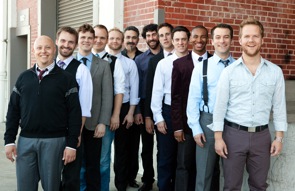 Each day of the conference will showcase a different local area chorus and the San Francisco Conservatory Concert Hall will be overflowing with an avid audience for every one.

In San Francisco, the only Chorus America event open to the public is the "Community Sing With Chanticleer," at 2:15 p.m., June 11, in the International High School Gymnasium, at 150 Oak St., adjacent to the San Francisco Conservatory of Music. Reservations are required and can be made online. Chanticleer and San Francisco Girls Chorus are co-hosts of the conference.

For the estimated 500 members of Chorus America attending the conference, activities include concerts, open rehearsals, conducting masterclasses, special sessions on specific repertoire, as well as sessions for chorus directors, managers, board members, singers, and patrons.