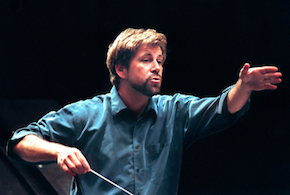 Chris Stevens, the late U.S. ambassador to Libya, may be the subject of continuing headlines and political feud elsewhere, but in the Bay Area, it's up close and personal.

Stevens' stepbrother is David Commanday, who will be the guest conductor at California Symphony's Oct. 18 concert. He has made program changes and named the concert "Salute to a Hero" in Stevens' honor: "Chris represented the United States throughout his career in the most difficult political and ideological settings, and always found ways to make friends to foster understanding and progress. He 'waged peace' with great success, and great courage, and ultimately gave his life, serving the American ideals of freedom, democracy, and human rights."

David Commanday, founding artistic director for Central Illinois’ Heartland Festival Orchestra, is one of seven conductors auditioning during the 2012-2013 season to be the new music director for the Walnut Creek-based orchestra, which was led for 24 years until 2010 by its founder, Barry Jekowsky.

According to an announcement from the family, a memorial service for Stevens will be held in the rotunda of the San Francisco City Hall on Oct. 16 at 4:30 p.m. The public is invited.