Musical instruments each have their evolutionary heroes — and the double manual concert grand piano is one of them. 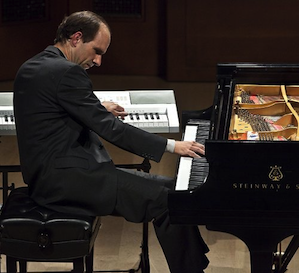 If the modern flute had Theobald Boehm, and the electric guitar Adolph Rickenbacker, then it’s safe to say that the hero of the latter-day “double manual” concert grand piano is Christopher Taylor. For it’s he who has rescued the rare instrument from obscurity by performing with it wherever he can.

But Taylor is not just rescuing it, he’s inventing a double manual piano of his own. The instrument he is using for inspiration, is the one he is rescuing from obscurity: the dual-manual Steinway-Moor piano. That instrument offers its player two keyboards — a lower one with the standard 88 keys and an upper keyboard with 76. The upper keys are one octave shorter on the treble end. The upper keys also sound one octave higher than the corresponding key on the lower.

It’s with this instrument, which dates back to 1929, that Taylor has been performing Bach’s “Goldberg Variations” as of late. He performed the variations on the instrument last Friday, at the Mondavi Center for the Arts at UC Davis.

Taylor has been touring with the instrument over the last two years, whenever and wherever a presenter is brave enough to pay for its costly transport, usually via rail. In these days of shrinking presentation budgets, it raises the question “why bother with transporting a piano at all?”

“Pianists for the past 150 years have had to wrestle with rearranging those variations so that they fit on one keyboard — and that can be quite a tangle,” said Taylor.

Bach wrote his variations for the double manual harpsichord. Playing the variations on one keyboard can be an exercise in traffic control, with a pianist’s hands constantly colliding with each other.

“The existing instrument has a one-octave displacement between the keyboards … so that enables you to do certain tricks, for one thing, and it makes playing the ‘Goldberg’ a little easier,” said Taylor.

It was with the “Goldberg Variations” that Taylor, at the age of 21, made a statement at the 1993 Van Cliburn International Piano Competition, where he placed third. “The ‘Goldberg’ has been part of my repertoire for a long time,” Taylor said. “I played it at the first round of the Van Cliburn … which is not the kind of piece that typically gets played at these big piano competitions. So I was able to make a mark with it. When I learned the piece, it was long before I knew about the Steinway-Moor, so I learned to negotiate the collisions and ways to overcome those problems,” he said. “Though it’s really nice to have the luxury of spreading out the hands so they do not interfere with each other.”

Unlike a standard concert grand, the keys on the Steinway-Moor’s lower keyboard have a raised section that opens up new ways of playing and chord-making. That setup allows the player more polyphonic textures as well as increased volume power, said Taylor. “And chords which extend over two octaves may be played with one hand,” he added.

At one time, the existence of double manual keyboards was no rarity — several piano manufacturers, in fact, made them in the early 20th century, though few exist today. The Steinway-Moor is the only one existent made by Steinway.

The instrument was conceived by a musician and inventor, Emmanuel Moor (1863–1931), who sold the idea to a few piano makers. Steinway built the piano in 1929 at the Steinway factory in Hamburg, Germany. That instrument spent the first part of its life inside a Berlin concert hall. It was damaged during World War II and wound up at Steinway’s Brooklyn, N.Y., factory after the war. Somehow, though, the instrument never caught on. “It was an experimental model for them,” said Taylor. “Of course, 1929 was not the best year to introduce an expensive new product. So Steinway never tried it again.”

In 1961, the piano was purchased by the University of Wisconsin for artist in residence Gunnar Johansen. The piano has been on the campus ever since. Johansen died in 1991. Taylor joined the university’s piano faculty eight years later, and he became interested in restoring it — the work was completed in 2007.

“Pianists for the past 150 years have had to wrestle with rearranging [Bach’s ‘Goldberg Variations’] so that they fit on one keyboard — and that can be quite a tangle.” – Christopher Taylor

Yet Taylor has not been content with simply resuscitating an instrument. He wants to bring it into the 21st century. That pursuit has taken up part of his life the last two years, as he has been in the midst of building a new double manual piano.

“I’ve assumed an inventor’s hat and am making progress on that,” he said. That challenge may be too much for most concertizing pianists, but Taylor, who studied mathematics along with music as an undergraduate, feels he’s up to the task. “I have a patent application in, and with another couple of years of development we will have a new instrument,” said Taylor.

A grant has helped Taylor pursue the project and he has been working with the university’s Institutes for Discovery on computer-controlled machining, he said. The new instrument will differ from the Steinway-Moor in that it will have two keyboards with a full 88 keys. Unlike the original instrument, Taylor has conceived his invention as one in which a single hammer is dedicated to each key played, on either keyboard (with Steinway-Moor, two keys always share a single hammer — wherein a lower and an upper key are controlled by the same hammer).

“With the new instrument you will not only be able to displace by an octave, but you can displace by any interval whatsoever,” Taylor said.

“With two sets of hammers you can repeat notes by playing one note on one keyboard and a note on the other; then you can get this incredible, drumroll-like effect.” –Derek Bermel

The instrument setup is an unusual one in that a console, with the two sets of 88 keys, will drive two “slave” pianos, remotely. The console piano will not produce any sound. Instead, an electronic sensor will record what a pianist is playing and instantaneously send that information across the stage, MIDI style, to two normal pianos that will produce the music.

Prototype Being Put Through Its Paces

So far, Taylor has gotten to the prototype stage, where a small console of 12 keys (six upper and six lower) has been designed to have its sound played on two pianos. “Now it’s a matter of multiplying that,” he noted. “This has taken some thinking about three-dimensional geometry … and also a little bit of basic electrical engineering. I’ve had to learn a little bit of that.”

To that end, Taylor is working with engineer Rock Mackie at the university’s Institutes, building the prototype. “It’s not unusual to work with artists, but it is unusual for musicians,” said Mackie. “The project is an ambitious one.”

Mackie said he is impressed with Taylor’s aptitude for engineering, as well as his passion for the project.

Bermel believes that the time may be right for such an instrument to come to the fore as an evolution of the modern-day piano.

To date, the biggest challenge in building the instrument has been encoding the key strike and transferring that information to the slave pianos.

“Taylor pays for his keep by performing for us — just like Picasso used to pay for dinner,” Mackie remarked.

Once the instrument is built, Taylor hopes to get a piano maker interested in manufacturing more than one. And he has already lined up one composer, Derek Bermel, who said he’s eager to write for the as-yet-nonexistent instrument.

Bermel welcomes the idea of writing music for an instrument where limitations are not known. The possibilities for new music are many, said Bermel, who wrote his first work for Taylor — a solo piano piece titled Turning — in 1995.

“Separated notes on one set of hammers are pretty tough to play, but with two sets of hammers you can repeat notes by playing one note on one keyboard and a note on the other; then you can get this incredible, drumroll-like effect,” said Bermel. “Also, there are some chords you cannot play on the piano because they would be too wide —– you would need fingers that were two feet long!”

Bermel believes that the time may be right for such an instrument to come to the fore as an evolution of the modern-day piano. And he believes there’s a certain randomness to the success of the evolution of a new musical instrument.

“You read Berlioz’ orchestration book, and Rimsky-Korsakov’s, and you see this evolution, over time, of these obsolete instruments,” said Bermel. “At one point they were played all over the place and you have to ask, ‘Why this particular evolution of this instrument?’ I mean, why is the sax not a regular orchestral instrument?”

Bermel is convinced the new double manual piano would never have been invented if not for Taylor. “I can see Taylor following in the footsteps of Adolph Sax or [flute developer Theobald] Boehm,” Bermel said. “He’s pushing the boundaries.”