Charles Ives was a terrific young musician, son of a bandleader, who went to Yale and studied composition with the highly regarded Horatio Parker. But he had wild musical ideas in his head and his Yankee practicality discouraged him from trying to push those ideas through a conservative musical establishment. So he became rich as a successful insurance executive. 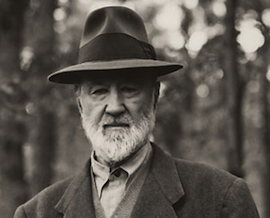 But his dark secret was that he kept composing the wild music in his head, and putting all of it into a drawer — with a few exceptions. In 1922, he self-published a book titled, simply, 114 Songs. That collection drew the attention of young Henry Cowell, who praised it and began to publish Ives scores in his journal New Music. Aaron Copland caught on, through Cowell.

In the 1930s Ives, who had stopped composing by that point, used his fortune to help promote performances of his music, as well as other young composers. Lou Harrison, also encouraged by Cowell, wrote to Ives and received a huge crate of his music in reply. Harrison proved a dedicated editor and prepared and led the first performance of the Symphony No. 3 (1904) in 1946, which won the Pulitzer Prize. From then on, Ives’ reputation began to rise, though he didn’t live to see most of it, dying in 1954.

Ives’ music is often about an idealized New England that existed in his memory and imagination. Three Places in New England and the Holidays Symphony are good examples of that strain of his work. But he also admired the Transcendentalist philosophy of 19th-century writers Ralph Waldo Emerson, Henry David Thoreau, and their circle, which resulted in another style of music, including pieces like The Unanswered Question, From the Steeples to the Mountains, and the "Concord" Sonata. Ives loved to hear separate strands of melody crash into each other and combine freely. He was very comfortable with dissonance, believing that it better represented the unruly eruptions of American democracy and its people than well-behaved counterpoint. He was definitely an original, though not completely unconscious of music of his own time. Find out more about Charles Ives in the SFCV Composer Gallery