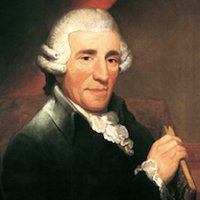 He’s never quite had the popularity of Mozart, let alone Beethoven, but Franz Joseph Haydn, 282 years old this Sunday, was key to both their musical styles. It’s not that he taught Beethoven — he did, but that relationship was not very successful. But Mozart and Beethoven both learned a huge amount from Haydn, who has to be numbered among the most original creative minds of the 18th Century.

As always in history, firsts are relatively unimportant: The people who do something well are the people who get the credit. In Haydn’s case, musicians have long understood that Haydn isn’t the actual “father” (that is, inventor) of the symphony. But his way of handling the orchestra and the form was so original that he might as well be. The string quartet (which, we think, he actually did write the first examples of) would be just another chamber music formation, except that Haydn’s works inspired Mozart to compose a famous set (the six “Haydn” Quartets, 1785-86) in response.

Haydn’s career was mostly spent as a Capellmeister (chapel master, or music director) to noblemen. Since only the richest of those could afford to keep big musical establishments, such as a 15-20-piece orchestra, Haydn ended up serving Prince Nicholas Esterhazy, a Hungarian aristocrat so rich that he built a palace rivaling Versailles, the seat of the French kings.

Unfortunately for Haydn and the musicians, the palace is situated in the middle of nowhere, so that they were isolated for most of the year. “I was forced to become original,” Haydn said of this period. But he was also forced to work hard; for almost a decade, Haydn wrote and/or produced a whole mini-opera season at the Prince’s own theater. That was in addition to the other work he did, writing, preparing, and playing all the music that the household used.

Eventually Haydn was freed to begin publishing the works he had written for the Prince, and from that point on, his star really began to rise. He became famous, but he was used to writing fast and working hard, and he never stopped. He left us tons of great music, some of which you can sample in SFCV’s Composer Gallery, along with fun facts, links and lots of other goodies.