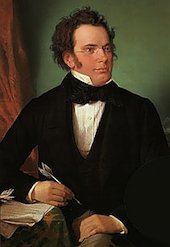 Last Tuesday was Mozart’s birthday and Friday is the big day for yet another Viennese wunderkind: Franz Schubert. If it’s possible to imagine, Schubert wrote more individual compositions and lived four fewer years than his predecessor. And like Mozart, Schubert is a nearly unmatched melodist; great tunes seemed to race from his brain faster than he could put pen to paper or fingers to keyboard.

Schubert’s reputation was just catching up with his output when he died, in 1828. Eleven years later, his “Great C Major” symphony (No. 9) was discovered in his brother’s possession, and its premiere set the seal on Schubert’s fame. He was a major influence on later Romantics for his innovations in harmony and formal structure. In his songs, he proved a master psychologist, creating three-minute portraits that singers continue to mine for insights. But he was not only a miniaturist: Symphony orchestras lean heavily on his Symphonies Nos. 5, 8 (“Unfinished”), and 9; the Overture to Rosamunde; and a few of the later (a term, which here means “the composer was 25 or older when he wrote it”) chamber works are favorites. To keep the wolf from the door, he wrote lots of music for the “home” market: dances, piano duos, part-songs and choruses, many of which are excellent and worth hearing. Which is to say, you could spend more time listening to Schubert’s music than he took to create it. Learn more about Schubert, listen to music, watch video, and read fun facts about Schubert in SFCV’s Composer Gallery page.