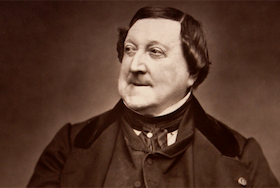 Most classical music mavens celebrate the birthday of Mozart, or Beethoven, or Bach. Not me. I have an annual celebration of opera composer Gioacchino Rossini, whose birthday is on Friday (or Saturday — he was born on Feb. 29 in a leap year ... cool in and of itself.) It’s not just that he had a famously snarky wit, or that he was a foodie who would have been right at home in the Bay Area (check out our list of Top 10 ‘alla Rossini’ recipes).

No, I celebrate Rossini because I’m an opera lover, and Rossini has a treasure trove of great music that is rarely heard. Seriously: the composer of The Barber of Seville wrote 40 operas, of which only three of the comedies (the other two being La Cenerentola (Cinderella) and L’Italiana in Algeri (The Italian girl in Algiers)) are regularly performed. Considering how many great tunes you find in those operas, imagine what’s awaiting you in La donna del lago (The Lady of the Lake) or Otello or Le Comte Ory (Count Ory).

Rossini was a contemporary of Beethoven and was as important an influence on the music of the 19th Century as the Big B himself. At a time when Italian opera was a hugely commercial product, Rossini was the Rodgers and Hammerstein of his day. When he went to France in 1823, the press reported on his every move (and we’re talking about a composer, not a singer.) When he went to London in 1824, he was given a hero’s welcome and the Royal Opera presented a whole season of only his operas. His style dominated Italian Opera up through 1850, even though he wrote his last Italian opera in 1822, and retired from opera composition entirely after William Tell (1828).

For a long time, Rossini was underrated as a composer because he worked in a commercial setting, wrote on deadline, reused music from his earlier works in later ones, and, like every stage composer, wrote a few flops. And, of course, his music has given way, in terms of influence, to the operas of Giuseppe Verdi. There’s no chance that Rossini’s Otello will regain the repertory importance it once had with Verdi’s Otello holding the stage. But the Rossini Foundation in Pesaro has taken charge of issuing new editions of all of Rossini’s scores, several generations of singers now have taken up the Rossini cause, and it seems likely that, even if the music is not the mainstay of Italian opera houses it once was, at least we have the ability to appreciate the works that launched the “Golden Century” of Italian opera. Cause for celebration, indeed.