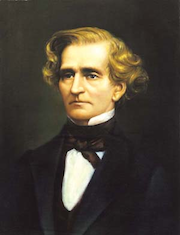 December 11 was Hector Berlioz’ 190th birth anniversary. He’s mostly known and loved for one composition: the Symphonie fantastique. Even he knew it — he completed a sequel, called Lelio, which sank like a stone at its premiere and has never recovered.

And yet the Symphonie fantastique (1830) was a remarkable accomplishment for a 27-year-old. Almost every facet of the work, from its harmony to its melodic motive threading through the five movements to its structure and conception, with a unifying, literary storyline to its orchestration, was revolutionary at the time. Berlioz kept revising it and didn’t publish the score until 1845, by which time, he had completed his equally groundbreaking Treatise on Instrumentation. He also changed the details of the symphony’s literary story several times, the last time in 1855.

Berlioz was one of those creative personalities who take rejection as a confirmation that they’re on the right road. His whole personality did not really mesh with the social norms of his time, so he accepted his outsider status and went on to create some huge and equally original works, which, equally, were mostly ignored until well into the 20th Century. Romeo et Juliette (1839), for example, was an enormous influence on the music of Richard Wagner and Franz Liszt, but was a bear for 19th-century orchestras to perform. Even now, the enormous and expensive forces required for its performance makes it rare on concert programs. But the “Queen Mab Scherzo” from the work is a common excerpt.

There are many, many fun facts about Berlioz. Find some of them, listen to the music and watch video at SFCV’s Composer Gallery page.