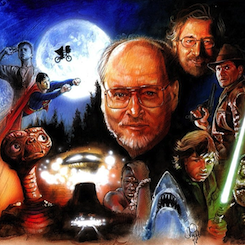 If you’re from my generation, composer John Williams provided part of the soundtrack of your youth. Even now, his scores and themes to the Star Wars trilogies, E.T., Raiders of the Lost Ark, and Superman are iconic. But Williams, who turns 82 this year, has a wide range in his work: Significant early scores of his include The Reivers (1969), Goodbye, Mr. Chips (1969), Fiddler on the Roof (1972), and The Cowboys (1972). His later work, after the success of his action scores of the late 1970s to early 1980s, is equally varied: Schindler’s List, Saving Private Ryan, Memoirs of a Geisha, Lincoln, and, most recently, The Book Thief.

Trained as a jazz pianist, the core of Williams’ style is still Romantic classical, and the touchstones for his musical themes and ideas are taken from the symphonic repertoire of the late-19th and early-20th centuries. In his great Star Wars scores, this attribute was highlighted because director George Lucas felt that it would be better to ground the outer-space story in an emotionally-familiar musical style. Williams has that rare ability to find the emotional center of a film and convey it in sound.

Because movie music hasn’t been taken seriously as a genre until quite recently, there are few classical music history books in which Williams would rate a mention. But that hardly matters. Whenever anyone begins to talk about the death of classical music, and how it doesn’t matter to people anymore, Williams’ achievements are a very good answer. Find out fun facts about John Williams, read his full biography, listen to music, explore fan links, and watch video on SFCV’s Composer Gallery page.