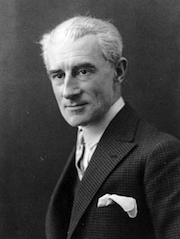 The composer Maurice Ravel is one of the guys who gives hope to B-students everywhere. He flunked out of the Paris Conservatoire in 1895, as a pianist, then returned to study composition with the brilliant composer and groundbreaking pedagogue Gabriel Faurè, only to be dismissed again in 1901. He tried five times to win the prestigious Prix de Rome (Rome Prize) and failed, the last time so miserably that the resulting scandal (for Ravel had been favored to win) caused the resignation of the director of the Conservatoire. Like many independent spirits, Ravel, whose 139th birthday anniversary is tomorrow, had his difficulties with authority.

You’ll often hear or read that Ravel was an “impressionist” composer, but you don’t have to believe it. It’s a term that loses whatever relevance to music it might have once we’re no longer talking about Claude Debussy. Ravel was born in the Basque country of the Pyrenees mountains and often found musical inspiration from the region, and returned to live there after World War I. But musically, he was a Parisian. He understood that city’s artistic community as much as any musician of the time, and profited from connections with many of them. In major piano compositions from the 1900s, like Pavane pour un infante defunte (Pavane for a Dead Princess, 1902) Miroirs (Mirrors, 1905) and the fantasy pieces Gaspard de la Nuit (Gaspard of the Night, 1908), you hear evocations of pictures and images, although the music is very original (and difficult to play — this guy was cut from the Conservatoire?)

Ravel’s biggest pre-war piece, the ballet Daphnis et Chloe has the ripe harmonies and lush orchestral sounds that dominated Parisian music of the time, but a change occured in the war years that kept Ravel in step with his colleagues. Le tombeau de Couperin (Memorial to Couperin, 1914-1917) is a deliberately spare evocation of 17th and 18th-century classical French music. La valse is a scathing portrait of Europe plunging toward a disastrous war. With the rest of the Parisian artists, Ravel had a fling with jazz, incorporating it into some of his popular scores of the 1920s and 1930s, like the Piano Concerto in G (1930). Bolero, Ravel’s often-played orchestra piece was conceived as an experiment, although not an avant-garde one.

Ravel is famous as an orchestrator, and his version of Mussorgsky’s Pictures at an Exhibition (which has been orchestrated well over 100 times) is a favorite concert staple. But almost every piece Ravel wrote is commonly played, a tribute to the composer’s genius and the care he took with each score. Find out more about Ravel, listen to his music, discover fun facts, watch video, and more at SFCV’s Composer Gallery page.