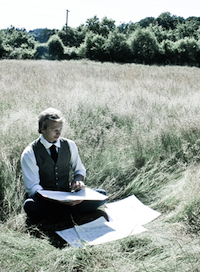 San Francisco Conservatory of Music has named the winners of three annual composition competitions. The honorees receive recognition, financial support, and world-premiere performances of their works. Tree Ride, a piece for orchestra by graduate student Justin Ralls, has won the Conservatory’s Highsmith Competition. The annual Hoefer Prize goes to composition department alumnus Ryan Brown (2005), who will write a work for the New Music Ensemble. And Alpine Scenes, a piano trio by graduate student Nathan Campbell, was selected to receive its premiere at the 2013 Shanghai-San Francisco International Chamber Music Festival held in Shanghai.

The competitions are open to current students and recent alumni, "showing a department that cares about supporting its students both inside our building and once they leave our halls," said Composition Department Chair Dan Becker.

The Hoefer Prize, funded from a bequest by former Conservatory trustee Jacqueline Stanhope Hoefer, will support Ryan Brown to write a new work for the BluePrint New Music Ensemble, to be performed and recorded under the direction of Nicole Paiement.

The Conservatory’s newest composition award is a consequence of the three-year-old Shanghai-San Francisco International Chamber Music Festival. A joint project of the Conservatory and its sister school, the Shanghai Conservatory of Music, the annual festival features new chamber works written by students from both schools. Nathan Campbell was chosen to represent San Francisco at this year’s festival in Shanghai.