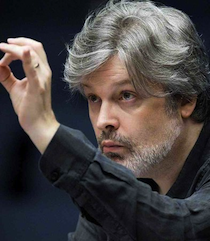 Friend and colleague Alexandra Ivanoff, expat classical music writer in Istanbul (and singer of the Ave Maria in the wedding scene of Prizzi's Honor), has pondered reviews of this weekend's San Francisco Symphony premiere of Drift and Providence by 'son-of-John' Sam Adams, both by Jeff Dunn and myself. Just as Jeff (and other writers), I found an obvious resemblance to film scores:

The 20-minute work does credit to the novice composer, with brilliant orchestration, a big sound, commanding interest — at least for a while. It has all the characteristics of a film score: It has atmosphere, it's accompanying, underlying something, but it's difficult to say what.

I've noticed that the music of most young composers I've heard in the last five years is heavily influenced by movie music of the epic genre. Close your eyes and it accompanies action or describes emotional scenes. Not that music in the past doesn't have these qualities, but the new stuff feels "filmic" in a way to suggest that John Williams has been a tremendous subliminal influence to everyone, whether they know it (or like it) or not.

I asked this question: "Do you hear a profound influence of film scores on young composers?" of James MacMillan at Grafenegg this summer, where he was composer in residence and giving seminars for young composers. His response was "Yes. At one time that would have been frowned upon. But it [Hollywood] has seeped into our subconscious and we're seeing lots of descriptive music being written now."

I have a name for the new genre: Silver Screen.