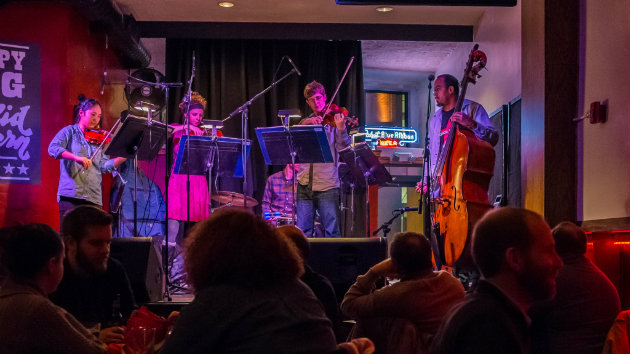 Mr. CutTime had intended to call his travelling band of classical musicians, Stravinsky Players of DSO — the Detroit Symphony Orchestra — but the county wouldn’t let him register that name because, after all, he wasn’t Stravinsky. Nor could he use DSO as an assumed name. So instead he called his group the CutTime Players, and from that he became known as Mr. CutTime.

“The name stuck,” he told us recently, “and proved to be a great choice because I use it as a way to say, ‘it’s time to cut loose with classical music.’”

Mr. CutTime, a former bassist with DSO, and otherwise known as Rick Robinson, took his band underground in 2010, becoming the Detroit Chapter of Classical Revolution, the taking-music-to-the-community movement started in San Francisco in 2006 by Charith Premawardhana.

Interestingly, Mr. CutTime (“two t’s please”) would never have been able to take his group to the streets, to bars and clubs and the like, to “the underground” as he puts it, had not Michigan banned smoking in public places. That was in 2009, and the next year Mr. CutTime began his odyssey as both musician and entrepreneur, which has earned him a Kresge Artist Fellow and financial support through an Art Challenge Grant from the Knight Foundation. 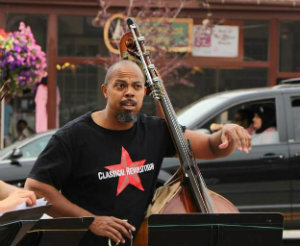 We spoke to Robinson, an African-American, about his work and asked about something he’d written in a blog entry: “Black people want black heroes even in classical music.”

“Just look at the Williams sisters or Arthur Ashe putting tennis on the radar for the black community,” he explained. “Breaking into something predominately dominated by whites always takes a heroic effort, and fierce independence to cut through that.”

He added that one of his role models was James DePriest (1936-2013), director of Conducting and Orchestral Studies at Juilliard for many years, as well as Music Director of the Oregon Symphony.

“I became aware of him,” said Robinson, “when I saw him on PBS conducting Mahler’s Fourth Symphony. He was immediately striking because, at that point, he was in a wheelchair.”

DePriest was left paralyzed in both legs after contracting polio in 1962.

“And there was something else: He was the only one of his color on stage, and he was apparently very comfortable with that. In those days most blacks in the world of classical music were singers or they played the piano, but here was someone leading an entire orchestra — in a concert hall filled with people that didn’t look anything like the people I’d grown up with.”

And one other thing that attracted Robinson to DePriest: “I don’t want to put it down to the fact that he looked exactly like me, but that was part of it.”

Robinson grew up in Highland Park, Michigan, at a time when the auto companies were moving out; Dutch Elm disease was setting in; rioters claimed the streets; and whites were in flight. He comes from a fourth-generation music family, going back to “the music man of Augusta Georgia,” a man named Dan Gardner, who was a band leader in the post-Civil War South.

Gardner’s daughter was a musician and composer. Her daughter, in turn, studied violin in the 1920s at Oberlin College, and her daughter, Robinson’s mother, continued the tradition; she played the piano and sang.

As an aside, it was Robinson’s older sister and brother, along with other local musicians, who persuaded violinist Joseph Striplin, one of the first black musicians at the Detroit Symphony in 1972, to lead a 12-member Highland Park chamber orchestra. “When I first heard them practicing Brandenberg 3,” says Robinson who was then 10, “I was moved to tears. I was struck by the counterpoints. The empathy. The journey within the music. I had heard classical music before but never a live performance.”

Robinson began his journey as a musician playing the cello, but then took up the bass, which he played at the DSO for 22 years. He left in 2013 to “fulfill the mission of developing the CutTime Players” and furthering his own classical music revolution. 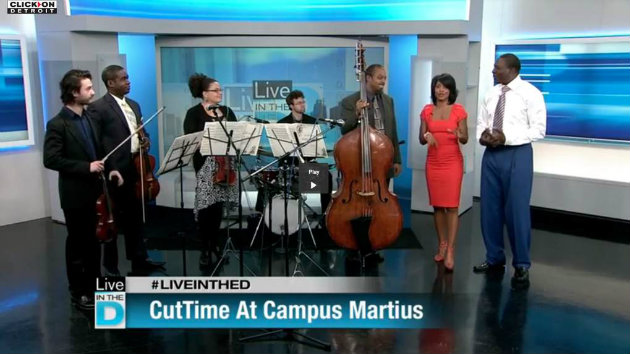 Interestingly, Robinson is the only black musician ever hired by a major American orchestra without going through an audition. In 1989, two Michigan state legislators led a vote to withhold $1.2 million in funding unless the orchestra hired more black musicians. There were three black musicians trying out for the orchestra. Robinson had an edge, having been a sub for a year-and-a-half.

“It was an emergency situation,” said Robinson, “but they felt comfortable enough with me to forgo the audition. So I decided to accept. But I never imagined that it might become international news because critics claimed that hiring someone without an audition would set a terrible precedent.”

Mr. CutTime’s revolution is based on the premise that the classical music experience is too invested in old models that defy change.

“What we need to do is reset the entire context for classical music. The music is for everyone, but I don’t think many people realize that because we don’t present it that way. The message underneath is always that this is only for the educated, for the discerning, for the refined — for the restrained — which is what the classical model seems to be built on. We don’t emphasize the public domain aspect.”

For Mr. CutTime, that domain combines the meditative quality of the concert hall and the “anything goes” ambiance of the club — where he takes it as a compliment if people tweet friends and spread his message.

“That’s why I don’t call these events ‘concerts’; it’s the opposite of a concert experience. It’s meant to be participatory in some ways. At CutTime events, I pass around shakers, cowbells, and tambourines. Sometimes, I interview people in the audience and I always encourage people to do what they do normally: to eat, drink and be social. If someone wants to get up and dance, that’s great.”

Robinson’s conviction is that the way to bring people to the spiritual nature of the concert is to show them to “how classical music works, why we choose this over, say Rock ‘n Roll, and just to spread the love.” He calls this new offering “New Classical” or “Club Classical.”

Among the innovations he’s helping to pioneer is a 1-to-10 rating system for audiences to help determine accessibility: 10 being a traditionally formal, “don’t-talk to-the-audience” concert; 1 being akin to a Sex Pistols concert. He says that most of his Classical Revolution Detroit (CRD) events fall between a 5 and a 6.

“If such a system could be developed, then we could pre-warn people about what they should expect. Part of the problem here is that concerts often just aren’t compelling because of repertoire or because of musicianship — because there’s no sense of direction, landing points, shaping, or phrasing. I think it’s incumbent upon musicians to make sure the performance grabs the audience by the lapels, and lifts them out of their seats.”

We’re not in the Music Business

Mr. CutTime has come to realize that he’s not in the music business but rather in the “inspiration business.”

“Car salesmen will tell you exactly the same thing, they’re trying to inspire people to buy cars.  So I’ve tried to become a better salesman.  I actually started by committing weekly to the telemarketing department at DSO, because they’re the people on the front lines doing a job that musicians themselves can’t do: sell concerts. I wanted to give our musicians every tool I could think of: describing why we do the music, how we make it valuable, along with knowledge about conductors and guest artists.”

In return, Robinson says he learned how to overcome objections and how to close a sale. “And from that I learned patience and persistence. I believe that’s the first step to becoming a better artist.”

“Every stage I’m on now I think of as being in front of the fireplace in a living room, even if it’s in front of 2,300 people at Orchestra Hall. As musicians we should speak with the intimacy that we do with family and friends. And if classical music can show a side that is humble, spontaneous, spiritual, open, and humanist, it can begin to fill in the buffer zones between groups.”