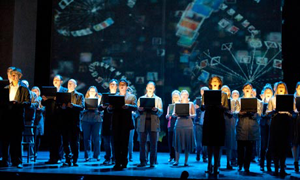 Martin Bernheimer’s essay on the upcoming Metropolitan Opera season tells of the work that will follow the Met’s season-opening Eugene Onegin:

It was bound to happen sooner or later. With Nico Muhly’s Two Boys, it has happened sooner. This adventure, which had its London premiere in 2011, officially brings cyberspace to the Met. The company prospectus describes it this way: “The opera explores the shadowy world of the Internet as a detective investigates the stabbing of one teenage boy by another — and discovers a tangled web of online intrigue.”

The libretto is the work of Craig Lucas, widely celebrated as a playwright, screenwriter, actor, and director of both films and plays. The staging has been created by another Broadway pro, Bartlett Sher, who makes imaginative use of video projections by an outfit called 59 Productions. Michael Yeargan serves as seasoned costume designer.

Muhly’s score has been cheered by some listeners for being accessible, derided by others for being too accessible. Apparently there are no ear- or earth-shattering clashes here. Still, Paul Levy of the Wall Street Journal has credited the composer for finding “an exciting new musical language.”

Two Boys stimulated considerable debate when it was first performed. Andrew Clark of the Financial Times found the score unchallenging yet liked its exploration of “the web’s demonic side — its capacity to induce psychological and physical violence.” He added that “the narrative — part thriller, part fantasy — has moral overtones without seeming to moralize.”

Unreservedly enthusiastic, Zachary Woolfe of the New York Times described the premiere as “a landmark in the career of an important artist,” and judged the vehicle “a work of dark beauty.” Even if the opera stops short of revolutionary agitation, its novel focus should attract the curious, stimulate the doubters, and please the cautious. Controversy can be useful. Performances are scheduled for Oct. 21, 25, 30, Nov. 2, 6, 9, 14.