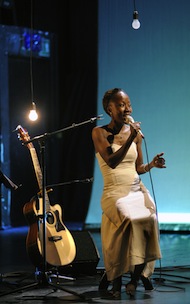 Nobel- and Pulitzer Prize–winning author Toni Morrison is hardly the first to attempt to fill in the blanks in one of Shakespeare’s plays. But she may be the first author not only to reimagine parts of the bard’s Othello, but also to give new life to one of his prime characters by allowing her to share the insights and wisdom that come with the passage of time after death.

As director Peter Sellars explained in a wide-ranging interview, a number of years ago Morrison challenged him to mount a production of Othello. At the same time she expressed dismay about the aspects of the lives of the play’s titular character and his wife, Desdemona, that she felt were missing from the play.

When Sellars’ Othello finally arrived at New York City’s Public Theater in fall 2009, Morrison determined to write a response to Shakespeare's play, which she titled Desdemona. This jointly commissioned music-theater work, has already been enthusiastically received in Vienna, Brussels, and Paris, and will have its American premiere in Cal Performances’ Zellerbach Playhouse, Oct. 26–29.

According to Sellars, the novelist conceived Desdemona in collaboration with him and the extraordinary West African singer Rokia Traoré. Now 37, Traoré was born in Mali to a musician-turned-diplomat father. When she was 4 years old, just as she was learning to speak her native language, Bamanan, her family moved to Brussels. Schooled in French, she subsequently accompanied her family on visits to France, Algeria, and Saudi Arabia. These travels, combined with a return to her homeland and lessons with master musicians, fostered a rare cultural and musical sophistication that transcends national boundaries.

Traoré’s peripatetic childhood also led to a curious disassociation from her roots, one that she addressed emotionally by beginning to write deeply reflective, soulful lyrics at the age of 14. Her career, launched when she was a college student, has so far produced four albums and earned her France’s Victoires de la Musique, BBC Radio 3’s World Music Award, a New York Times critic’s Album of the Year nod, and Songlines’ Best Artist Award. She currently tours, raises a son, and heads a foundation (Foundation Pascal) devoted to nurturing young artists in Mali.

Although Morrison and Traoré had met before Desdemona was conceived, it was Sellars who was “obsessed” with having the two women collaborate. He calls Traoré “one of the most thoughtful, penetrating, and insightful artists of her generation. She has an amazing perspective as a world citizen, and she has opened African music to encompass new areas. At the same time, she has brought the world to listen to Africa with a different kind of refinement and a different kind of interiority.” 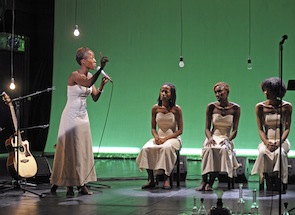 As Sellars explains, in Desdemona, Morrison “begins to fill in and imagine some of the backstories that do not appear in the play, and takes a few hints in the play and develops them out into what their real implications are.” In Act 1, Scene 3 of Othello, the black Moor, Othello, tells the Venetian Senate that he and his wife, Desdemona, who is white, fell in love as he told her stories about his life. Not only has Morrison written those stories, fleshing out some suggested by Shakespeare and conceiving new ones, but she has also supplied the missing link that brought the two characters together.

“Just before the extraordinary moment when Desdemona sings the ‘Willow Song,’ which of course Verdi immortalized, she says to her maid Emilia, ‘I learned this song from my maid, Barbary [Barbara], who died of a broken heart while singing it,’” says Sellars.

“That really interesting single line gives Shakespeare’s audience a truly amazing hint,” Sellars continues, “because in 1603 in London, ‘Barbary’ meant Africa. In 1600, at the time that the Barbary pirates had been hijacking British navy and merchant ships and enslaving the crews, there was a delegation of Barbary officials — ambassadors — who came to the court of Elizabeth to meet with her. It was the first time that London had seen Black people of high degree. It aroused enormous commentary in the press, as well as the typical jingoistic outrage that black people are meant to be slaves but a white person shall never be a slave.”

[Peter Sellars] calls Traoré “one of the most thoughtful, penetrating, and insightful artists of her generation.”

Morrison postulated that Shakespeare was telling his audience that Desdemona — a woman whom Sellars calls one of Shakespeare’s “most brilliant, inspired, and perfect creations: a young woman who’s generous, independent, and defies all social norms in her quest to make a new world” — was raised by an African maid on African songs and African stories. When the Moor and former slave Othello tells Desdemona his stories, she recognizes some of them as the stories she grew up hearing from her nursemaid.

Morrison seizes on what Sellars characterizes as “this little-understood fact” to reincarnate Desdemona as an older woman speaking from the other side of the grave. Morrison believes that, for the dead, the past and the future are the same, so she empowers Desdemona to move both forward and backward in time, reconsidering historic events and speaking prophetically about the world she’s still waiting for.

She also arranges a reunion between Desdemona and Barbary. In the course of the meeting, Traoré, the performer, sings eight songs. Two of the melodies are traditional West African classical; the rest are by Traoré herself. She composed lyrics to six of the songs, and Morrison wrote the other two. Among these is a new “Willow Song” that uses lyrics drawn from Shakespeare.

Morrison postulated that Shakespeare was telling his audience that Desdemona ... was raised by an African maid on African songs and African stories.

“Desdemona is an exchange between these two women, Desdemona and Barbary,” says Sellars. “As one sings songs, and the other tells stories, a composite world view begins to emerge — a shared space across continents, across cultures, across time periods — that illuminates some of the hidden corners of history with a magical sense of yearning and possibility.”

Traoré supplied her own unique perspective on the project.

“It’s so interesting for a woman to work on such a play about time changing,” she explained from her home-away-from-home in Amiens, France. “Things are not the same as they were centuries ago. It’s just unbelievable to feel like — through Toni Morrison, myself, Peter [Sellars], and all the people who are working on this project — we are giving the possibility to this woman to exist and express what she wants and doesn’t like. All these things were not possible, centuries ago, for women.

“Othello was a black man in a period of history where he started out as a slave. This is a modern collaboration between different people with no consideration of their origins or race or cultural background; what is most important is our artistic abilities. That is really great. This is definitely a 21st-century project.”

Although Morrison mostly presents Desdemona in the present day, the character constantly talks about her past. According to Morrison, after life is time, and with time, there is change.

“I feel so much emotion when I think about this,” says Traoré. “Desdemona wouldn’t have been able to talk freely 50 or 60 years ago. You can’t realize how much our world is changing. Even if there are many things left to do concerning tolerance, and realizing that one of our most interesting riches in this world is that we are different, very important work has already been done.”

Morrison had originally conceived Desdemona with just two women onstage, Traoré and an actress. Then, inspired by music with several voices, the personnel grew to five women onstage, plus two male musicians off to the side. The three women who assist Traoré and the actress, as well as one of the male musicians, are supported by Traoré’s foundation.

“The focus is on women, which is what Peter wanted,” Traoré says with a smile in her voice. “It’s all about women talking for women about a woman. Men are there for music, for light, and for sound — for anything else you can imagine. They are part of the show, but the focus is especially on women. It’s definitely something very ... woman.”