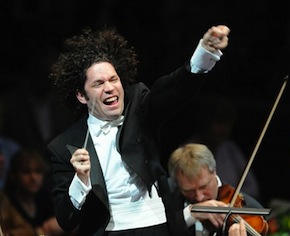 Now beginning his third year as music director of the Los Angeles Philharmonic, Gustavo Dudamel is finally emerging into clear view. The initial hype surrounding him — the lavish claims (not made by him) that he was the savior of classical music, the 60 Minutes features, the PBS specials, the documentaries, recordings, news articles, and performances broadcast in movie theaters — was so much noise, distorting perceptions. When it came to Dudamel, it seemed, you were either a believer or a doubter, for or against. There was no in between.

It all seemed a little unfair to the conductor, who was, after all, just a talented kid trying to establish himself with his new orchestra. He was given no latitude to fail, no time to grow into the job. That he appeared to be enjoying all the fuss focused on him, and even fed it (to a point), complicated matters.

The sound of the L.A. Philharmonic changed immediately under Dudamel, but it also lost some of the sheen and elegance crafted by Esa-Pekka Salonen, music director here for 17 years. Dudamel was more concerned with expression and expressiveness than polish. The change in emphasis required adjustments by the players, not accomplished overnight, especially since Dudamel’s presence in his first two seasons was sporadic. The strings all of a sudden were digging in with a new vehemence and richness, and everyone in the orchestra was putting more energy into their playing — a circumstance more conducive to excitement than to teamwork. The orchestra has gradually congealed under his leadership, but a national tour partway through his first season exposed Dudamel and orchestra to considerable critical sniping.

Dudamel’s readings of the standards are personal and alive with feeling, never routine or objectified.

What was obvious from the start, though, to my ears and probably the majority of others’, was that Dudamel, at 30, is an extraordinary musician who is able to galvanize an orchestra like few conductors at present. Minus the hype, this certainly would have been discovered and eventually celebrated. 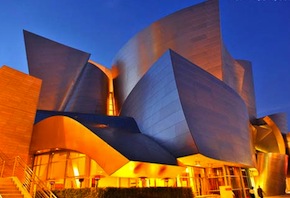 Is Dudamel a populist? He has professed to wanting to make classical music more popular, to wanting to bring it to “The People,” but if that is populism it comes without the pandering implied in the term. His programs remain resolutely serious, and his approach to them equally so. The Los Angeles Philharmonic is ramping up its educational activities with its YOLA program, an initiative modeled after Venezuela’s El Sistema (of which Dudamel is a product) and aiming to build youth orchestras throughout the area. The marketing has been ratcheted up. But in most ways, the orchestra is moving forward in much the same way it did under Salonen, drawing large, and youthful, audiences with a judicious combination of old and new music.

Dudamel’s strongest suit, perhaps surprisingly for one so young, is the standard repertoire, from Mozart through Mahler. This he conducts in a refreshingly Old School manner. Lyricism and expressiveness are his ideals, objectivity be damned. His Mozart is red-blooded, performed with a full orchestra. His Beethoven is in the heroic mode. His Brahms can be tender, his Mahler flexible and explosive. Most important, his readings of the standards are personal and alive with feeling, never routine or objectified. He puts his own thinking about them before the listener.

The subscription season opener this year, performed in Walt Disney Concert Hall, featured a program that was a microcosm of his musical concerns here so far. It began with an American work (John Adams’ brief Tromba lontana), segued into the U.S. premiere of a work from Latin America (Esteban Benzecry’s Rituales Amerindios), and wound up with Berlioz’ Symphonie fantastique. (These musicians perform the same program in Davies Symphony Hall on Oct. 24.)

In recent performances, the orchestra is increasingly responding with the kind of polish that will keep snipers quiet.

American music is a regular feature of Dudamel’s programs in Los Angeles, especially that of John Adams and Leonard Bernstein. (He has taken two of Bernstein’s neglected symphonies on separate tours with the orchestra, as well as works by Adams.) New music from Latin America, and not just of the picture postcard variety, also turns up often, introducing a vibrant and compelling contemporary scene in the southern continent. New music of other stripes is also regularly performed, continuing a tradition that Salonen established. (A Brahms festival last season paired each of the symphonies with contemporary works.) And lastly, the standards — his bread and butter — usually wind up Dudamel’s programs.

As a conductor of contemporary music, he is more reserved, but completely proficient, eschewing the sensational and personal for simplicity and accuracy. In concertos, too, he can sometimes seem too satisfied with leaving the show to the soloist. In these kinds of pieces, his conducting style becomes still and composed, feet firmly planted on podium and hair on head. He becomes more animated in the classics, but it would be a mistake to take that animation for mere flash. There’s method there, and a calculation to inspire the orchestra to play with the same energy. Even his balletic jumps are usually timed for important shifts in tempo, emphatically marking transitions.

In recent performances, the orchestra is increasingly responding with the kind of polish that will keep snipers quiet. The Berlioz performance on the season opener came together on all fronts, expressively and technically. The strings have never sounded richer or more powerful. As Dudamel’s busy third season (in which, for instance, he’ll conducts all nine of Mahler’s symphonies in four weeks) gets under way, he and the orchestra appear to be gelling as a team.

Their San Francisco programs are typical. In addition to the Adams, Benzecry, and Berlioz agenda, they will perform another, similarly structured on Oct. 23: Adams’ Short Ride in a Fast Machine, Enrico Chapela’s Magnetar, Concerto for Electric Cello (an L.A. Phil commission, with Johannes Moser as soloist), and Prokofiev’s Symphony No. 5.

Of course, conductors nowadays have to talk, as well, especially from stage at concerts. Dudamel has done this all along, but sparingly, presumably because of his limited English. Yet the situation is developing. The conductor gave a charming short introduction to Benzecry’s work on opening night. A week later, he served as host of the “LA Phil LIVE” presentation in movie theaters for the first time. And in San Francisco, he’ll take part in an American Orchestra Forum: Talking About Community, a series of public panel discussions in Davies Hall before the Oct. 23 performance.