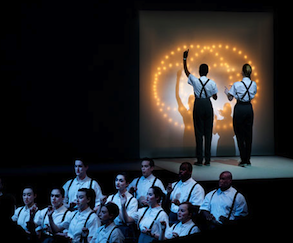 The Brooklyn Academy of Music premiere on Sunday of the revival of Philip Glass' 1976 Einstein on the Beach, coming to Cal Performances on Oct. 26, is described in The New York Times:

The electric keyboards and synthesizers of the Philip Glass Ensemble quietly played the low three-note organ drone that runs through the opening "knee play," as the creators call the five episodes that punctuate the major scenes of the opera’s four acts. Two compelling lead performers, Helga Davis and Kate Moran, dressed in baggy gray pants and white shirts with black suspenders, having moved incrementally toward seats onstage, began muttering together.

One spoke numbers randomly; the other recited a nonsensical yet alluring text by Christopher Knowles. ("Would it get some wind for the sailboat.") Before long, from risers in the pit, a dozen choristers dressed like Ms. Davis and Ms. Moran, their faces pasty looking, stood up and began singing Mr. Glass’s ritualistic music, some counting off various groups of numbers, others intoning the recurring drone bass on solfège syllables (la, sol, do) ...

Anthony Tommasini goes on to praise the work, and then makes a dubious claim:

Even when Einstein was here in 1992, the scars from that contemporary music battle were still sore. Now those bad times seem long gone. Composers do whatever they want to. Audiences are open to everything. Performers champion all styles.

Just exactly where are those "audiences open to everything"? Judging by programming of the major local opera and symphony organizations, those carefree audiences may not be hanging out around the Bay.