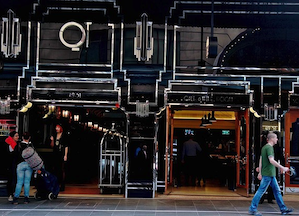 It isn’t often that one brand goes so consciously against the market grain, especially in financial times like these, but if this is the beginning of an accommodation revolution, then QT is on horseback at the forefront.

There is no beige here. No marble lobby, either. Indeed, the lobby is rather difficult to locate; tucked away off the street on the first floor of a fabulously unusual building. And though QT’s room rates start at an ambitious $450 — putting her on par with those more traditional upmarket peers — that’s about the end of their similarities.

Indeed, if Lady Gaga were to collaborate with a mischievous troupe of burlesque dancers, QT would be the net result. It’s hard to imagine an Intercontinental decorating their lobby with headless mannequins, or a Four Seasons programming their lifts to play a cheeky rendition of "All By Myself" each time someone takes a solo ride, but QT pulls it off with convincing panache.

It is this last item that caught our musical interest, and here is the skinny:

QT takes the hotel elevator experience way beyond "musak" with lifts that double as "interactive installations." Upon entering one of the hotel's five elevators, custom-designed software senses how many guests are occupying the space at any one time, and selects specific songs from rotating playlists to "match" the number of passengers, time of day and proposed mood.

If someone is taking a solo ride in a QT elevator, the one-person playlist kicks in with tracks like "Are You Lonesome Tonight?" by Elvis Presley or Eric Carmen's "All by Myself."

Upon a second guest's arrival, the QT Sydney elevator sensors will randomly select from the two-person playlist, including songs like "Just the Two of Us" by Bill Withers and "You've Got a Friend" by James Taylor. And when the count reaches four people, the songs switch into party mode, with crowd-pleasers in the AM such as "Summertime" by DJ Jazzy Jeff and the Fresh Prince and "Poison" by Bell Biv DeVoe. In the evening, the party really gets going with dance classics like Prince's "1999" and "Groove Is in the Heart" by Deee-Lite.

Go ahead and take a ride.