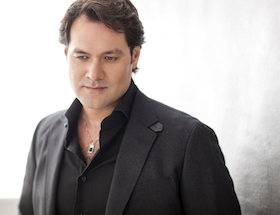 San Francisco Opera General Director David Gockley — often acclaimed in this column for his righting the company's fiscal rudder and his frank explanations of the difference between producing fantasy opera (bring back Die tote stadt, produce Schreker's Der Schatzgräber, and so on) and reality — will receive only a frown for his excesses in using English titles for operas from foreign lands (meaning 80-90% of operas, alas).

Maybe there was something to be said ("opera for the people!") for the likes of The Montagues and the Capulets, but the season-opening "Mephistopheles" masquerading for Mefistofele (called by its rightful name previously in the War Memorial) is just wrong. Will the folk supposedly unable to figure out the Italian title be more comfortable with the Hebrew "mephiz" (destroyer) and "tophel" (liar)?

Are we to see "The Lost One," instead of La traviata or "The Bohemians" replacing La bohème or how about crazy "Lucy of Lammermoor"? And, is it "Don Carlo" or "Don Carlos"?

San Francisco Opera's own uncertainty is reflected in constant changes over the years, and the inconsistency between what's advertised and what goes into the official archive. What was performed as The Makropulos Affair/Case is listed there by the proper Czech title of Vec Makropulos. There one sees justification for the English title, but the archive disagrees.

Why not stop at The Magic Flute, The Marriage of Figaro, The Flying Dutchman, and leave Mefistofele alone? Thank heaven for Tosca and her kin, impervious to translationitis.

Speaking of, yes, Mefistofele, you can watch the entire 1989 San Francisco Opera production, now revived to open the SFO season. Enjoy the Spanish subtitles. Do they call it "Mefistófeles"? No.