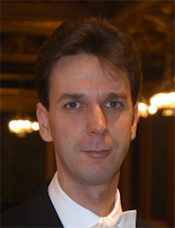 You can pick just about any program Michael Tilson Thomas leads with his New World Symphony in Miami and break out in invidia, one of the deadly sins. Last weekend's program there, as reported by Lawrence Budmen in South Florida Classical Review, was both challenging and rewarding.

The originally scheduled Schoenberg-Monn Cello Concerto was replaced by another rarity, Concert Waltzes for Four Cellos by 19th-century German cellist Wilhelm Fitzenhagen. Hungarian-born Tamás Varga, principal cellist with the Vienna Philharmonic, who was to be soloist in the Schoenberg, joined New World players Meredith McCook, Alexandra Thompson, and Kevin Kunkel in the Concert Waltzes.

A John Cage centennial festival in February features Joan La Barbara, Meredith Monk, Jessye Norman, Marc-André Hamelin, and dancers from New World School for the Arts in a lineup reminiscent of the SF Symphony centennial Mavericks event; beyond that, there will be concerts exploring 26 rarely-performed Cage works. Looks like Miami is a year-round maverick site.